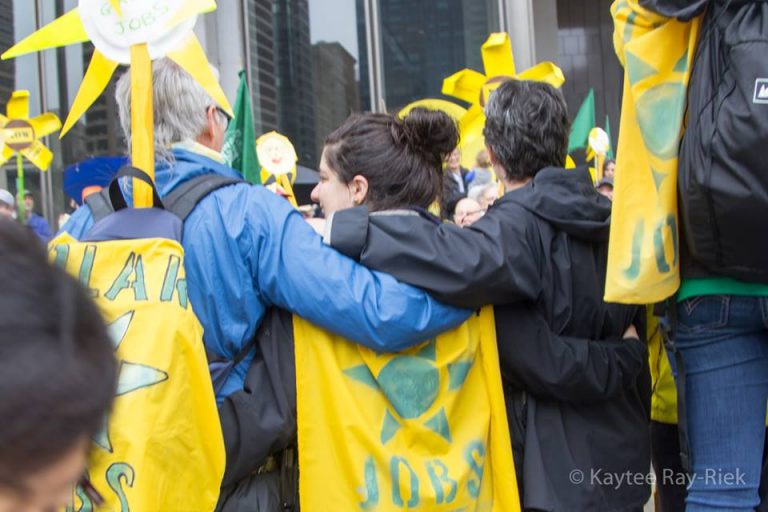 Above Photo: Earth Quaker Action Team members embracing at the end of the 100-mile Walk for Green Jobs and Justice in May 2017. (EQAT / Kaytee Ray-Riek)

After a year of working with people newly mobilized by the 2016 election, one organizing lesson feels particularly clear: People need to feel part of a community that is making change in order to stay engaged for the long haul. This realization may not be surprising, but it has practical implications for organizations and movements that want to grow — especially when outrage at the Trump presidency is still high, but the initial wave of protest has subsided.

The heightened need for community became immediately clear after Trump’s election. To help focus the many people desperate to do something useful, I decided to offer a month-long course through the online platform Zoom. Independent of any organization, and not knowing who would show up, I posted the idea on Facebook and soon had 180 people in the first round. I offered some basic social change theory, inspiring stories from the past, and a chance for participants to discuss their own concerns through the magic of Zoom’s small group function.

The first participants expressed huge relief at being part of a group, particularly one that included like-minded people from every region of the United States. Several asked how to find a group in their own area, and — in hindsight — I should have given more attention to this issue, which I had assumed would be easy to solve with a Google search. For many, it wasn’t that easy. After teaching six online courses (the next one on How to Build a Nonviolent Direct Action Campaign starts January 15) I’m convinced that finding a group where they felt both included and effective has been a key difference between the students who have engaged in meaningful, ongoing activist work and those who haven’t.

I might have predicted this from my own experience. For many years, especially when my children were young, I attended the occasional anti-war protest. Most often, I felt invisible at a gathering where no one bothered to say hello to me — let alone request my contact information, even when the gathering was small. Showing up once and never hearing from the group again, I also felt ineffective, with no sense that my sporadic actions were part of a larger movement. Eventually, I stopped showing up altogether, focusing on individual actions like taking short showers and composting my banana peels to combat climate change, which also left me feeling isolated and discouraged.

A turning point for me came in 2011 when I stumbled into Earth Quaker Action Team, or EQAT (pronounced “equate”), where I was warmly greeted and given a task within a few weeks of my first meeting. In its early years, EQAT didn’t always capture email addresses and phone numbers at our nonviolent direct actions, but eventually we learned to assign friendly greeters to rove the crowd with a sign-in clipboard. At our monthly meeting, we have participatory activities that invite newcomers to engage. We also have a snack table and a break during the two-hour meeting, simple ways to foster community.

Deeply engaging new recruits takes more effort, but it’s key to building people power. For example, last May, EQAT organized a 100-mile walk to pressure PECO, Pennsylvania’s largest utility, into making a major shift to solar and to do it in a way that creates jobs in low-income communities. Walking through Philadelphia and its suburbs, speaking at church halls and community centers along the way, we met many new people. Calling them all afterwards, inviting them to a training or some other next step, was a tremendous amount of work, but it helped us develop new leaders in the suburban counties. On December 7, we held a “Big Change for Solar Jobs” action at four PECO locations, featuring giant penny props representing the big change we need and people depositing a penny on their PECO bill to send a message that “small change is not enough.” While the optics and messaging were fun, the most energizing part of the day was the fact that much of the organizing had been done by people who had never led an action before. These new leaders reached out to their own networks, resulting in well-attended suburban actions and increased pressure on PECO.

Deeply engaging newcomers also gives organizers a chance to counter the despair and disempowerment that easily surface when people don’t see immediate results, especially in this political climate. More than in any previous year, I have heard newcomers ask, “What will this action accomplish?” It’s a great question. My answer is “Nothing. This action by itself will accomplish nothing. But during our successful campaign to get PNC out of financing mountaintop removal coal mining, we held 125 actions, and 125 actions was enough to win against a $4 billion-a-year bank.” Then I explain how the current action is one of many and that their arrival is a sign that we are growing and building the pressure on PECO through our geographic expansion, the same strategy that won against PNC.

Of course, this type of answer only works if you actually have a long-term strategy. In the wake of the election, thousands of local groups formed that gave people needed emotional support and focus in the early months of the Trump administration, but the level of strategic thinking in these groups varied widely. In my home state of Pennsylvania, a popular response to every Trump action was to call Sen. Pat Toomey in protest, despite the fact that the intransigent conservative had just been re-elected and was not particularly vulnerable to voter pressure. It didn’t take long for frequent phone-callers to start to feel discouraged. As time goes on, it will be increasingly difficult for local groups to keep people involved if they don’t see evidence that their actions are making a difference, or at least hear a compelling explanation for why staying the course will ultimately succeed.

In EQAT’s campaign against PNC, we did have a compelling explanation, but it was a strong sense of community and commitment to building our own skills that held the group together for a five-year campaign during which there were few outward signs that we were impacting our target. What signs there were, we celebrated — such as when PNC started locking us out of their bank lobbies, a move that could have disheartened us if we hadn’t framed it as a sign that we were getting to them. Activist communities today have to look for and celebrate such small victories. That doesn’t mean sugarcoating the political realities — just honoring the very human needs for hope and encouragement. Without them, people will stop showing up — just as I, and thousands of others, stopped showing up to protest the wars in Iraq and Afghanistan.

Some of my former students have already stopped showing up, but many have found fulfilling ways to stay active in their communities. Still, others are ready to move beyond simply calling their elected officials and are actively looking for the next group to join. For those of us who are looking to bring these folks in to our organizations, recognizing that they are looking for effectiveness as well as community can help us engage with them more successfully. Feeling that their involvement can in fact make a difference — with others and over time — is key to keeping them from sinking back into isolation and discouragement.

And it doesn’t hurt to serve snacks.