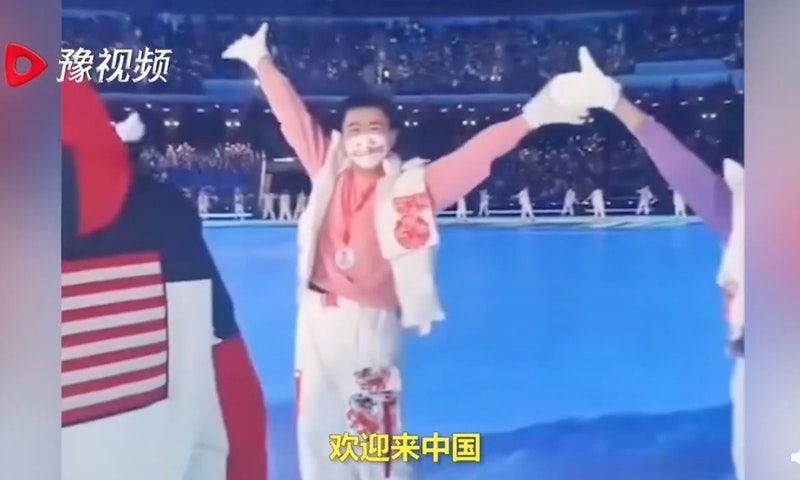 Tessa Maud And Aaron Blunk Didn’t Need To Use Many Words To Show Us That The U.S. Media Has China All Wrong.

Few events have been more politicized than the Beijing 2022 Winter Olympics. New cold warriors and atrocity propagandists led by the United States did everything in their power to generate popular support for a full boycott of the Games. NED-backed organizations formed a coalition for the cause, the corporate media engaged in a full-scale “China bad” propaganda blitz, and the political establishment got busy crafting several pieces of legislation to respond to the so-called “China threat.” Their efforts failed. To save face, the U.S. implemented a non-consequential “diplomatic boycott” that found support from only a handful of junior partners in the West.

However, failure didn’t put an end to the U.S.-led information war at the heart of the boycott campaign. American and Western mainstream journalists attending the Games have used the opportunity to intensify the spread of anti-China propaganda. Chinese American skier Eileen Gu has been repeatedly targeted for choosing to represent China. Her decision triggered an intense backlash rooted in racist attitudes which are prevalent across the U.S. political spectrum. Eileen Gu was repeatedly labeled a traitor to the United States and even The Nation, a so-called “progressive” media outlet, was willing to publish an article citing a literal white supremacist organization just to defame her.

“Progressive” media like The Nation hate designated hate groups and white nationalist organizations EXCEPT when the goal is to demonize China. Then they’re okay. pic.twitter.com/yQmhdIukZc

U.S. media propaganda only became more and more absurd as the Games moved forward. The smears against Eileen Gu continued, except this time with a liberal flavor. The New York Times and VICE attempted to portray Gu as an anti-hero of the feminist ideal; a successful young woman who chose to represent a country, China, which oppresses the majority of its women. U.S. corporate media also informed its audiences that Eileen Gu’s grandmother does not approve of her skiing career. The rumor mill surrounding Eileen Gu was entirely unsourced and merely exploited “woke” liberal talking points to further smear the young skier’s reputation—and by extension, China.

NBC spent nearly the entire opening ceremony repeating each and every talking point of the U.S.’s New Cold War against China. Furthermore, everything about the Beijing 2022 Olympics was labeled evidence of a China “dystopia.” Workers in hazmat suits pouring drinks? Dystopia! China’s use of fake snow, a common practice at prior Winter Olympic Games? Dystopia! American foods like French fries not up to American standards…in Beijing? Well, there’s nothing more dystopian than that!

I’m like 99 percent certain these reporters are deliberately ordering non-local food just to find something to complain about. pic.twitter.com/HT5u4DOMRl

Two U.S. athletes participating in the Winter Olympics effortlessly subverted these desperate attempts to defame China. U.S. snowboarder Tessa Maud used her TikTok account to chronicle her experiences in China. Maud frequently indicated that she was having the time of her life. A number of her posts praised the local cuisine available to athletes at the Games. Her genuine expression of appreciation for the staff and volunteers at the Winter Olympic Games went viral in China.

#OlympicTrivia:
US snowboarder Tessa Maud shared last day in China, saying she is sad & going to cry on the departure plane. Her earlier video talked about how she was warmly welcomed by volunteers, making her popular in China. #Beijing2022 pic.twitter.com/s5n4DbxZkj

U.S. skier Aaron Blunk offered stark criticism of the mainstream media’s coverage of the Olympics. Blunk stated that he “didn’t really know what to expect, being stateside you’ve kind of heard some pretty bad media, and that is completely false – it’s actually been phenomenal.” He followed these remarks with praise of China’s COVID-19 protocol and overall performance as a host, “Everybody – from staff, to Covid testers, to accommodation – it’s probably, honestly, one of the better Olympics that we’ve been to,” Blunk said.

Twitter rewarded Blunk by suspending his account in a blatant act of censorship. Blunk revealed through his honest account of the Beijing Olympics that not even the most reasonable criticism of the U.S.’s information war against China is allowable in mainstream circles. He responded by sharing a post on Instagram that contained the following question, “what’d I do?” That’s a good question. The answer is quite clear: speech is only “free” in the United States so long as it doesn’t anger go against the grain of the U.S.’s New Cold War agenda.

Another good question: Why did Tessa Maud and Aaron Blunk’s seemingly innocuous comments so powerfully challenge the U.S.-led propaganda war against China?Neither Maud nor Blunk made any formal political statement. They didn’t use their platforms to oppose U.S. military aggression, sanctions, or any other policy manifestation of the New Cold War against China. Maud simply had a great time at the Beijing 2022 Winter Olympics and appreciated the warmth that she received from the Chinese people. Blunk merely pointed out a discrepancy between what the U.S. media says about the Beijing 2022 Winter Olympics and the reality of the experience for athletes such as himself.

Maud and Blunk provided a great service to the cause of peace without even trying. The information war against China relies upon a steady stream of racism to legitimize the U.S.’s imperialist ambitions. China is portrayed by the U.S. and West as the quintessential communist nightmare. Chinese people in this scenario are nothing but robotic slaves to an “authoritarian” regime. Maud and Blunk’s willingness to tell the truth about their positive experiences at the Beijing 2022 Winter Olympics effortlessly subverted the dominant imperialist narrative about China.

Karl Marx taught us that the contradictions of a given phenomenon are in a constant process of change which is often characterized by conflict. The contradictions of the U.S.-led New Cold War have reached a particularly acute stage where the “China bad” narrative is completely discredited by the realities of the world situation. China’s successes in the areas of economic growth, technological development and poverty alleviation are recognized throughout much of the world. The U.S. has gained recognition as the biggest threat to world peace. This has caused a pressing dilemma for those committed to the hegemony-driven aims of the U.S.-led New Cold War on China. As the U.S.’s legitimacy wanes worldwide, its anti-China propaganda campaign has reached a feverish pitch to compensate for imperial decline.

Humanizing China represents a direct threat to the New Cold War agenda. China must be viewed as all “bad,” a modern-day fascistic terror on the world stage. If China’s prestige grows among Americans or Westerners, then the possibility emerges that the system of imperialism driving the New Cold War will be exposed as the true nightmare to humanity that it is. That U.S. athletes would praise China’s COVID-19 response or hospitality opens the door to friendship and cooperation with a so-called “adversary.” Any acknowledgement of China’s achievements is thus viewed as a crime of the highest order.

Tessa Maud and Aaron Blunk only touched upon a few of the qualities that made the Beijing 2022 Winter Olympics so significant for China. The Games also demonstrated China’s commitment to fighting the destructive impact of climate change. Venues were powered with one hundred percent green energy. China premiered the first automatic high-speed rail route to travel at a speed of 350km/hr for the Games.

The first train custom-made for the Beijing Winter Olympics set off on Thursday on the high-speed railway linking Beijing and Zhangjiakou, the co-host cities of the upcoming 2022 Winter Games. #GLOBALink pic.twitter.com/GYdzzdpwvG

In a demonstration of China’s technological prowess, the Beijing 2022 Winter Olympic Games were the first to use carbon dioxide instead of the environmentally-harmful substance, freon.

These achievements were summarily ignored by the “journalists” sent to Beijing to reinforce New Cold War propaganda. Instead, a U.S. media blackout of the true character of the Games was coupled with an endless repetition of lies and distortions. The Beijing 2022 Winter Olympics were thus treated as another target in the ongoing information war against China. The U.S. and its allies have made a calculated decision to reject the myriad of benefits that come from a friendly relationship with China in favor of a policy of containment and aggression. Luckily for us, there were U.S. athletes at the Beijing 2022 Winter Olympics willing to show us in their own way just how wrongheaded and counterproductive this policy is for humanity.