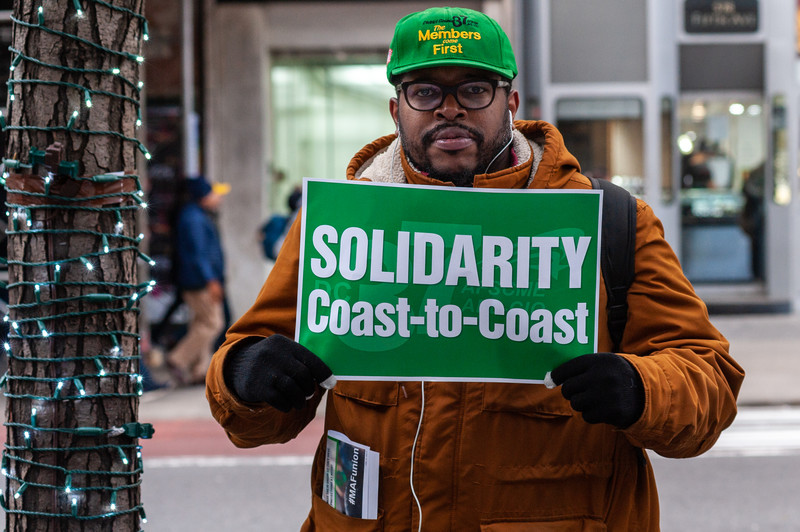 How Unions Are Backing BDS

Above Photo: Recent divestment resolutions in Oregon could lay the groundwork for bolder BDS campaigning within the labor movement. Gabriele Holtermann-Gorden / SIPA.

Major unions and labor federations in Oregon recently passed unprecedented resolutions calling for divestment from an Israeli company over its human rights abuses.

The resolution also calls on the state to implement a human rights screening for all future investments.

And just weeks ago, the Oregon Education Association, representing more than 40,000 teachers, passed a similar resolution at its convention.

The passing of these resolutions comes after multiple investigations revealed a shocking record of human rights abuses committed by governments around the world using NSO’s controversial Pegasus spyware.

Following these investigations, the NSO Group was blacklisted by the Biden administration’s commerce department.

The state of Oregon’s public pension fund is one of the largest investors in Novalpina Capital, the private equity firm which acquired NSO in 2019 – a move that the Guardian recently revealed was tacitly approved by Oregon state officials.

This isn’t the first time that Oregon’s state pension fund, valued at $100 billion earlier this year, has come under pressure. Local activists have been pushing for divestment from fossil fuels and private prisons.

But state treasury officials have repeatedly claimed that they are unable to divest because it would “put political or social goals first.”

However, those claims seem to be optional and based on perceived “enemies” of the US.

In March, state treasurer Tobias Read said that he would look into divesting from Russian holdings because “we support the people of Ukraine.”

This implies that companies such as NSO, which was recently deemed “valueless” to private equity backers, are otherwise financially sound investments for the state.

But as state lawmakers try to hinder human rights and climate divestment actions, labor is pushing ahead.

And their divestment resolutions reflect workers’ increasing solidarity with Palestinians.

In 2021, teachers’ unions in San Francisco, Seattle and Portland passed resolutions in support of the boycott, divestment and sanctions (BDS) campaign for the first time in the US.

The NSO divestment resolution moved by the Oregon Education Association was written by a teacher from the Parkrose Faculty Association – the Portland union which unanimously endorsed BDS last year.

Parkrose teachers held educational sessions for students and staff on BDS and Palestine during Israel’s attacks on Gaza in May 2021, and carried out the vote on BDS a few weeks later.

As an athletics coach at Parkrose, I spoke at an educational session and helped craft the language for the resolution, much of which was adopted from the San Francisco teachers’ successful resolution.

The passage of the Oregon Education Association’s NSO resolution was the logical next step for the Parkrose teachers to put their solidarity into action.

The language of the AFL-CIO/AFSCME resolution calls on the unions to urge the state treasurer and the Oregon investment council to divest from “all funds managed or formerly managed by Novalpina Capital,” including the NSO fund managed by Novalpina’s owner, the consulting firm Berkeley Research Group.

Meanwhile, the unions’ calls for the implementation of an investment screening for all state investments – and annual transparency on those investments – are significant for future BDS campaigning.

Even while NSO may be losing business, other Israeli and global surveillance companies are already taking its place.

And Israel’s Cellebrite, for example, has boasted of its cyberwarfare software being used by governments, law enforcement agencies and military intelligence in more than 60 countries.

Oregon’s resolution lays the groundwork for much bigger, bolder BDS campaigning within the labor movement.

A Portland-based coalition, Demilitarize Portland to Palestine, was formed in 2020 and has been campaigning for divestment from NSO since the news of its blacklisting broke.

The coalition – which includes Jewish Voice for Peace, Hurriyah Collective, Portland Democratic Socialists of America, Hindus for Human Rights, Critical Resistance Portland and others – works locally in Portland on a range of issues that includes Palestine solidarity, and many union members belong to these groups and have helped forge these connections.

Coalition members worked with union activists to share information about NSO and draft language for the resolutions calling for divestment.

After its passing, the Oregon resolution was sent to the National AFL-CIO leadership body.

This kind of partnership can be a template for the work that human rights activists should engage in with labor unions across the country.

Using broad human rights-based language to screen investments would make it possible for union members to make sure their funds aren’t invested in any companies that commit human rights abuses against Palestinians.

Labor activists could screen for a wide variety of corporate complicity in Israel’s crimes against Palestinians, drawing from the 112 companies listed on the United Nations Human Rights Council’s 2020 database.

Union organizing in the US is making gains not seen in decades, most recently with workers at Starbucks and Amazon achieving historic victories.

These kinds of campaigns are being led and supported by young workers and activists, including in Portland.

The Portland DSA also has a strong track record of BDS campaigning.

It’s not a coincidence that the labor movement and the Palestine movement are coalescing – these causes have long been bound together.

This divestment resolution lays the groundwork for a new generation of labor rank and file to continue mainstreaming support for Palestine, and to move that support into concrete action.

After all, solidarity with Palestine is a three-letter word – BDS.