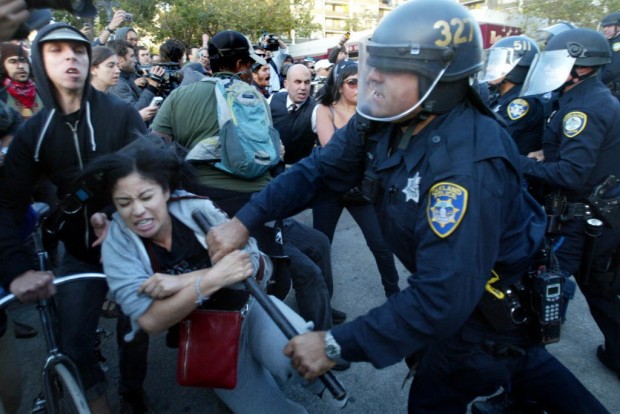 Above: Occupy Oakland Police use gas, flashbangs, clubs and fists It has been over two years since the Occupy Movement was brutally destroyed by a coordinated national effort led by the FBI and the Department of Homeland Security. Since that time, much documentation has been released under the Freedom of Information Act. Even though they are heavily redacted, these documents provide a frightening window into how far corporate America along with the federal, state, and local governments acting as their agents were willing to go to destroy a populist social movement like Occupy. Despite all the documentation we have, there are still many out there who are in denial about these facts. After reading some recent comments that misrepresent what happened to the Occupy Movement, I decided to review how Occupy was so brutally squelched by Wall Street and corporate America using government forces as their agents acting upon their behalf.
Terrorism.  The word alone can bring about unwarranted fear in otherwise normal people.  The images of the twin towers of the World trade Center were deeply etched into the American psyche and created a climate of intense fear which provided the rationale for the current “war on terror.”  But what is terrorism and how is a terrorist organization defined?  Let’s start with Merriam Webster’s dictionary which defines terrorism as thus:

“Domestic terrorism” means activities with the following three characteristics:   – Involve acts dangerous to human life that violate federal or state law; – Appear intended (i) to intimidate or coerce a civilian population; (ii) to influence the policy of a government by intimidation or coercion; or (iii) to affect the conduct of a government by mass destruction, assassination. or kidnapping; and -Occur primarily within the territorial jurisdiction of the U.S.

The first subsection of the definition is particularly important in that it requires an organization to be engaged in acts that are dangerous to human life and violate state and federal law.  I would argue that the Oath Keepers guarding the Bundy Ranch definitely met this part of the definition in that they physically threatened federal agents with high powered military style weapons.  Yet they were not treated as a terrorist organization. When the government’s reaction to the Oath Keepers’ threats upon federal agents is compared to the Occupy Movement, it is almost laughable that the FBI could consider Occupy a terrorist organization at all. There was never any remote indication that the Occupy Movement intended to do anything enumerated in subsection two.  But the FBI decided to categorize the Occupy Movement as a terrorist organization early on in its inception as evidenced by the FBI’s own documents that were obtained under the FOIA. (note: my bolding added for emphasis)

FBI documents just obtained by the Partnership for Civil Justice Fund (PCJF) pursuant to the PCJF’s Freedom of Information Act demands reveal that from its inception, the FBI treated the Occupy movement as a potential criminal and terrorist threat even though the agency acknowledges in documents that organizers explicitly called for peaceful protest and did “not condone the use of violence” at occupy protests.    These documents show that the FBI and the Department of Homeland Security are treating protests against the corporate and banking structure of America as potential criminal and terrorist activity. These documents also show these federal agencies functioning as a de facto intelligence arm of Wall Street and Corporate America.

Not only was Occupy, a peaceful public protest group, categorized as a terrorist organization for no legitimate reason other than they challenged corporate America and the big money on Wall Street, but the FOIA documents showed another equally disturbing aspect to the government’s coordinated effort to shut down and destroy the Occupy Movement.  Early on in the movement, the FBI was collecting data on many of the protestors, particularly those who may have appeared to in leadership roles.  This was clearly in violation of laws protecting the public from such intrusive investigations without a warrant or cause.

The FBI denied the surveillance accusations by saying that its investigation did not  include “unnecessary intrusions into the lives of law-abiding people” and that its prohibited from investigating Americans “solely for the purpose of monitoring activities protected by the First Amendment or the lawful exercise of other rights.” Of course, if you classify the actions as “domestic terrorism,” other rules apply.

The documents obtained by the Partnership for Civil Justice Fund clearly show that the Occupy Movement was targeted by the federal government as a terrorist threat from its very beginning even prior to the initial occupation of Zuccotti Park.

…the documents show that from the start, the FBI – though it acknowledges Occupy movement as being, in fact, a peaceful organization – nonetheless designated OWS repeatedly as a “terrorist threat”

Below is Part one of a video in which Amy Goodman and Juan Gonzalez interview Mara Verheyden-Hilliard of The Partnership for Civil Justice Fund.

Part 2 is a continuation of the same interview with Mara Verheyden-Hilliard of The Partnership for Civil Justice Fund.  If you watch only one part, watch Part 2, keeping in mind that Edward Snowden’s revelations had not yet come to fore.  Ms. Verheyden-Hilliard’s remarks are very prescient, in light of the knowledge about the NSA and the security state.  It is fascinating to watch these videos from late 2012, knowing what we know today.

As detailed at multiple sources, including an excellent article in the Guardian by Naomi Wolf, the extent by which the government and private corporate interests had merged their surveillance and ultimately coordinated the brutal crackdown on the Occupy Movement is shockingly reminiscent of other totalitarian societies.  (note: my bolding added for emphasis)

The document – reproduced here in an easily searchable format – shows a terrifying network of coordinated DHS, FBI, police, regional fusion center, and private-sector activity so completely merged into one another that the monstrous whole is, in fact, one entity: in some cases, bearing a single name, the Domestic Security Alliance Council. And it reveals this merged entity to have one centrally planned, locally executed mission. The documents, in short, show the cops and DHS working for and with banksto target, arrest, and politically disable peaceful American citizens.

So why was Occupy singled out for such brutal treatment while other, more violent and extreme organizations have been given a pass?  There can be only one reason.  By its presence and its message, Occupy posed a huge political threat to the big money power brokers on Wall Street and elsewhere in the corporate America.  Occupy’s message about the 99% had the potential to make it become such a strong nationwide social movement that the politicians would not be able to ignore it.  Occupy had to be stamped out early on and its participants had to be made an example of to deter future public social movements that might challenge the power of big corporate money.One thing is abundantly clear despite those who defend the current administration’s action on this, and that is that Occupy was targeted by a nationwide effort which was coordinated through the FBI and the Department of Homeland Security acting on behalf of big money and corporate America to ensure that it would not succeed. What happened to Occupy should serve as a warning to everyone about the dangerous fusion of corporate interests and our public institutions. The corporate capture of our government institutions is dangerous to us as a free people.  Those who fail to learn from the history of how the Occupy Movement was suppressed will be doomed to have it repeated upon them.