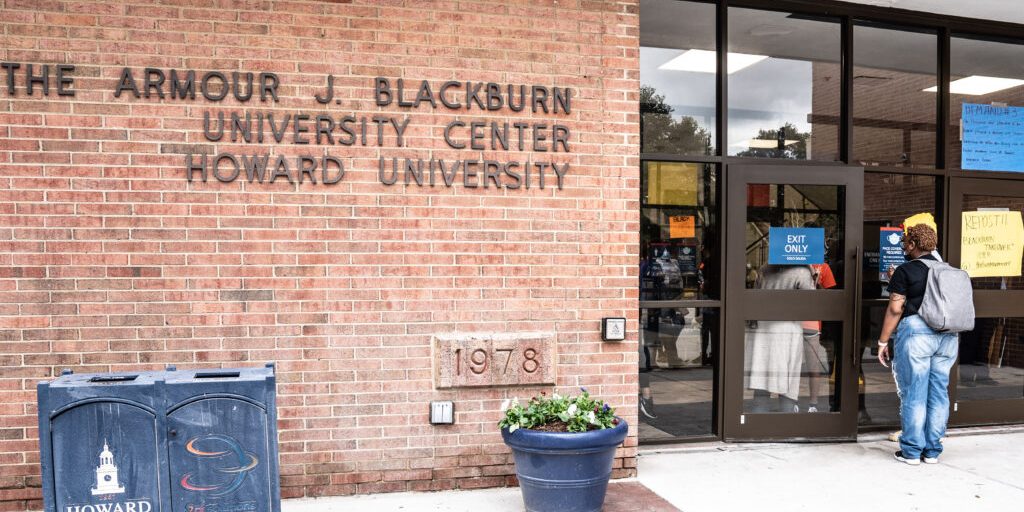 Amid a nearly month-long student protest, Howard University President Wayne A.I. Frederick attempted to correct course during a semiannual state-of-the-university address, acknowledging some of the issues that have sparked an ongoing occupation of a campus building.

“The current events that are taking place on campus are very important. I hear the concerns, I want to be absolutely clear about that,” Frederick said. “We apologize for anybody that was inconvenienced in any way, shape, or form.”

Originally slated to occur on Oct. 22, during Howard’s homecoming weekend, Frederick delayed the speech to Friday. With protests ongoing at the time — nearly 150 students were camped out near or inside the Blackburn Building — Frederick said it felt appropriate to postpone, so his remarks would not serve as a “counter-narrative” to students’ demands.

As he delivered the speech virtually, student demonstrators continued their sit-in, occupying the Blackburn building and sleeping in tents outside— a response to poor and unsanitary housing conditions and other issues. Since the sit-in began on Oct. 13, students have vowed not to leave the building until administrators agree to meet their demands, which include rectifying unsafe housing conditions, crafting a housing plan for freshman, and putting students, faculty, and alumni back on the board of trustees. Now nearly a month into the protest, Blackburn Takeover has gained national support; Sen. Elizabeth Warren (D-MA) pledged her solidarity with students on Twitter, and Rev. Jesse Jackson visited the school to show his support. (He was hospitalized during the visit after a fall, but has since been released.) Rapper Gucci Mane and other performers on his record label, who were expected to perform at the university’s homecoming celebration, pulled out to show support for the student’s demands. Local lawmakers like At-Large Councilmember Anita Bonds and Ward 4 Councilmember Janeese Lewis George have also supported the protesters.

During Friday’s address, Frederick outlined several housing issues identified this semester, including mold in dorms that protesters claimed has reportedly caused some students to be hospitalized. According to Frederick, mold was reported in 41 of the university’s 2,700 rooms, and that execution of preventative maintenance work has been spotty across buildings. He also added that some of the mold may have resulted from water damage that was caused by “accidental humor error.”

“I think where we’re lacking, and we have to do more, is in preventative maintenance, so avoiding trouble when issues do occur, responding to them quickly so that many residents are not inconvenienced for any length of time,” Frederick said. “I certainly take full responsibility for that. I think that’s one of the areas that we’ve fallen short on and one of the areas that we certainly intend to improve.”

Frederick said that the university is inspecting and testing dorm rooms for mold, ramping up regular cleaning of buildings, and adjusting school communications, among other improvements.

During a question-and-answer period at the end of Frederick’s remarks, where he answered pre-submitted and selected questions, he addressed another demand from protesters: that students, alumni, and faculty be reinstated on the Board of Trustees. (The board voted to reorganize its structure in June, eliminating those roles.) Frederick didn’t seem to signal that those positions would return, but instead touted the new ways the board is seeking engagement from the community, including listening sessions and an expanding leadership academy for students and alumni.

“It’s a different mechanism, it’s a different look to the future,” Frederick said. “My advice to us as a community is that we give it an opportunity, so that we have a sense of what that looks like, to make sure that everyone has a voice and can participate. How you express that voice and where you apply it, you know, it’s different.”

Frederick’s remarks come a little over a week after he published a letter condemning the takeover of the Blackburn Building, and demanding that it end.

“There is a distinct difference between peaceful protest and freedom of expression and the occupation of a University building that impedes operations and access to essential services and creates health and safety risks.” he wrote.

“Sodexo respects the students’ right to a peaceful protest. Due to the closure of the Blackburn Center, Sodexo is unable to operate its usual dining function,” reads a statement from a Sodexo spokesperson, sent to DCist/WAMU. “As a result, we laid off some of our staff and moved others to other locations on campus, where possible. Upon reopening the Center, all displaced employees will be able to return to work based on their seniority.”

In a press release issued Friday before Frederick’s speech Friday, The Live Movement, a coalition of students from historically Black colleges and universities leading the protests, called for Frederick to resign.  Student organizers say Frederick’s most recent remarks haven’t changed their stance.  Jasmine Joof, a sophomore with The Live Movement, told DCist/WAMU that the group’s demands still have not been met, including a request for the university to provide legal and academic immunity to students who are protesting, essentially protecting them from academic or legal discipline. (During Friday’s address, Frederick said he can’t provide legal immunity, as not all protesters are Howard students.)

“The university has tried on multiple occasions to meet the demands on their own terms,” Joof told DCist/WAMU on Saturday morning. “He’s just trying to save face, so [he] can be like, ‘No, I have a done a Q&A, and I was listening to students voices,’ which just isn’t true.”

According to Joof, students will remain protesting inside and outside the Blackburn building.