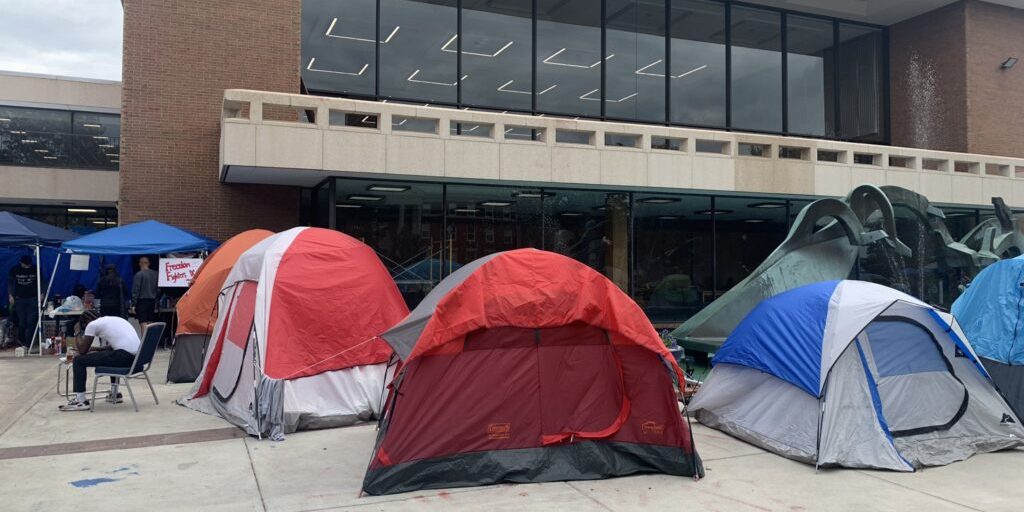 Above Photo: Dozens of students have been camped outside the Blackburn University Center since Oct. 12 in protest of unsanitary living conditions at Howard University. Elliot C. Williams / DCist/WAMU.

In an open letter published Tuesday, Howard University President Wayne A. I. Frederick wrote that students’ two-week occupation of a campus building in protest of poor housing conditions and other issues “must end.”

Students have occupied Howard’s Armour J. Blackburn Center for two weeks, vowing to stay put until the university remediates mold in students’ dorms; creates a housing plan for incoming freshmen; and reinstates student, faculty, and alumni members to the university’s Board of Trustees, among other demands.

Alumni, local activist organizations, and public figures have shown support on social media for what’s being called the Blackburn Takeover.

I am both disappointed to hear the concerns of students at #HowardUniversity & proud of them for their bravery throughout this peaceful sit-in. Historically, students & young people have been the life force of many movements, including ones led by my father. #BlackburnTakeover

But Frederick expressed little patience for the ongoing demonstration in the open letter, saying the university has “engaged in a discussion” with leaders of the student protest and that the sit-in is creating problems for students and staff.

“Howard University’s proud tradition of student protest has never been — and can never be — invoked as a justification for tactics that harm our students,” the president wrote. “The current occupation of the Armour J. Blackburn Center is a departure from past norms. There is a distinct difference between peaceful protest and freedom of expression and the occupation of a University building that impedes operations and access to essential services and creates health and safety risks.”

Frederick’s letter did not specify what those health and safety risks are, or what operations and essential services have been disrupted by the protest. Howard University’s COO, Tashni-Ann Dubroy, posted on Twitter that protestors are “trespassing and creating food insecurities for their peers.” One of two campus dining halls is located in the Blackburn Center.

“This was my dream school from 6 yo. I ❤️ #HowardUniversity. But just because I ❤️ Howard does not mean I cannot hold my school accountable”

The university leader added that mold isn’t widespread in the dorms, and that “the vast majority of our students are living comfortably in their rooms.” He pointed to the institution’s recent investments in capital improvements on campus, saying the administration “has not lost focus of our goal to marry the Howard real estate footprint with the Howard brand.”

School administrators have warned demonstrators they could be suspended or expelled for continuing to occupy the building.

In response to Tuesday’s letter, the group Live Movement — a coalition of students from historically Black colleges and universities who advocate for education reforms — said Frederick continues to evade students’ concerns.

“His focus is still not meeting our demands, but getting us out of this building. He must not understand that the only way we’ll leave this building is if he meets our demands,” the Live Movement posted on Instagram.

Organizers have launched an online petition calling on the university to cut ties with Corvias Inc., a company that Howard contracted in 2016 to manage its dormitories through the year 2056. “As long as Howard University has an active contract with Corvias, Howard’s housing conditions on campus will suffer,” the petition reads.