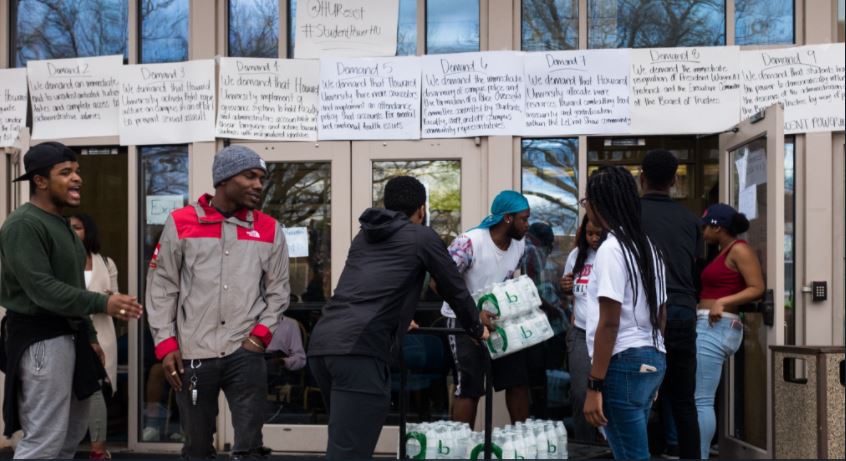 Above from @StaceyLewis  “A few photos from the sit-in at #howarduniversity. The scandal with the financial aid employees is the last straw but there are much deeper systemic corruption issues at the #hbcu and the students are fed up! #HUResist #studentpowerhu”

Washington, DC – Hundreds of Howard University students are in their third day of an occupation of four floors of the administration building. They are planning Easter services on Sunday at 9:30 am.

The student newspaper, the Hilltop, describes how the occupation began on Thursday:

The “takeover” of the Mordecai Wyatt Johnson Administration building, organized by the campus protest group HU Resist, was preceded by a “darty” (short for “day party”) on the university green at noon. Shortly before 3pm, HU Resist members and other students began flooding online group chats and walking across campus with megaphones in order to recruit students to join the protest inside the A-building.

The next day, students covered all the exits to prevent personnel from entering the building and putting a stop to the functioning of the building. The Hilltop reports the students do not plan to leave. “Much like the takeover of the A-building by Howard students 50 years ago this month, the protesters today expressed that they would be staying as long as necessary until their demands were met.”

Students brought their laptops and had pizza as the night began. The Hilltop reports, “Prepared to stay the night, some brought air mattresses and pillows, while another setup gaming console. Students continued to echo chants like “I love being black” and “Whose building?/Our building” in between stretches of homework. An impromptu dance party broke out after a protest leader announced that Rihanna had tweeted about the event.”

The students took the 4th floor, which houses the Office of the President and Vice Presidents, the next morning.

The occupation was ignited by the recent revelation that over a million dollars were stolen via tuition reimbursements from 2007 to 2016, but the students’ demands were broader. The students issued a statement of demands that included, among other issues, the University provide adequate housing for all students under the age of 21, an immediate end to unsubstantiated tuition hikes and complete access to administrative salaries, actively fight rape culture on campus in an effort to prevent sexual assault, the University implement a grievance system to hold faculty and administrators accountable in their language and actions toward students with marginalized identities, and the immediate disarming of campus police officers and the formation of a Police Oversight Committee controlled by students, faculty, staff, and off-campus community representatives. The students are also calling for “the immediate resignation of President Wayne A.I. Frederick and the Executive Committee of the Board of the Trustees”

A statement released by Stacey J. Mobley, the Chairman of the Board of Trustees, expressed that the concerns that were communicated were “inaccurate,” and followed by addressing the issues that were raised, and how the university has been working to mend these problems.

The protest was organized by HU Resist, which generated controversy during the Fall 2017 Convocation. HU Resist protested FBI director James Comey with chants like “we shall not be moved” and “James Comey, you’re not our homie.”

Good Morning! We have entered the 3rd day of Occupation. We are thankful for the donations and everyone who is standing in solidarity with us. We are also so thankful to every student who continues to help us occupy this building and make it a safe space. #StudentPowerHU

Wayne Frederick DENIED students financial aid while the university was stealing our money. Howard University has failed us. #StudentPowerHU https://t.co/bkXakjN0gl

The long held suspicions that our university is stealing money from us have been confirmed. We deserve better. We demand better. It time to take back our university #StudentPowerHU#FrederickMustResign

Students hanging our demands outside of the administration building #StudentPowerHU pic.twitter.com/D3NpPxCSsz

One of the demands is to disarm the university police. Like why do they have guns? No evidence of them prevent or stopping “crime” & students frankly don’t want them here #StudentPowerHU pic.twitter.com/0bqByXZIRk

But this is what they don’t show you, I wish people that know nothing about HU would stop trying towrite our narrative #StudentPowerHU pic.twitter.com/VHK3LpTvjR