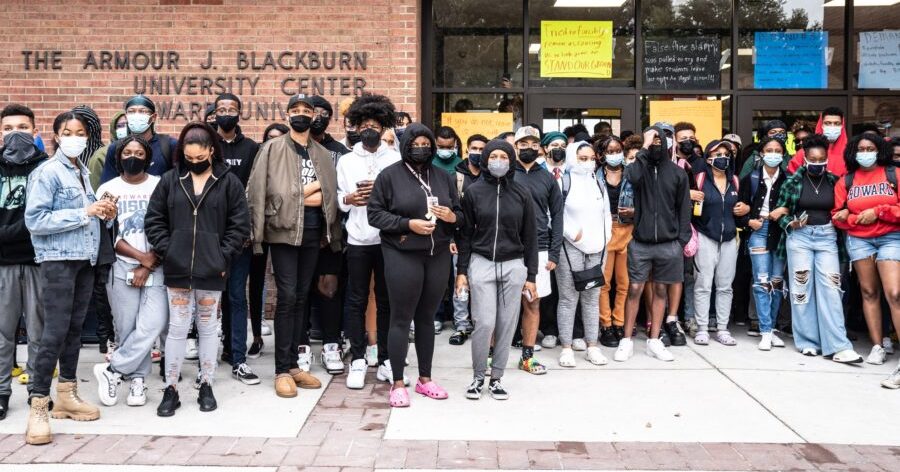 Above photo: On Oct. 13. 2021 Students gather in front of the Armour J. Blackburn building as student protestors occupy the space inside. DCist/WAMU / Dee Dwyer.

Students with the group Live Movement, a coalition of students from historically Black colleges and universities who advocate for education reform, began their sit-in at the Blackburn University Center Tuesday evening to demand university officials, including President Wayne Frederick, agree to a town hall meeting by the end of the month to negotiate their demands. Protesters say they will not leave the university center until officials agree to enter talks.

The protesters are demanding that university officials make a housing plan for incoming freshmen, and that all students, faculty, and alumni be reinstated as voting members on the university’s Board of Trustees. Organizers told DCist/WAMU Wednesday morning that they may make additional demands, but would not reveal them.

Scott said the students invited faculty and administration officials to a town hall Tuesday night to address some of their concerns. Instead, police arrived on campus and tried to remove students.

“Not a single administrator showed up even though they were invited multiple times by the [Howard University Student Association] and other student groups,” Scott told DCist/WAMU. “Instead of meeting our demands, they instead met us with police.”

Students in Blackburn could be seen Tuesday night on Instagram videos and images snoozing in sleeping bags, making speeches with bullhorns, and posing questions to a school official, who was not identified. One student asked, “why is there no mandatory [COVID-19?] testing on campus?” Another asked, “What is being done about the mold issue on campus?” And a third, “what do we do on campus if the blue security lights aren’t working and you’re in trouble?” (Blue lights are a campus wide alert system in which students in distress can hit a button and campus police should respond promptly.)

“We’re Black,” the student retorted. “I don’t recommend anyone here to call the police.”

Between Tuesday night and early Wednesday morning, multiple students told DCist/WAMU that administration officials and police ripped down the protesters’ banner, pulled the fire alarm alerting firefighters to the building, tried to forcibly remove students from the building, and closed the Blackburn building. As of Wednesday afternoon, students were no longer allowed to enter the Blackburn building, though those who had slept there Tuesday night remained inside.

“This isn’t how we should be treated by our university. Howard University is supposed to be illustrious” Scott said. “But when it comes to protecting the people that are here, and Black issues, clearly they’re not meeting us…unless media presence or unless everyone is watching.”

Cynthia Evers, the university’s vice president of student affairs, told a DCist/WAMU reporter on the scene that any students remaining in the building after noon on Wednesday could be suspended or expelled.

But students don’t plan to back down.

“None of our demands have been met,” Aniyah Vines, one of the group’s lead organizers, told DCist/WAMU Wednesday morning. “They didn’t say they would try to push us out, so we’re not going anywhere.”

By Wednesday afternoon, hundreds of students stood outside of the Blackburn building chanting, “enough is enough!”

The university did not respond to additional requests for comment.

One onlooker, Lex H, a grad student who preferred to only give her last initial, told DCist/WAMU Wednesday morning that while she supports the students’ right to protest, she was disturbed by the presence of police on campus.

“Despite the fact that [the police] are servants of the students,” Lex said. “I’m likewise disturbed by the fact that the [MPD] was even allowed on campus, but also their aggressive attitude toward students which kind of represents their larger attitude toward the Black community as a whole.”

The protest comes after a contentious debate between faculty, students, and 32 members of the Board of Trustees, which is responsible for controlling and directing the affairs of the university, about who is allowed on the board.

In June, the school’s Board of Trustees unanimously voted to eliminate the faculty, student, and alumni positions after they conducted an “extensive review” with an external firm, Laurence Morse, chair of the board explained in an announcement.

“There was overwhelming consensus that our current process of governance and engagement across the university, from the Board through various stakeholder groups, is not working,” wrote Morse. The board held a virtual town hall meeting with stakeholders in late June.

“It was a complete surprise to us….It was a town hall in name only,” Associate Professor Marcus Alfred, chair of the faculty senate, told DCist/WAMU. “Questions had to be submitted in advance to the board.”

According to Alfred, the board never released the findings of the review to faculty or students. Last week, the faculty senate council voted to stand with both the students and alumni to oppose the board’s action.

“Students took over the administrative building decades ago to establish these positions [on the board],” he said. “It’s hard for us to understand how they would get rid of these affiliate positions when it’s clear the board needs to dialogue with students and faculty a lot more.”

The Howard University Chapter of the NAACP also vowed their support to students in an Instagram post. On Twitter, the university’s NAACP wrote that they will “help advocate for any students facing disciplinary action from the school.” The organization posted the students’ demands in a petition; as of Wednesday morning, there were 1,014 signatures.

This isn’t the first time students have occupied a building on campus to protest school policies. In 2018, students’ list of 11 demands–including an overhaul of the school’s sexual assault policy, the creation of a food bank to serve students and the wider community, and a review of policies allowing campus police to carry weapons–were met following a 9-day protest occupying an administrative building.