Throughout 2017 to 2019 West Papua1 continued to be the hot spot of human rights violations and conflict in Indonesia. The patterns of human rights violations strongly differ from other regions in the archipelago due to the unresolved political conflict, racism and serious development deficits. On the one hand the human rights situation over the past two years was characterised by stagnant, re-occurring patterns of violations – an indication of the government’s lack of affirmative action in respecting, protecting and ensuring human rights. On the other hand, the human rights situation for particular groups has significantly deteriorated. These developments are related to growing aspirations for self-determination among indigenous Papuans and the aggravation of armed conflict in West Papua, which peaked in the killing of 19 government contractors and subsequent security force operations in the regency of Nduga since early December 2018.

Download will be available in a few days here:

Download the full report in Bahasa Indonesia (coming later in 2020)

Statistical data on civil and political rights for 2017 and 2018 indicates that – despite a few positive trends – fundamental rights and freedoms in West Papua are still subjected to severe restrictions. Impunity for perpetrators of the security forces continues to be among the key issues, creating an environment in which the right to life and prohibition of torture is not respected by security force members.

While statistical figures indicate stagnation with regard to torture, political arrests and prosecutions as well as freedom of expression, they illustrate a significant increase in threats, and obstruction or intimidation against human rights defenders. The number of victims of extra-judicial killings in 2018 was the highest annual number in the past six years. The majority of victims of civil and political rights violations throughout the reporting period were indigenous Papuans. The figures mirror the deeply rooted patterns of racial discrimination in West Papua. Treason charges were less often used than in previous years to prosecute peaceful political activism. Instead, authorities use other vague criminal provisions or laws, such as the emergency law or the electronic information and transaction law. 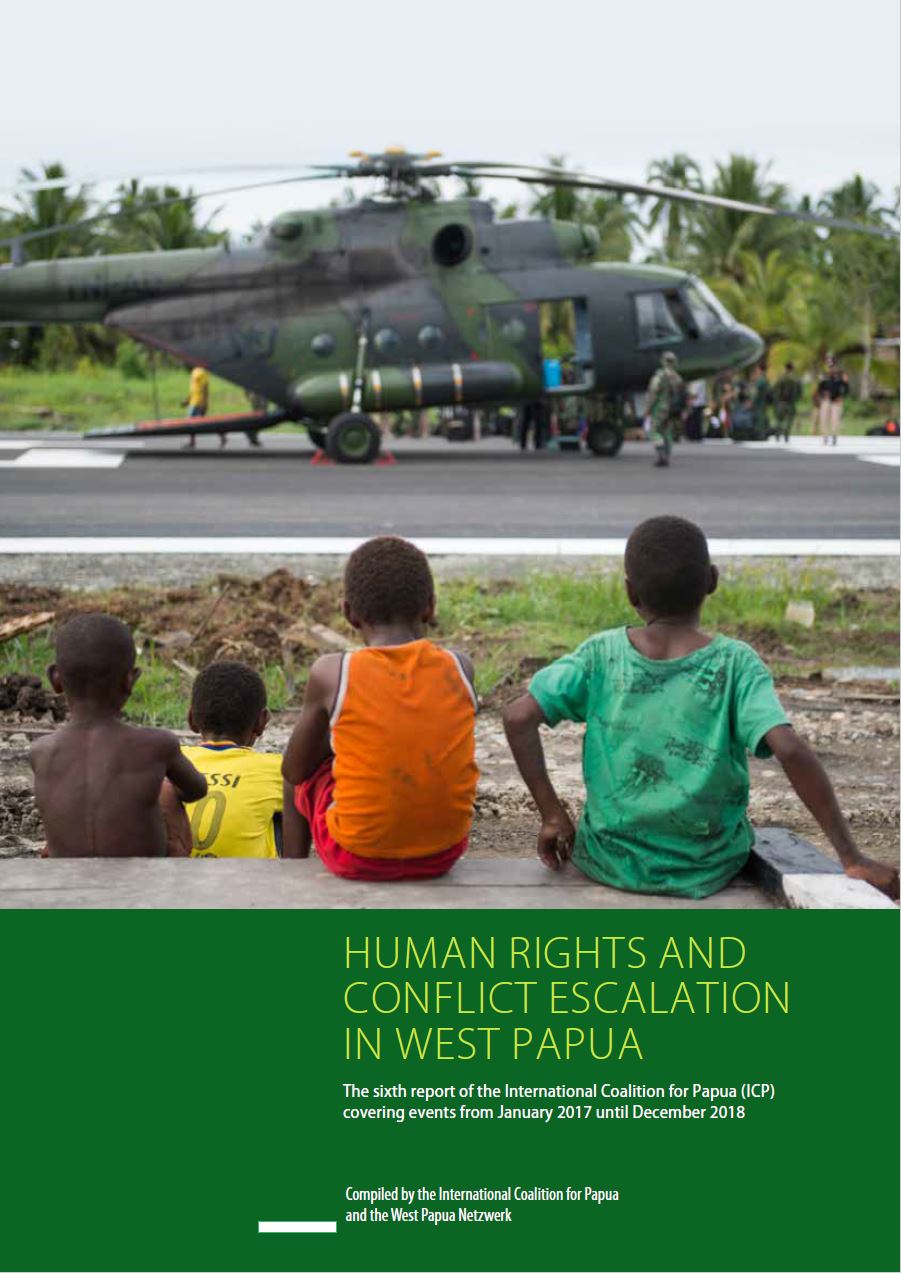 The central government in Jakarta allocates considerably large funds to the provincial governments of Papua and Papua Barat to improve infrastructure, health and education in West Papua. This monetary aid has not brought about meaningful change for the indigenous population of West Papua. There is a strong imbalance in the fulfilment of minimum health and education standards between the urban areas and the remote inland areas, where the majority of the local populations consist of indigenous Papuans. Acceptable health standards are only to be found in the cities of West Papua. In many remote areas, health facilities are dysfunctional due to the absence of health workers or lack of medicines. Multiple epidemic outbreaks in combination with malnutrition in remote areas of West Papua throughout 2017 and 2018 remained unrecognised for months due to the absence of functioning health care facilities. In many areas of West Papua, the conversion of forest into plantations has led to the destruction of staple food sources and hunting grounds, forcing indigenous households to develop a dependency on commercial food products like rice, instant noodles and bottled water. Similar to what is happening in the field of health, the quality of education in the remote areas of West Papua is much lower than in the large Papuan cities. The government has achieved some progress through the employment of more teachers and building new schools. However, persistent core problems in the education system such as teacher absenteeism as well as the low education and skill level of teachers in West Papua remain unaddressed.
Women and indigenous peoples are among the most vulnerable groups in West Papua. Papuan women often experience multiple patterns of violations in their lives among which domestic violence, state violence in relation to political conflict and discrimination are the most common forms. In addition, women still face social barriers in West Papuan society. The participation of women in politics is still less than half the quota of 30 % as set by the Indonesian government. It is still very rare for women to be promoted into leading positions in the local government. Throughout the reporting period, there is only one ministerial agency, namely the Agency for Social Affairs in the Province of Papua, which is led by an indigenous Papuan woman.
Indigenous peoples’ lives in West Papua are under threat due to the demographic shift through government-driven and spontaneous migration as well as land grabbing and deforestation in relation to large scale resource exploitation projects. The demographic shift in West Papua has also resulted in the marginalisation of indigenous Papuans and growing social tensions between Papuans and Non-Papuans. Deforestation, often in relation to the establishment of palm oil plantations, has a strong impact on the food security of indigenous communities. Recent studies have shown that various forms of illegal logging and timber trade are rampant in West Papua. Timber companies often use loopholes in the Government’s electronic timber monitoring system to process illegally logged timber.
President Joko Widodo (Jokowi) has pushed the development of infrastructure and the economy in West Papua. However, he failed to address long-standing structural shortcoming which continue to affect the human rights situation in West Papua. The House of Representatives planned to enact a new Criminal Code, which is due to come into effect in 2022. The new Criminal Code has failed to address the lack of clarity regarding treason and other provisions, which continue to be used in West Papua for the restriction of fundamental rights and freedoms. Similar to the criminal code, the national human rights system is in urgent need of reform with a view to increasing its effectiveness. Only a small percentage of human rights violations in West Papua result in the prosecution of perpetrators and the restitution of victims and their relatives. Legislative and executive bodies in West Papua continue to struggle with the inconsistent implementation of the Special Autonomy law, which enables them to enact special provincial bye-laws (‘Perdasus’) as well as regular provincial bye-laws (‘Perdasi). Jakarta uses procedural shortcomings to prevent bye-laws from coming into effect if they are contrary to the national interests. West Papua remains one of the military (Tentara Nasional Indonesia, TNI) strongholds in Indonesia and the TNI continues to engage in the protection of private businesses, the implementation of government development projects and law enforcement operations. The influence of the TNI has grown under President Jokowi, who has appointed several former high-ranking military generals as close advisors and ministers.
Statistics on the number of armed clashes or attacks illustrate that the armed conflict in West Papua has significantly increased over the past four years. Particularly alarming is the significant increase in the number of civilian fatalities, particularly in 2018. Religious confrontations between indigenous Papuans, mainly Christians, and migrants from other parts of Indonesia, mainly Muslims, throughout 2017 and 2018 indicate growing tensions between Papuans and Non-Papuans. In addition, the presence of a radical Islamic group poses a threat to religious diversity and inter-religious tolerance in West Papua. Despite growing horizontal tensions and an aggravation of the armed conflict, the Government failed to take meaningful steps towards a dialogue in the past several years. The human rights situation in West Papua has increasingly drawn the attention of international media outlets, inter-governmental bodies and the international community throughout 2017 and 2018. The UN High Commissioner for Human Rights has repeatedly addressed the human rights situation in West Papua in public statements and he visited Indonesia in February 2018.

Seven key recommendations addressed to the Government of Indonesia