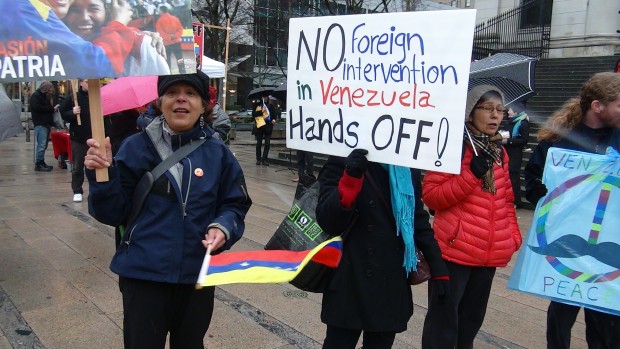 Human Rights Watch Gets The Facts Wrong On Venezuela, Again

Human Rights Watch Should Stick to the Facts on Venezuela

Despite the fact that the New York Times had to run a correction on February 26 for claiming that Globovisión in Venezuela was “[t]he only television station that regularly broadcast voices critical of the government,” Daniel Wilkinson of Human Rights Watch (HRW) repeats the same error in the New York Review of Books yesterday, writing that:

Two of the four private stations voluntarily dropped their critical coverage; a third was forced off the air; and the fourth was hounded by administrative sanctions and criminal charges until the owner sold it last year to investors reportedly linked to the governments, who have dramatically curtailed its critical content.

In fact, the stations he claims have “dropped their critical coverage,” Venevisión and Televen, regularly run coverage that is critical of the government, as documented here.

Since the claim that these stations have “dropped their critical coverage” is demonstrably false, the NYRB, like the New York Times, should run a correction.

The fourth station he refers to is Globovisión. During the run-up to last April’s presidential elections, according to a Carter Center study, Globovisión gave nine times as much coverage to opposition presidential candidate Henrique Capriles as to governing party candidate Nicolás Maduro. Readers who are familiar with right-wing TV in the United States will note that this would not be possible for Fox News, for example, to get away with. So, if Globovisión “dramatically curtailed” its anti-government bias – Wilkinson offers no data — because it was bought by someone who wanted to practice mainstream journalism, the station could still have a lot of room to trash the government.

In fact, on February 17, in the heat of the recent protests, Globovisión ran an interview with opposition leader María Corina Machado in which she denounced the government for a series of alleged crimes and argued that people had the right to overthrow it. This casts a bit of a shadow over Wilkinson’s further claim that “while some news programs have interviewed opposition leaders and government critics, they do so under the legal and political constraints imposed by the government.”

It’s too bad that Wilkinson ignored or perhaps didn’t read the Carter Center’s report on the Venezuelan media during the vigorously contested 2013 presidential election campaign. The data from the report, taking into account audience share, indicate that TV media coverage was pretty evenly split between the two candidates. This contradicts the exaggerated picture that he paints in this article of an “authoritarian” government seeking to “control how the news gets reported on Venezuelan TV.”

The 2,800-word article – which provides few links or sources to back up dozens of allegations – contains a number of exaggerations and inaccuracies. For example, in describing the protests he writes that “Most of these have been peaceful, though in many places protesters have barricaded streets, and some have thrown rocks and Molotov cocktails.” This contradicts daily news reports in the major international media. Some of the large daytime marches have been peaceful, but every night for nearly two months there have been violent protests where the participants throw rocks and Molotov cocktails at security forces and sometimes neighbors who try to clear or pass through barricades. Not to mention the occasional shootings by protesters. He doesn’t mention it, but half of the 39 fatalities he refers to have apparently been caused by protesters.

Now, don’t get me wrong. It is the job of human rights groups to denounce and expose all human rights abuses committed by governments (and non-state actors too), and I would not criticize a human rights organization for being too harsh on any government. And if Wilkinson wants to ignore or pretend he can’t see that this is another attempt to overthrow a democratically elected government taking place, that’s his prerogative too. But why the gross exaggerations and false statements? Aren’t there enough things to complain about without making things up?

HRW can get away with outrageous double standards if they want. They barely lifted a finger when a U.S.-backed coup overthrew the democratically-elected government of Haiti in 2004. The perpetrators of the coup killed thousands of people, and officials of the constitutional government were put in jail. This did not raise a tiny fraction of the concern at HRW as compared to the “independence of the judiciary” in Venezuela, which of course was not more independent before their enemy Chávez was elected.

In 2008, more than 100 scholars and experts signed a letter documenting and “highlighting exaggerations and inaccuracies” in a “politically motivated” report by HRW on Venezuela. It is clear that HRW did not take any steps to correct their bias or carelessness with the facts. That is a shame. Of course, there is no political price to pay in the U.S. for exaggerating or making false statements about a government that Washington wants to destabilize. But it does not serve the cause of human rights; and it undermines the good work that HRW does in other countries when they are seen as a partisan ally of a U.S.-backed attempt at “regime change.”

Really they should stick to the facts.