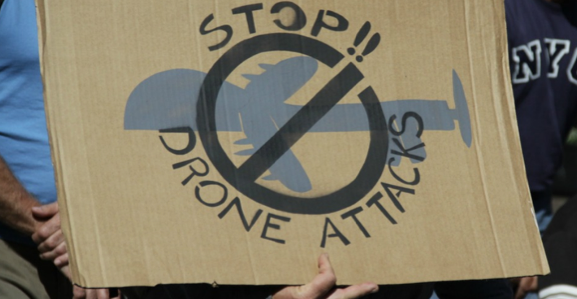 In an effort to defend Human Rights Watch against recent criticism that its cozy relationship with the U.S. government threatens its objectivity, Executive Director Kenneth Roth and Reed Brody, Counsel and Spokesperson, mistakenly thought HRW’s coverage of the Obama administration’s use of drones offers a defense against such charges.

On May 12, Roth received a letter written by Keane Bhatt and co-signed by multiple Nobel Peace Prize Laureates, a UN Special Rapporteur, and more than 100 scholars. In the letter it states, “Human Rights Watch characterizes itself as ‘one of the world’s leading independent organizations dedicated to defending and protecting human rights.’ However, HRW’s close ties to the U.S. government call into question its independence.”

In his response to the letter, Roth retorted, HRW routinely documents and denounces “human rights violations by the US government, including…abusive use of drones [emphasis added].” What exactly is “abusive use of drones”? Are double-taps nothing more than an abuse? What about targeting funeral attendees and the use of “signature strikes”? Every single one of the tactics just mentioned could amount to war crimes, exponentially more significant than “abusive,” and have been employed under President Obama.

If any other government in the world was doing what President Obama is doing, would HRW’s primary recommendation be greater transparency?

A double-tap involves launching an attack subsequent to the initial attack in order to kill those who converge on the scene of the initial attack. Thus, even if we accept that those who were killed in the initial attack were legitimate targets, the follow-up attacks have undoubtedly killed innocents, something documented by The Bureau of Investigative Journalism. Attacking funeral attendees is similar to the use of double-taps. Even if we accept that the person being mourned was justifiably targeted, attacking those who attend the funeral accepts that family members and friends are legitimate targets simply because of their relationship with the person being mourned.

Despite the overwhelming evidence that at minimum suggests the possibility that President Obama has authorized acts that constitute war crimes and failed to immediately end other criminal practices upon becoming aware of their use, such as targeting first respondents and funeral attendees, HRW’s primary call has been for President Obama to explain “the full legal basis on which the US carries out targeted killings.” This call was reiterated by Brody on June 11 while participating in a debate hosted by Democracy Now: “We have taken Obama, the Obama administration, to task for its failure to live up to the promises he made a year ago regarding transparency in the use of drones.”

If any other government in the world was doing what President Obama is doing, would HRW’s primary recommendation be greater transparency? Perhaps it would be in response to one or a few drone strikes, but certainly not upwards of 500 strikes resulting in thousands of deaths, including somewhere between 500 and 1000 civilians, over a period of more than five years (the first strike took place in 2002, but the vast majority have occurred since President Obama took office).

The call for greater transparency is even more laughable when considering the inevitable outcome of such. Are we to believe that HRW would call for the criminal prosecution of President Obama if his explanation of the legal justification for drone strikes was wanting? As long as the memos being kept secret by President Obama pay lip service to international law and do not say something like, “The indiscriminate killing and intentional targeting of inhabitants of any country deemed to be harboring members of al-Qaeda and associated forces is legal,” any greater transparency will be celebrated as “doing the right thing” and will no doubt “vindicate” the President against those who accuse him of war crimes.