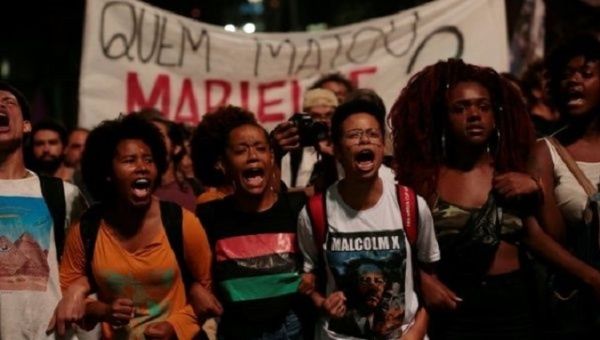 Above Photo: People take part in a rally against the murder of Brazilian councilwoman Marielle Franco, in Sao Paulo, Brazil March 15, 2018 | Photo: Reuters

The conference is aimed at building ties between activists to develop strategies for fighting repression and discrimination over the next two decades.

More than 150 rights campaigners from around the world gathered in Paris on Monday, warning of a spike in the number of activists from Brazil to the Philippines being murdered for their work.

Groups behind the Human Rights World Summit, including Amnesty International and the International Federation for Human Rights, said at least 312 activists were murdered in 2017. This represents a doubling in the murder rate since 2015, they said in a statement on the first of three days of meetings in Paris, bringing together activists from 105 countries.

“In nearly all cases those responsible have acted with total impunity,” the statement added.

Andrew Anderson, head of Front Line Defenders, a Dublin-based group which seeks to protect activists, said the numbers for 2018 were set to be “higher still.”

“In the countries where the largest number of human rights defenders are being killed — Mexico, Colombia, Brazil, the Philippines, Guatemala, Honduras — we can see that the numbers are already higher than they were last year,” he added. “The level of threat and risk that these courageous human rights defenders face is quite horrendous.”

Some of the activists met French President Emmanuel Macron later Monday at the Elysee Palace.

Attendees include Matthew Caruana Galizia, a Pulitzer Prize-winning reporter whose mother Daphne, a Maltese journalist and anti-corruption activist, was assassinated a year ago. Anielle Franco, whose sister Marielle — a Brazilian black rights activist murdered in March — was also taking part in the conference.