Above Photo: Protesters approach the embankment erected to protect the reclamation area for the base relocation project off the Henoko district of Nago, Okinawa Prefecture, on Aug. 17. (Jun Kaneko)

NAGO, Okinawa Prefecture–Okinawans rallied in their hundreds Aug. 17 to protest reclamation work for a new U.S. military base here. Scores drove home their point by boating in waters close to the project site.

The protest was held to mark the date the central government initially set for the next stage of construction off the Henoko district. The new facility featuring partly offshore runways will take over the functions of the U.S. Marine Corps Air Station Futenma in Ginowan, also in the prefecture.

The death earlier this month of Governor Takeshi Onaga, a symbol of the protest movement in Okinawa, prompted the central government to postpone the process. An election will be held Sept. 30 to fill the vacancy.

Onaga was stridently opposed to Futenma’s relocation within the prefecture. He died Aug. 8 of pancreatic cancer.

Demonstrators aboard 48 small water craft assembled in the vicinity of an embankment built to protect the planned reclamation area.

After offering a silent prayer for Onaga, they began chanting “We will not allow this offshore area to be filled in” and “Don’t kill coral reefs.”

They were joined in the afternoon by other activists who have been protesting in front of nearby Camp Schwab, a U.S. Marine Corps facility, in Henoko.

According to the organizer, some 450 people took part in the rally.

“I was enraged to see the waters off Henoko enclosed by the embankment,” said Kenichi Susuda, 70. He moved to Okinawa Prefecture about 10 years ago from Yokohama.

“We are determined to thwart the reclamation work and have authorities also breach the embankment for the sake of the living creatures trapped there,” he said.

The central government has decided to gauge the trend of the governor’s race before announcing when reclamation work will resume. 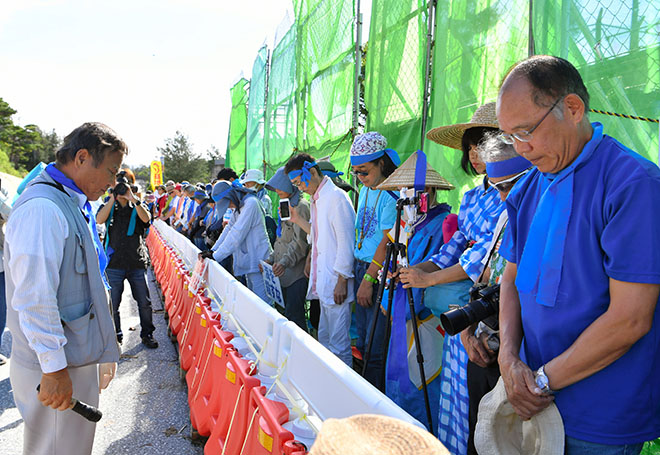 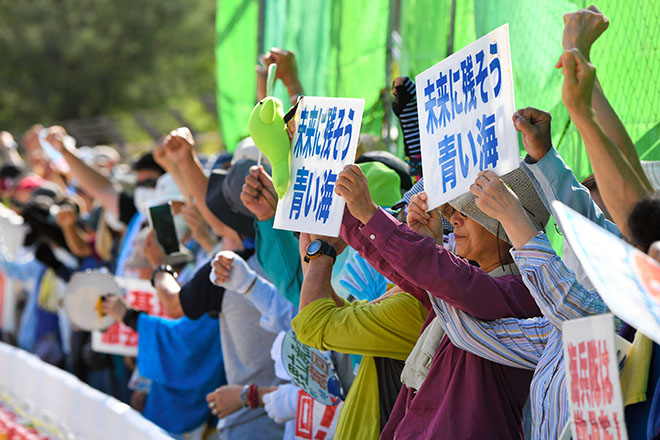