On the 14th of October, hundreds of people turned out for a march on the American Petroleum Institute (API) against the climate chaos they are lobbying for. The march also was in opposition to the TPP (Trans-Pacific Partnershop) a trade deal the oil industry had a strong role in shaping. With popular groups now doing everything possible to block ratification of the TPP, turnout for this protest mushroomed, with everyone from the SEIU to opponents of the PEPCPO/Exelon merger showing up.

The protest began with a march from Franklin Square to the L st offices of API. This march was on the sidewalk to gain the most direct approach to the space in front of API. There, public space set aside as API was taped off could not handle the number of people on hand and the rally spilled into the street. Had they wanted to, protesters could easily have taken both the taped-off space and the lobby of API’s building behind it. After a mock debate with API and industry supporters over the Paris climate summit and the TPP, activists staged a die-in. This was followed by another march, this time in the streets to Freedom Plaza.

A major concern of organizers was that the oil industry and others supporting the TPP will sabotage the upcoming Paris climate summit. With a climate summit coming and a dirty trade deal to stop, never has the choice of two different future been so stark in recent memory. Not only the numbers but also the artwork and strong street theatre of this protest had a lot of the flavor of medium size antiglobalization protests (not at summits themselves) from the circa 1999-2001 era. 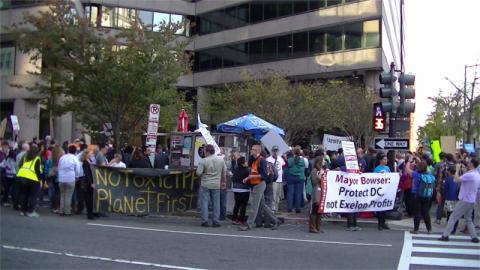 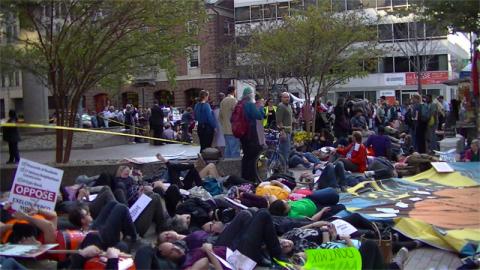 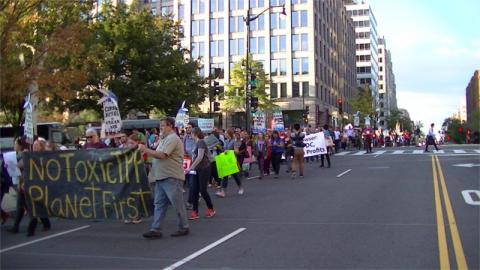 Marching down 13th st after the die-in 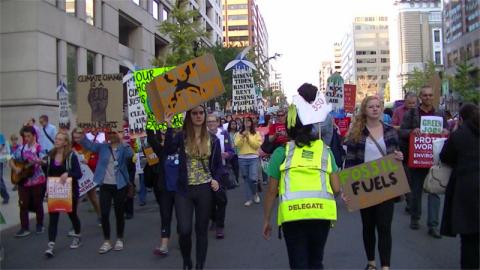 Artwork at the street march