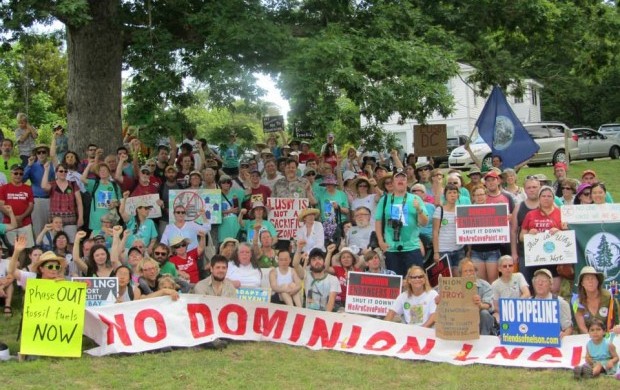 Southern Marylanders and allies celebrate community as they voice concerns over impacts Dominion’s industrial project would have on their well-being.

LUSBY, MD — Approximately 200 people participated today in what is believed to be the largest march Southern Maryland has ever seen, spanning six miles from Solomons Island to Lusby. They walked to show Dominion and government officials how much they value the health and safety of people in Southern Calvert County, who would be most impacted by Dominion’s liquefied natural gas (LNG) export terminal and refinery should the project be completed.

Marchers included residents who live on Cove Point Road in Lusby — near the main facility site and near the offshore pier, which would see dramatically increased tanker traffic — as well as people who would be affected by other fracked-gas projects in Pennsylvania, Virginia and other states where infrastructure is proposed to be built to feed the proposed export terminal at Cove Point. The march was organized by We Are Cove Point, Calvert Citizens for a Healthy Community, Beyond Extreme Energy, Sierra Club Southern Maryland Group, Chesapeake Climate Action Network, and Patuxent Friends Quaker Meeting.

Many participants at today’s event carried signs and banners expressing their desire to live free of fear of health impacts from dozens of tons of emissions the facility would spew into the air each year, or the risk of a catastrophic explosion that could impact the 8,045 people living within the 2.2 mile hazard zone set forth by the US Department of Energy. Nowhere else in the world has an LNG export terminal been built in such a densely populated area, and this crowd was determined to hold Calvert County to the same standard. So far, county government officials have largely supported the project, trading the health and safety of residents for extra tax money in a county with a notoriously unbalanced budget.

“What Dominion is doing in our community is simply wrong,” said Tracey Eno, a massage therapist-turned-activist from Cove Point. “The good people of Lusby should not be bullied and subjected to the inconveniences of mud, dust, noise, traffic, road closures, dangerous construction-vehicle drivers, and complete disregard from a Virginia-based company that is making a profit at our risk and expense. We are now seeing the tip of the iceberg. The real danger will come if the liquefaction process starts up. 410,000 gallons of highly pressurized and explosive liquid propane sitting next to 14.6 billion cubic feet of LNG is absolutely dangerous.”

Kevin Zeese, a lawyer from Baltimore who has been actively supporting Calvert residents concurred. “The people of Lusby and Cove Point are facing the destruction of their community at a time when the United States should be moving away from oil and gas and toward a new energy economy,” he said. “Housing values near Dominion Cove Point will plummet, health standards in the community will deteriorate, and the specter of a massive explosion will always be in the background.”

“I have been compelled to engage on this issue by a deep-seeded sense of injustice,” added Marcia Greenberg, an international pro-democracy worker living in St. Mary’s City. “This has not been a fair fight from the start: Dominion has had the experience, resources and connections to push ahead. A great wrong is being done to people who live near the Cove Point LNG facility — as well as to all who cherish the Chesapeake Bay. This march is not only about Dominion’s facility at Cove Point. It is a march for governance with integrity, for justice for local communities, and for determination to protect our environment.”

The route of today’s walk illustrated the path Dominion takes to bring its heavy equipment through our county, from its construction site in Solomons Island, where people used to gather to watch fireworks every Fourth of July, to its main terminal in Lusby, situated across the street from residents who are increasingly trying to move away.

This walk is a continuation of the efforts of people working to stop this project. Since 2012, people have been educating themselves on risks, speaking at public hearings and town halls, attending all levels of government meetings, writing letters, and even committing civil disobedience when politicians have chosen money over democracy.

More information on the work local people are doing to stop Dominion’s plans for LNG export at Cove Point can be found at www.wearecovepoint.org and www.calvertcitizens.org.