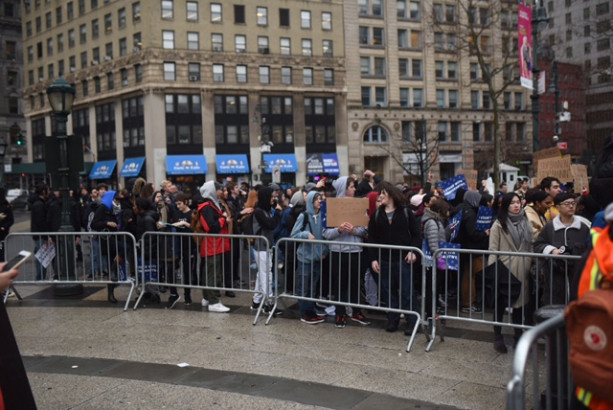 Several hundred NYC high school and college students walked out of class at noon on Tuesday and gathered in Manhattan’s Foley Square to protest President Donald Trump and his administration’s policy proposals on public and higher education as well as, more broadly, “bigotry, hatred, and prejudice.”

The walkout coincided with the Senate confirmation of Betsy DeVos, who became the first cabinet nominee in American history to be confirmed following a tie vote. Vice President Mike Pence broke the tie, according to CBS. DeVos has been derided by charter school and public school advocates alike, for her apparent lack of basic education policy knowledge and numerous conflicts of interest.

“Betsy DeVos was confirmed today despite her shameful inexperience and complete lack of understanding for the very job she seeks,” one student speaker shouted into the mic, to loud boos from the crowd.

Undeterred by the rain, students also mic-checked their support for Deferred Action for Childhood Arrivals (DACA), an Obama administration legacy that defers deportation for the children of undocumented immigrants.

“Even though there was a temporary halt on the Muslim ban,” organizers wrote in a Facebook event for the group, “we must remain vigilant. Focus on the next issue. Focus on the injustice that went unnoticed.”

Chants included “Hey hey, ho ho, Donald Trump has got to go!” and “Education, not deportation!” and “No registry! Fuck white supremacy! No ban!”

“This is a learning space. This is a classroom. This is a lesson in civic history,” said Public Advocate Letitia James, addressing the crowd. “Throughout history it’s always been young people who have stood in the face of intolerance and indifference to demand tolerance and demand love.”

You can watch the rally and march live here, both of which were reportedly organized by 17-year-old organizer Hebh Jamal with the New York Immigration Coalition, Arab American Association of New York, and MPower Change:

The march from Foley Square is set to end at the United States Citizenship and Immigration Services (USCIS) building at 26 Federal Plaza.