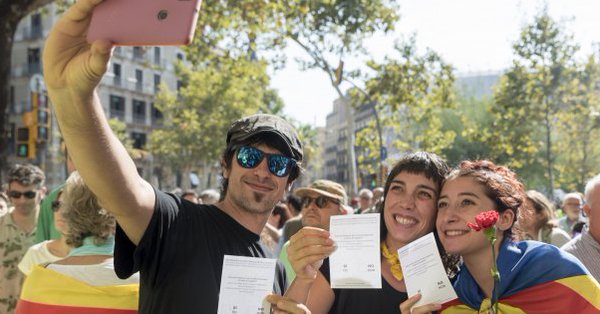 Hundreds Of Simultaneous Rallies In Catalonia “For Democracy”

Hundreds of town squares in Catalonia have been filled by crowds of people wanting to defend “democracy” this Sunday morning. The main pro-independence organizations in the country arranged demonstrations in hundreds of towns in order to stand up for the referendum. In some of them, protesters hung pro-referendum posters in a challenge to Spain, which has branded as illegal any act to promote the vote. In Barcelona some 1 million official ballots were distributed by rally organizers and students. This is yet an even bigger challenge, after the Spanish prosecutor has set its focus on the entities calling people to protest last Wednesday, after the raids of some 20 government buildings.

“The Spanish government are acting the same as the Franco dictatorship”

Some 100,000 ballots were distributed outside the main Barcelona University building and the rest given away in several squares of the Catalan capital. One of the highlights of the rally in Barcelona was the Catalan Parliament president’s unexpected visit. “The Spanish government talks about democracy, but they are acting the same as the Franco dictatorship,” she said to the crowd. “They think that by putting us away they’ll be done with our ideas, but democracy will always triumph,” she added.

Call to keep it peaceful

She also asked demonstrators to keep protests as peaceful as they have been until now. Pro-independence leaders have been insisting on this over the last few days, and the main rally organizers repeated the sentiment once more on Sunday. Although the Spanish prosecutor has filed a lawsuit against the protests and it has ordered investigations about the rallies this week, so far no major incidents have been reported.

Video: Supporters of the pro-independence movement light 82,000 candles making up a Catalan indy flag in Llívia:pic.twitter.com/lHZnwMPh7k