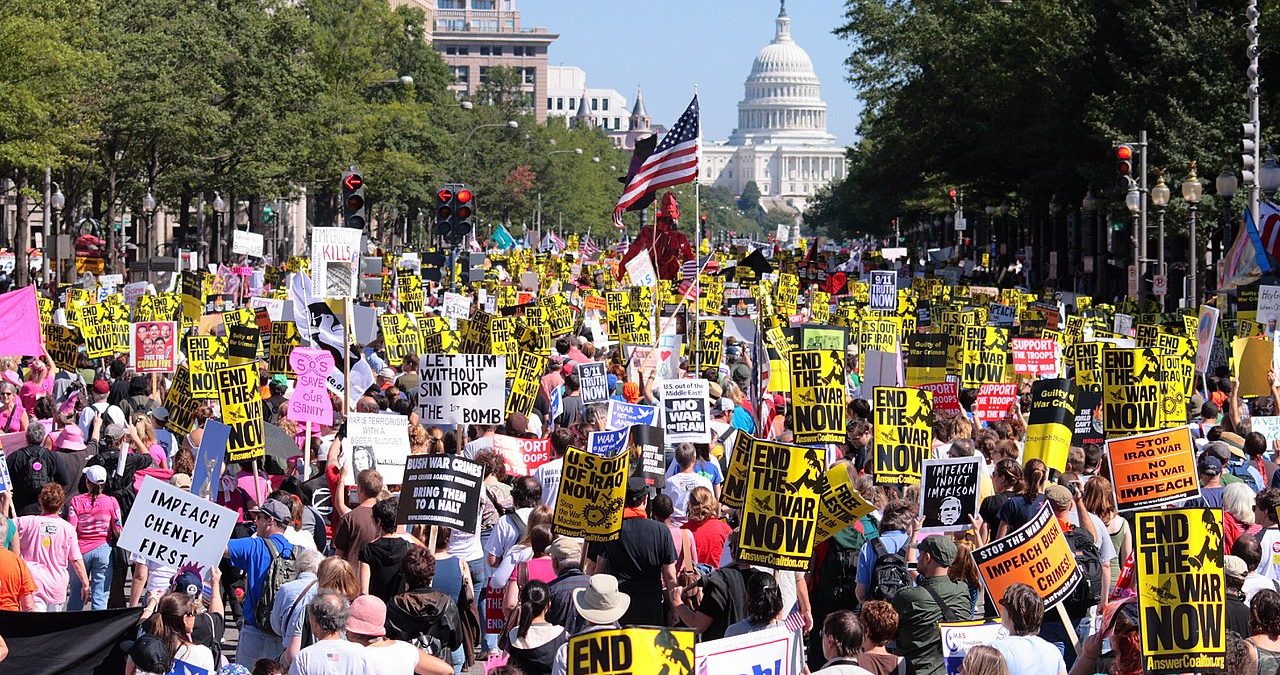 Above photo: From Wikimedia.

NOTE: Popular Resistance is one of the groups organizing this effort. The groups will have a shared website soon.

Peace and Justice Groups Say, “There will be more opponents than supporters if the military parade is held.”

US should expect protests at US embassies and other locations worldwide

Washington, DC – Leaders of major peace and anti-war organizations met on February 28, 2018 to collaborate on actions to bring hundreds of thousands of people to Washington, DC in November to protest President Trump’s military parade and celebrate the 100th anniversary of the armistice that ended World War I.

Participants at the meeting are united in opposition to the military parade because it glorifies war and militarism and wastes taxpayer dollars that could be used to fund people’s necessities and protection of the planet. All agreed to mobilize people to come to DC in November or to any location on any day if plans for the military parade change. There is a lot of enthusiasm to oppose Trump’s military parade. Peace advocates intend to outnumber parade supporters. In fact, a recent informal poll by Military Times of their readers, with 51,000 responses, found 89% opposition to the parade.

“Veterans, active duty GI’s and their families are paying a high price for these endless U.S. wars,” explained Gerry Condon, president of Veterans For Peace. “We are inviting our brothers and sisters, sons and daughters in the U.S. military to march with us in Washington, DC on November 11, Armistice Day.”

David Swanson, director of World Beyond War, declared, “We will turn out en masse to oppose and overwhelm this glorification of war, whenever and wherever it happens, and to replace it with a demonstration worthy of the 100th anniversary of Armistice Day, a celebration of what the world could be if we put an end to war for good. A hundred years of using war to end all war has failed miserably; it’s time we tried using peace to end all war.”

Brian Becker, national director of the ANSWER Coalition adds, “The War Parade is aimed at stimulating a new war drive that will bring death and destruction to one (or more) of the countries on the Pentagon hit list, potentially Iran, North Korea, or Venezuela. The over-the-top celebrations of the war machine — in the false guise of ‘patriotism’ — also serve to stifle dissent at home, as Trump has repeatedly shown with his racist attacks on #BlackLivesMatter protesters.”

“Trump’s new idea for a $22 million military march is a big, flashy way to normalize militarization. However, let’s not be fooled. We see more militarized police and soldiers in airports, train stations and bus stations. We see videos like this one of people on an Amtrak train being asked to produce ‘papers.’ That’s why it’s all the more important we oppose the normalization of militarism in our culture,” said Ajamu Baraka, national coordinator of Black Alliance for Peace.

“Since the 1990s, over $5 billion dollars-worth of military grade weapons and equipment have been transferred to local police forces,” said Medea Benjamin of CODEPINK. “In 2017, the United States spent $794 billion dollars on foreign and domestic militarism while over 40 million people in this country lived in poverty. We need a transformation of American priorities away from hyper-militarism, and toward serving and healing our people at home and spreading peace and justice in the world.”

Armistice Day was initially a day to remember the brutalities of WWI and celebrate peace, but in 1954 the US Congress changed it to Veterans Day and it has become a day to glorify war and the veterans who fought in them. Veteran’s groups are working together to reclaim Armistice Day. Trump’s military parade is out of touch with the millions of veterans and others who want an end to war and greater investment in human needs at home and abroad as well as protection of the planet at this time of climate change and extreme environmental degradation.

The organizers also intend to urge activists around the world to protest US militarism if the parade is held. US embassies and other locations should become a focal point of opposition to US hegemony. While this parade is intended to show off brutal US weapons to intimidate other countries, it is also an opportunity for the world to take action against US militarism and threats of war.