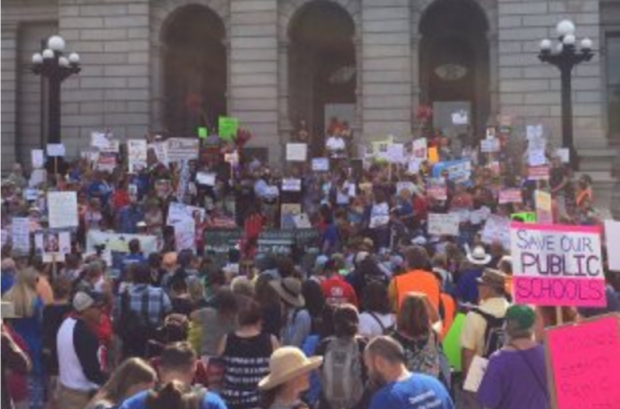 Hundreds Protest Betsy DeVos Ahead Of ALEC Speech In Denver

The ALEC meeting comes just a week after the education secretary’s talks with men’s rights activists.

Hundreds of protesters descended on the Colorado Statehouse on Wednesday, one day ahead of Education Secretary Betsy DeVos’ speech at the annual American Legislative Exchange Council meeting in Denver. The meeting comes just a week after the education secretary’s controversial talks on Title IX guidelines with so-called men’s rights activists and other skeptics of the federal law that has consistently protected victims of campus sexual assault.

“My primary concern is DeVos’ commitment to protecting sexual assault perpetrators and those accused of sexual assault,” University of Denver doctoral student Alicia Mountain told the Denver Post at the rally.

“My biggest fear is [DeVos] is going to destroy the public education system completely,” she said.

State Rep. Joe Salazar (D-Thornton) and state Sen. Andy Kerr (D-Jefferson County) both spoke at the statehouse rally before leading a march down Broadway. “Hey, ALEC, you can’t hide, we can see your greedy side,” the protesters chanted. The corporate-funded organization has long been criticized for working in tandem with huge corporations in an attempt to rewrite state laws. “ALEC’s secretive corporate lobbying flies in the face of how democracy is supposed to work,” explained Elena Nunez, executive director of Colorado Common Cause, in a statement. “Voters may not know who ALEC is, but they have been very influential in Colorado.”