Above Photo: Fast Day 4. Steve Baggarly and Kathy Kelly at the Kings Bay Sub base. 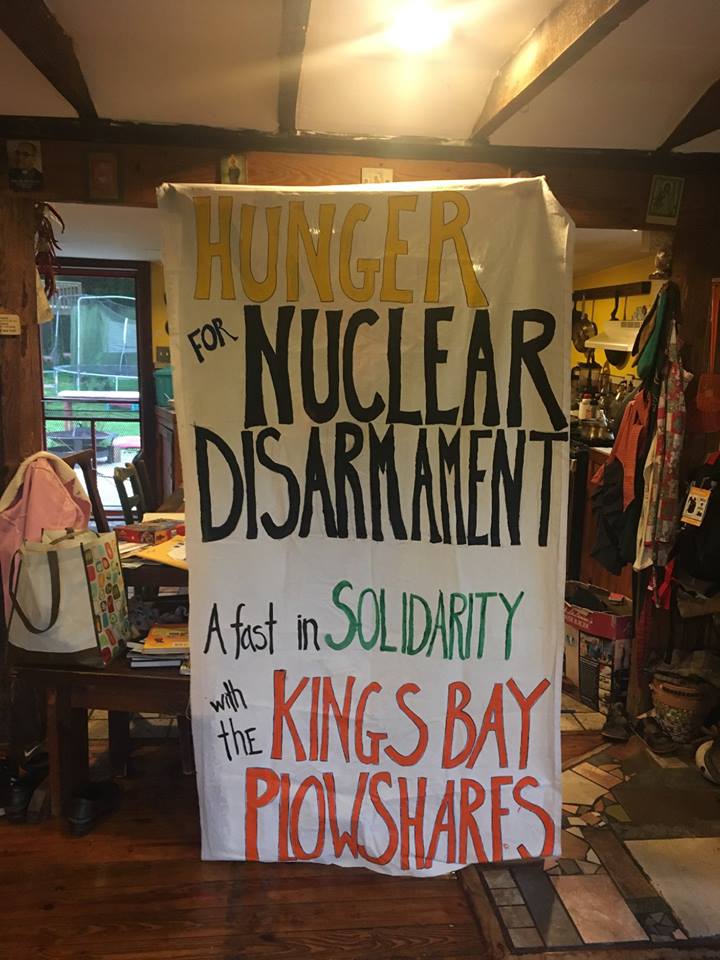 ST. MARYS, GA HAS A SECRET
When the Kings Bay Plowshares decided to smash idols and beat swords into Plowshares at the Kings Bay Naval base in St. Marys, GA, we assumed there would be lots of people in that community and surrounding towns and cities who were appalled to live in the shadow of the most insidious weapons system ever built by humans — Trident submarines armed with D-5 missiles.

To our surprise the folks in south Georgia and north Florida are actually filled with pride because this weapons system of mass destruction is part of the landscape where they live. They are essentially oblivious to the fact their economy and livelihoods are predicated on a promise to end life as we know it on planet earth. In fact, the Trident system includes enough explosive power to kill almost twice the earth’s population. And that’s just one of the Pentagon’s vast array of nuclear weapons systems.

It has been surprising to me that few locals share our view that planning the end of the world (that’s what Trident represents) is a bad idea. Perhaps that’s why it was a good idea for the seven of us Catholic Christians to come to this southern beach community to offer an alternate view of Trident and the threat it poses to humanity and all creation. My hope is our action might make people reflect on the insanity of Trident. 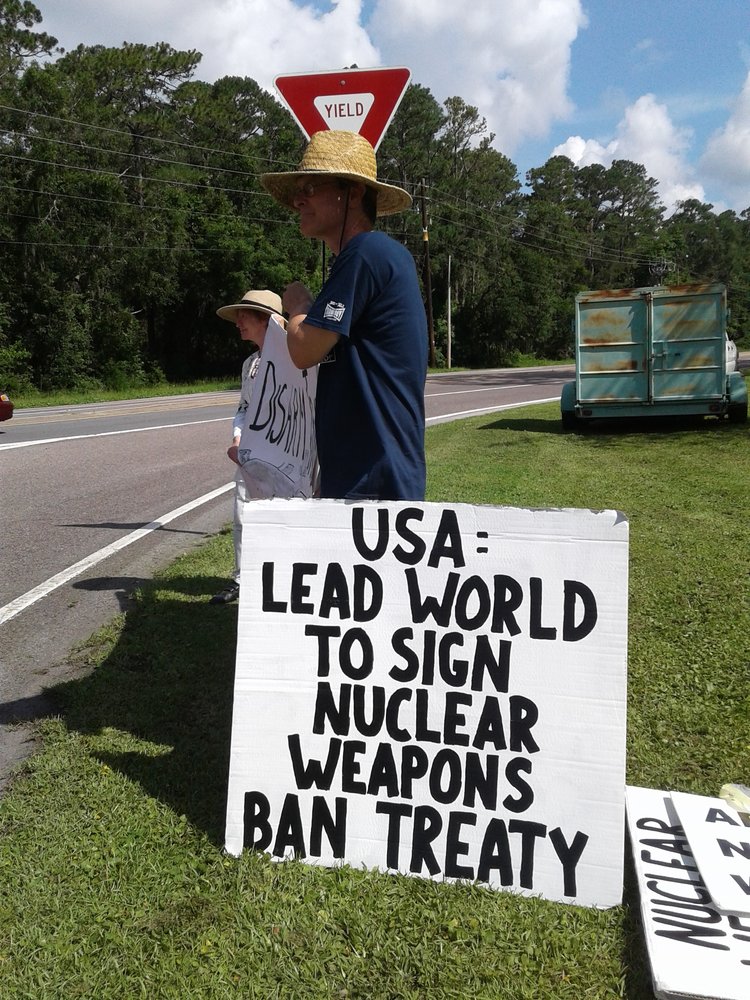 Today was the fifth and final day of our “Hunger for Nuclear Disarmament” fast. The six of us — Ken Jones of Asheville, NC; Kathy Kelly of Chicago; Beth Brockman of Durham, NC; Steve Baggarly of Norfolk, VA; Robert Randall who lives near the Trident base and me — have used our time together to pray, plan and build community for the work ahead. We are grateful for the hospitality provided by Terry and Chris Noyes and Fr. Bob Cushing, pastor of St. Joseph’s Catholic Church in Waycross. GA.  We are also grateful for the gracious hospitality and support of Celenda and Michael Perry of St Marys.

Each day here for the fast included a public witness, three times at the Kings Bay naval base, once at the Glynn County jail, where four of my co-defendants are still being incarcerated and once at the Brunswick federal building where our trial will be held. We also painted “Peace rocks” and hid them in St. Marys for people to find.

Because I am under “house arrest” I chose not to join the daily witnesses. I have done other means of support, and met with three of our team’s lawyers. 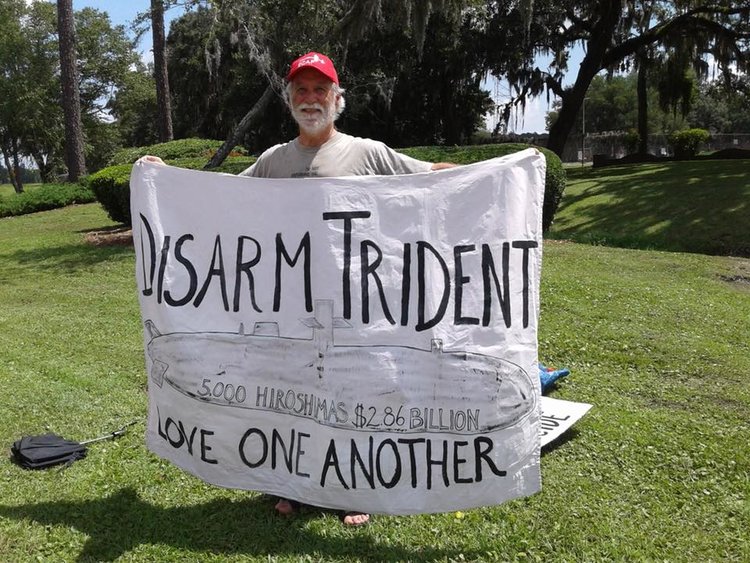 On Wednesday night we had a gathering of 14 of us led by lawyers, Bill Quigley, of the Loyola University Law School in New Orleans, and Jason Clark, a local Brunswick/Glynn County defense lawyer. We held a round-table discussion about our case at the Unitarian Universalists of Coastal Georgia fellowship, which gratefully hosted us.

Since I have entered into this Plowshares process as an expression of my faith and my belief in the Nonviolent Jesus, I try not to get too caught up in efficacy. I recall this quote from Mahatma Gandhi:
“Whatever you do will be insignificant, but it is very important that you do it.”

Our numbers may be few in this work to save the world from nuclear destruction, but our spirits are strong, our hearts are steadfast and love is our measure. Like all of you reading this reflection, I dream of a better, brighter, disarmed world in our future, a world where our children and grandchildren will not have to face the prospect of nuclear war. First we disarm our hearts and then we disarm our weapons, and finally, let’s disarm our world. 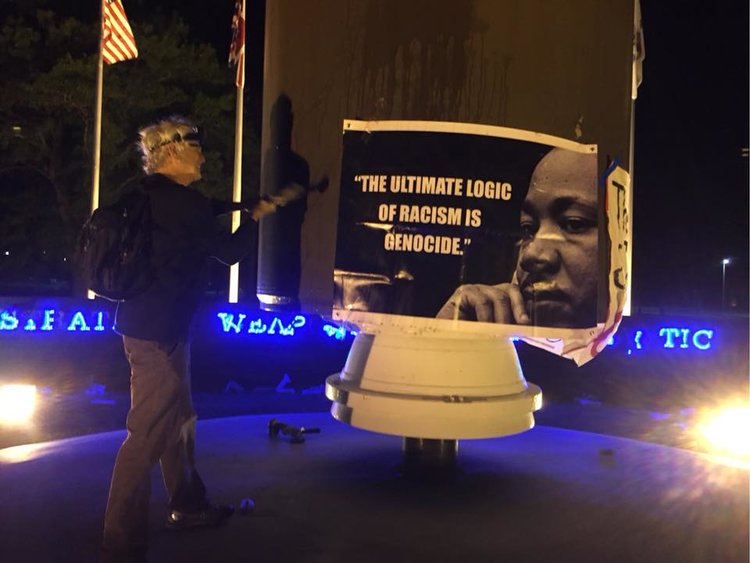