Above: Press conference and protest held in the hallway of the Maine state capitol on March 15, 2017. 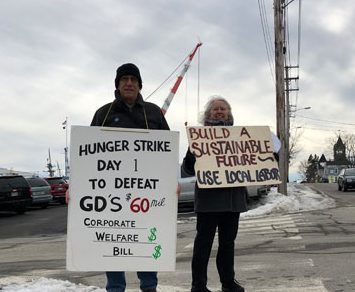 On Resistance Report, we interview Bruce Gagnon, who was on his 33rd day of a hunger strike against a massive tax give-way to one of the largest military contractors in the country. General Dynamics, which owns Bath Iron Works in Maine, is seeking massive corporate welfare from the state even though the company is highly profitable. The tax give-away was initially $60 million over 20 years, but it has been reduced to $45 million over 15 years. Gagnon and his allies in Maine are seeking for it to be reduced to zero. 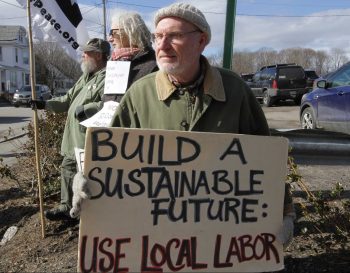 The company is highly profitable as the fourth largest military contractor in the United States. Since 2013, the year current CEO Phebe Novakovic, a former CIA agent, became head of the company, General Dynamics has spent nearly $11-billion on stock buybacks. Her salary is tied to the value of the stock, and stock buybacks increase the stock value of the company. This also results in bonuses to executives and profits for investors. During this time, the company has held back salaries and benefits of employees, resulting in the largest union at Bath Iron Works refusing to endorse the tax give-away. 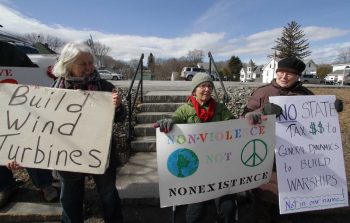 Gagnon is the coordinator for the Global Network Against Weapons and Nuclear Power in Space and a member of Veterans for Peace. He is on a hunger strike to protest Maine bill, LD1781, that would authorize the massive tax break. He grew up in a military family and became a peace activist after he served in the US Air Force during the Vietnam War. Gagnon is a long time opponent of the Bath Iron Works facility, which makes destroyers for the US military. He calls for conversion of the site to meet the needs of a clean energy economy, including mass transit in Maine and throughout the country. 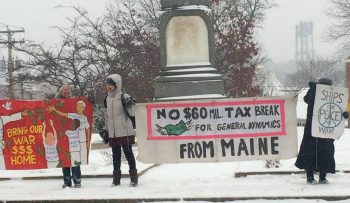 During the hunger strike Gagnon and eight others had criminal charges dismissed against them for a protest held at Bath Iron Works. One of the points made by the judge who that the local police had been outsourced and become employees for the corporation. Gagnon claims that not only have police been outsourced but so have the Times-Record, the local newspaper, and the Maine legislature. Alex Nunes, a reporter, was skeptical of Gagnon’s claims, but after investigating them, he wrote a column entitled Bruce Gagnon Is Right; Maine Has Been ‘Outsourced’ to Bath Iron Works. 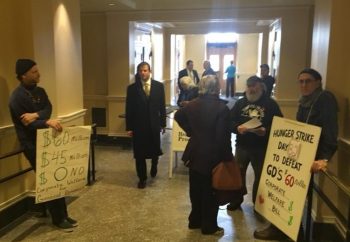 The Maine media has not covered the hunger strike, so please share this article and video widely so people in Maine will become aware of it. If you live in Maine, support Gagnon by calling your elected representatives. If you don’t live in Maine make a donation to their efforts.

Gagnon’s writing can be read at Organizing Notes.