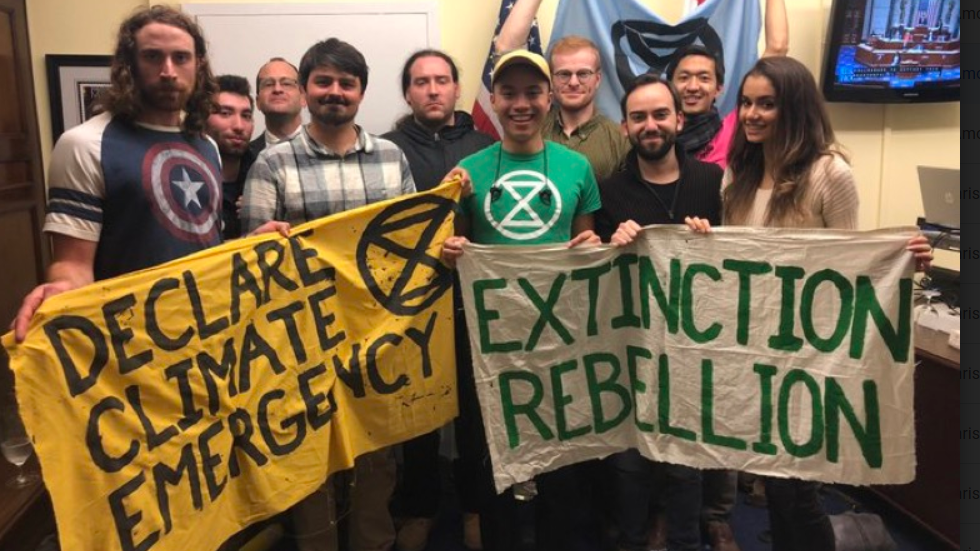 “Speaker Pelosi: Why are You Starving me?” Youth Hunger Strikers to Occupy Pelosi’s Office for Third Day

Hunger strikers with Extinction Rebellion will occupy Speaker of the House Nancy Pelosi’s office for the third day in a row today (November 20) as part of a Global Hunger Strike taking place in 27 countries on six continents. The hunger strikers are demanding the speaker meet with them on-camera for one hour to discuss the climate and ecological emergency that threatens the collapse of civilization. If Pelosi is supportive of climate action, why won’t she meet them? Is Pelosi too busy for the increasingly starving youth in her office?

Extinction Rebellion is taking this action because time has almost run out to address the ecological crisis, which includes the 6th mass species extinction, global pollution, and abrupt, runaway climate change. Scientists and other experts see the societal collapse and mass death as inevitable, with human extinction a possibility, unless rapid action is taken. Nancy Pelosi says she cares about the climate and ecological breakdown but her words ring hollow. She continues to ignore the science by blocking action on the crisis, including the climate emergency resolution and the Green New Deal.

Accepting climate science while refusing to take transformative action makes you no better than the deniers. “Speaker Pelosi: Why are you starving me? Why won’t you just speak to us?” asked hunger striker Nick Brana, visibly pained in her office.

The action is part of a Global Hunger Strike organized by Extinction Rebellion in 27 countries on all continents bar Antarctica, including the Democratic Republic of Congo, New Zealand, Pakistan, Turkey and the UK. More than 400 people are taking part in the biggest climate hunger strike in history.

This Is Not A Drill: An Extinction Rebellion Handbook