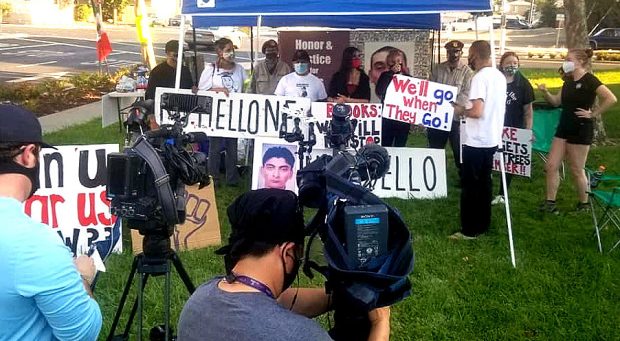 Above photo: Activists have launched a hunger strike to demand police reform in Antioch. The activists want Antioch police to fire Officer Michael Mellone, who was involved in the fatal shooting of a San Francisco homeless man in 2016 and to discipline Cpl. Steve Aiello for his social media posts that they say incited violence against protesters. Jessica de Guadalupe Aguallo-Hurtado.

Antioch — A handful of young activists have launched a hunger strike to demand local authorities fire a former San Francisco police officer who was one of two officers involved in the fatal shooting of a homeless immigrant.

Five local activists and one San Franciscan, who call themselves the #6Forced2Strike, began their strike Friday evening to protest, among other issues, Antioch Police Department’s retention of Officer Michael Mellone.

Mellone left San Francisco Police Department in 2019, resigning just before he was to be disciplined for events that escalated a confrontation that led to the fatal shooting of a homeless Mayan man, Luís Góngora-Pat, in 2016. The officer went to work shortly afterward for Antioch police.

“We’re out here making sure that our voices don’t go unheard,” Shagoofa Khan, one of the activists on the hunger strike, said. “We won’t stop until our demands are met.”

Another Antioch activist, Lacey Brown, said during a Saturday morning news conference that despite residents’ opposition to Mellone remaining on the police force, officials have not responded to their demands.

“I am out here because young people, activists and residents alike have demonstrated their opposition against Officer Mellone being here,” she said. “There have been marches, protests, there was an occupation of City Hall outside, and we don’t feel they have acknowledged our concerns whatsoever.

“We feel this escalation is necessary because our voices are not being heard,” she added.

Joining the local activists were members of the Brown Beret National Organization, who also called for police accountability.

“We are not just a bunch of losers who have nothing to do in life but to gather and protest,” Jessica de Guadalupe Aguallo-Hurtado of the Brown Beret said. “… We want that revolving door to stop of officers who are found to have been either behaving badly or have murdered but are able to be hired at other police departments and continue the same destruction and brutality and violence.”

Police Chief Tammany Brooks said in an email that he was aware of the hunger strike in front of the police department, however, he had no plans to fire Mellone, or any other officer, based solely on someone’s “demand.”

“The investigation into the documents released by SFPD after Officer Mellone was hired back at APD has not yet been completed,” he wrote. “With that said, there is no just cause to take action at this time and he is entitled to due process like everyone else.”

The activists, who have set tents up in front of the Antioch Police Department, have also demanded Cpl. Steve Aiello step down as president of the Antioch Police Officers Association after he commented that “an open-hand slap in the face is 100% justified” on a Facebook meme that showed a woman giving the middle finger to an officer during a protest somewhere.

The officer later apologized and said it was taken out of context. Brooks, however, has said he was “extremely disappointed.”

In an email late Saturday, Brooks said the investigation into Aiello’s social media post has been completed.

“There was a sustained violation of departmental policy and he was appropriately disciplined in this matter,” he said of Aiello.

The hunger strikers have also asked for a seat at the table during the upcoming “Bridging the Gap” community workshops on policing issues and potential reforms. In early July the council agreed to hire a third-party moderator to lead those discussions, but no workshop dates have yet been set.

On early Saturday afternoon, police were patrolling the area but no one spoke as the activists milled about and some wrote in chalk the names of victims of police violence and more on the sidewalk.

“We are tired of the no accountability with the police department,” Khan said. “We’re here, we are not leaving — we are going to be here as long as possible until our demands are met.”