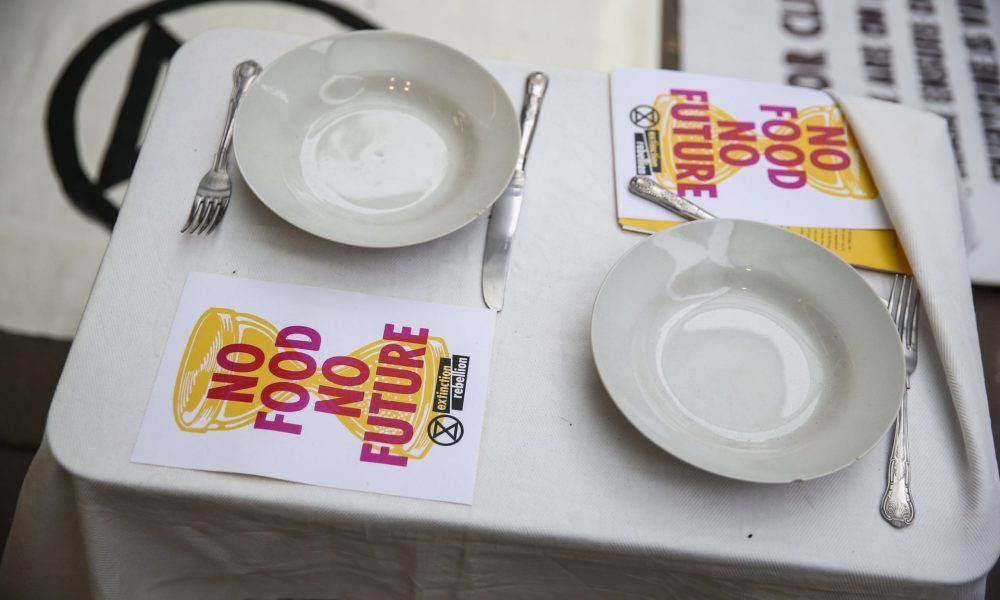 Youth Hunger Strikers will Miss Thanksgiving While Pelosi Jets off to Holiday Feasts.

November 27, 2019, Washington DC/Baltimore – Two hunger strikers with Extinction Rebellion have entered day 10 of their hunger strike, vowing to continue until House Speaker Nancy Pelosi meets with youth climate activists for one hour on camera to discuss the climate and ecological crisis that threatens the collapse of civilization.

Pelosi has yet to commit to a meeting meaning that they will miss Thanksgiving with their families while she jets off to California for holiday feasts.

On his release from jail, Tien vowed on video to continue his hunger strike until Pelosi meets with them. Tien said: “I talked to my parents yesterday and they asked me to stop. My mom said she couldn’t sleep. She was crying. But I feel like I can’t. Stopping now would betray billions of people all around the world who are already suffering. They have no way to protest the US government. So how can I stop? I must continue as long as I can for everybody’s sake. To give up now would be to betray my beautiful nephews and nieces who will have to scramble for their survival … either we fight now or we lose everything.”  See Tien’s article in The Guardian describing his hunger strike “My hunger strike could be deadly. But I am willing to risk that for climate action.”

Another hunger striker, Stephen Leas, 28, from Montgomery County, MD, is also entering day 10 of his hunger strike and was also arrested in Pelosi’s office with Tien. Leas has lost 18 lbs since he stopped eating.

Leas and Tien visited Pelosi’s office on November 25 to inform her staff that they plan to continue their hunger strike until the Speaker meets with them and youth climate activists.

Leas said outside Pelosi’s office in DC on November 25th: “I am hunger striking because the climate crisis is an emergency. The fires, floods, hurricanes, and food scarcity that will come from this crisis are a direct threat to my future, my family’s future, and my generation’s future. Nancy Pelosi claims to understand the magnitude of the crisis but refuses to act at the scale necessary. If she really cared she would meet with us. She would declare a climate emergency, end fossil fuel subsidies, and ensure a just transition overseen by the people.”

Leas’ mother, Claudia Leas, said: “Speaker Pelosi, I am asking you to meet with them for one hour and to declare a climate emergency. As a representative of California, you know how serious the climate crisis is. As a mother and grandmother who will be sitting down with your family this Thanksgiving, I would also like my son to be at my table eating. So happy Thanksgiving and please please meet with them.”

Eric’s father, Allen Tien, 65, said: “Speaker Pelosi … I and my wife would be extremely grateful if you could meet with Eric so that he could end his fast and then join his family for Thanksgiving on Thursday.”

On Thanksgiving Day, Extinction Rebellion San Francisco and Codepink Women for Peace will join the hunger strike and stage a mass die-in and “red hands procession” in front of Pelosi’s mansion in ritzy Pacific Heights, SF from 10am to 3pm. The hunger strikers, who stand in solidarity with DC’s hunger strikers, will also deliver to Pelosi’s door another copy of XR DC’s letter asking Pelosi for a meeting.

“As constituents of Speaker Pelosi and concerned citizens, we are asking her to lead action to prevent climate catastrophe, and to meet with Extinction Rebellion DC,” noted XR SFBay organizer Alycee Lane. “We could not stay home and enjoy Thanksgiving while our brothers and sisters in D.C. are making this poignant statement for the planet. We invite anyone concerned about the current climate emergency to join us at these actions.”

Pelosi has refused to directly acknowledge or respond to the hunger strikers since they began their fast. The Speaker claims she cares about the climate and ecological breakdown but has failed to use her influence to bring the climate emergency resolution to the floor of the house (H. Con. Res. 52 – Expressing the sense of Congress that there is a climate emergency which demands a massive-scale mobilization to halt, reverse, and address its consequences and causes). The Democratic House of Representatives won’t even pass a nonbinding resolution that tells the truth about the climate emergency. How can our government take the transformative actions demanded by the science when it won’t even acknowledge the crisis?

The global hunger strike has worked in many parts of the world. Sweden’s Minister of the Environment agreed to meet with Swedish hunger strikers. In the UK, politicians from a range of parties including the Labour Party and Liberal Democrats met with hunger strikers on camera. In the Netherlands, hunger strikers sat down with officials from the municipality of Wageningen for a recorded meeting to push for tougher action on the climate and ecological crisis. The city of Miami, Florida agreed to one of Extinction Rebellion’s key demands last week when it declared a climate emergency following a three-day hunger strike by an XR climate rebel.

This month, more than 11,000 scientists declared that the world’s people will face “untold suffering due to the climate crisis” without major transformations to global society. “We declare clearly and unequivocally that planet Earth is facing a climate emergency,” they state. “The climate crisis has arrived and is accelerating faster than most scientists expected. It is more severe than anticipated, threatening natural ecosystems and the fate of humanity… Especially worrisome are potential irreversible climate tipping points. These climate chain reactions could cause significant disruptions to ecosystems, society, and economies, potentially making large areas of Earth uninhabitable.” More than 1,500 scientists also joined a call for mass civil disobedience in the face of government inaction.

For photographs and video from the Global Hunger Strike, please click here