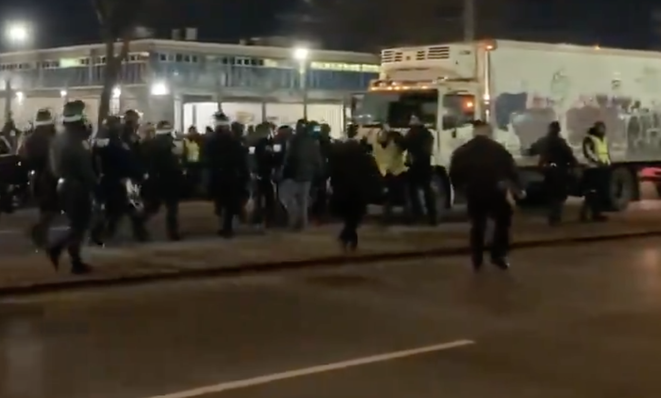 Above photo: NYPD officers approach workers with the Hunts Point Cooperative Market to take them off the street on January 19th. Teamsters Local 2020.

“The locomotive engineer said, ‘we’re @Teamsters too,’ turned the freight car around, and headed back to Ohio.”

Bronx, New York – Essential workers who distribute 60% of the city’s fruits and vegetables to supermarkets and restaurants have entered day three of a work strike—the first in 35 years–at Hunts Point Produce Market in the Bronx, where NYPD officers were dispatched to break up a picket line on Monday night.

If workers and company representatives do not arrive at a speedy agreement, New Yorkers could see a significant decrease in the amount of produce that lands at grocery stores and supermarkets by the end of this week, a union spokesman warned.

1,400 workers walked off the job at the Hunts Point Produce Market—part of the world’s largest food terminal—on January 17th, the result of a wage dispute. Videos from Monday night show dozens of police officers, some wearing riot gear, converging on a picket line where some striking workers were standing in the path of a truck driver outside the massive complex.

“Hands up don’t shoot!” We condemn the arrests of several peaceful strikers on the @Teamsters picket line tonight at Hunts Point Market. These essential workers deserve their $1 raise pic.twitter.com/PZhdvUe20v

An NYPD spokesperson said six people were arrested for obstructing traffic, released and given summonses.

“We will stay on strike until these employers pay their workers the essential wage they deserve,” Daniel Kane Jr., president of the workers’ union Teamster Local 202, said.

After their three-year contract expired this month, the union representing the market’s drivers and warehouse workers began negotiating with company leaders for a $1 raise and greater health care coverage for another three-year contract, citing high demand placed on them throughout the pandemic. Some members have lost their lives while during the pandemic, while others became sick from COVID-19, Charles Machadio, a union trustee, told Gothamist/WNYC.

Union members working at the Hunts Point Produce Market make between $18 and $21, depending on their job duties inside the mammoth industrial site, which operates 24/7 on city property and is open to the public. The yearly base salary works out to be between $40,000 and $45,000 without any overtime pay.

Owners of the 54-year-old market returned with a counter-offer: a 32-cent hourly wage boost and 60 cents earmarked toward their health coverage. The produce market often pulls more than $2 billion in yearly revenue, according to the New York City Economic Development Corporation.

“We’re working in a pandemic, now risking our life, every day, and you want to give us let less than what you gave us the last time in a normal situation?” Machadio said. “We’re not being unreasonable… They really deserve $4 an hour [more].”

“I think they’re using the pandemic to try and get out of the contract,” Machadio said. “Their businesses have been shut down not one day, nothing has happened. And they’re telling me about the uncertainty of their business. We all live in an uncertain world. I mean […] I could be dead next week. Every day is uncertain, right? So you know, don’t tell me about the uncertainty that doesn’t happen yet. Give them a decent raise, pay their healthcare, and we settle this. End the story.”

With every day that members are not working, produce will become scarcer, according to the union. For now, supervisors have managed to pick up the load to haul out 300,000 pounds of produce daily, destined for grocery stores, restaurants, and supermarkets.

“Last night the market got shut down for two hours […] and it’s not getting out,” Machadio said of the produce. “They may think this is unskilled work, but it’s not. You have to have trained hi-lo operators racking things three and four high; that’s not easy to do if you don’t know what you’re doing, okay? You got to know how to maneuver a jack so that the strawberries aren’t all over the floor.”

A spokesperson for the Hunts Point Produce Market said the market will remain open for business.

“Our top priority is maintaining the flow of fresh produce to our region,” the statement reads. “Even with the continued uncertainty surrounding the pandemic, we are offering our dedicated workers wage and benefit increases over the next three years that are a multiple of the current annual cost of living.  Under our offer we will continue to pay approximately $10K per employee/year for pension benefits, and $15K per employee per year for healthcare benefits in addition to base wage increases.  Unfortunately, the union walked away from the bargaining table 12 days ago and since then has focused only on bringing its members out on strike, which is harmful to the members and the community.”

The story has been updated with an emailed statement from the company and greater clarity on the company’s counter-offer.