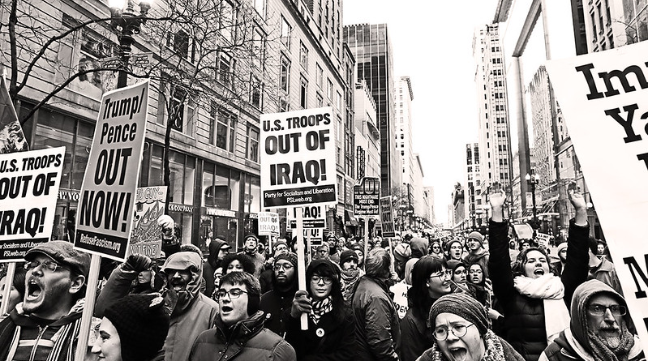 Hybrid Wars: What Is New And What Is Not? An Update About Iran

Above Photo: From Heartlandradical.blogspot.com
On The Law of Hybrid Wars

Andrew Korybko, a Russian scholar/journalist, has written about a new concept, “hybrid wars,” with a long history in practice. The author refers to the Law of Hybrid War as “The grand objective behind every Hybrid War is to disrupt multipolar transnational connective projects through externally provoked identity conflicts (ethnic, religious, regional, political etc.) within a targeted transit state” (Andrew Korybko, “Hybrid Wars 1. The Law of Hybrid Warfare,” Oriental Review.org, 4/3.2016). His  concern was United States targeted efforts to undermine efforts by Russia to integrate with Eurasian states and the US desire to disrupt China’s “silk road” projects. It is clear that the concept refers also to efforts by imperial states, particularly the United States, to undermine any efforts by other countries to develop political and economic solidarity that might threaten regional or global hegemony. And Korybko added that ”Hybrid Wars are externally provoked asymmetrical conflicts predicated on sabotaging concrete geo-economic interests.”

The tactics of Hybrid War prioritize identifying strategic weaknesses in target states. These do not necessarily prioritize targeting roads, bridges, or power plants for destruction but rather economic, political, ethnic, or other vulnerabilities. Vulnerabilities may include ethnicity, religion, history, administrative boundaries, and socio-economic disparities. Using “soft power” the imperial state supports the introduction of seemingly neutral technologies or processes, such as the internet in the target country. New intrusions are supported by some Non-Governmental Organizations (NGOs) such as the Soros Foundation or the National Endowment for Democracy. NGOs claim to be motivated to facilitate political and economic development. As David Harvey has suggested NGO projects come with a frame of reference, a goal, and/or a conception of desirable economic or political paths the host country should take. From the Hybrid War perspective these intrusions are used to exacerbate the class, ethnic, and/or geopolitical tensions in the target state.

Most important for analysis is the argument raised by Korybko that a critical precondition for imposing hybrid war (and a critical tool of it) is the pressure brought by “globally recognized” sanctions. Early in the process of imperial intrusion, victimized states experience increased costs for importing critical commodities, food, energy etc., constraints imposed on exports, and denial of loan requests from international financial institutions. As political instability increases, targeted states are forced to spend more on security, thus sucking resources away from domestic needs. Thus, the Law of Hybrid War involves an imperial state deciding that transnational projects constitute a threat to its rule and assessing historic vulnerabilities of targeted states. Then the imperialists institute policies of intrusion on target states through technology, expansion of an NGO presence, and organizing a global sanctions regime against the targeted state. From a Hybrid War perspective, the imperial power hopes for such an exacerbation of tensions so that regime change will occur without the introduction of foreign troops.

Iran has been a country of particular concern of the United States at least since the end of World War II. The US propped up the Shah (Mohammad Reza Pahlavi) at the outset of the war to protect US bases which were used to transfer war materials to the former Soviet Union. After Prime Minister Mohammed Mossadegh, elected in 1951, nationalized Iran’s valuable oil resource, Great Britain, whose Anglo-Iranian Oil Company had “owned “ the oil, began to urge the US to overthrow the democratically elected Prime Minister, instill full power in the monarch, the Shah, and reprivatize Iranian oil. In 1953 the US Central Intelligence Agency launched a coup to overthrow the Prime Minister and to establish the Shah as Iran’s all-powerful dictator. His brutality and repression lasted for years until a mass-based worker and religious-led movement ousted him from power in 1979. In the aftermath of the ouster of the Shah, religious leaders consolidated their control of the state, the Shah fled to the United States for medical treatment, the new regime demanded his return to stand trial for his crimes, and Iranian students took 52 US embassy personnel hostage for 444 days.

The United States responses to the transformation of the Iranian regime included President Carter’s declaration of his “doctrine,” which proclaimed that instabilities in the Persian Gulf region were vital to US national security. The US began to fund Iraq in its eight-year bloody war against Iran, which led to 500,000 Iranians killed. The United States urged Israel to invade Lebanon, escalate attacks on Palestine, and in general tilted in opposition to Iran and its allies in the region. The US also increased the sale of technologically sophisticated arms to Saudi Arabia. Therefore in the 1980s, US policy in the Persian Gulf and Middle East regions was driven by the growing hostility of Iran to the United States (once a pillar of US support in the Persian Gulf), the continued need of Europe and Japan for Iranian oil, and Iran’s vital geographic location, particularly in terms of its potential control of the  flow of oil to Europe and Japan.  But, in addition, the Iranian people had violated a cardinal rule of US global hegemony. They had risen up against rule by an American puppet. Much like Cuba in the Western Hemisphere, Iranians declared that they no longer would abide by a leader chosen by the United States and not them. (In fact, in the Nixon Administration, the Shah’s regime was identified as the key “gendarme” state in the Persian Gulf, the local US police enforcer).

Ever since the hostage crisis of 1979, the United States has imposed economic sanctions of one sort or another on Iran. After the long years of damage to the Iranian economy and the people at large, the  Nuclear Treaty of 2015 (the Joint Comprehensive Plan of Action), was negotiated by Iran, the United States, member countries of the European Union, and Security Council members, Russia and China.  Along with Iran’s promise to stop the production of potential nuclear material, signatories agreed to end the freezing of Iranian assets deposited in US and European banks, to eliminate various prohibitions on Western investment in the Iranian economy, and to remove trade restrictions.

Iran’s oil exports and hence production was hit particularly hard. The value of Iranian currency declined dramatically and inflation in the country rose, particularly for the price of food. (BBC News. “Six Charts That Show How Hard US Sanctions Have Hit Iran,” December 2, 2019). Sanctions reduced purchasing power, increased the cost of living for food and transportation, reduced access of Iranian students studying abroad to financial resources, and led to the reduction of public services.

This is the story of hybrid war against Iran: along with military threats and attempts to isolate Iran diplomatically, make the people suffer and cause increased outrage at the material conditions of life. The hope is that the people will rise up and overthrow the regime in power (and, of course, instances of corruption and repression will magnify protest responses). The scenario has been repeated over and over: Guatemala and Iran in the early 1950s, Cuba since 1960, and  now Venezuela and Iran again. And make no mistake about it: economic sanctions are targeted against civilian populations and constitute a strategy of war against the people, motivating them to rise up against their governments.

Meanings of the Hybrid War Concept for the Peace Movement

We can deduce a variety of conclusions from the Law of Hybrid Wars.

First, twenty-first century imperialism is not solely or primarily about direct military confrontation such as wars and/or covert acts of terrorism against targeted nations.

Second, hegemonic powers, such as the United States, see coalitions of states as a threat to global dominance. This is true in Eurasia, the countries along the Silk Road, and in Latin America where a crippled Bolivarian Revolution survives.

Third, policymakers do not primarily act impulsively. They see a threat, which includes transnational cooperation and resistance. Strategists then identify weak links in threatened coalitions. They formulate multi-dimensional, stage-by-stage responses. And these responses involve economics, culture, sowing seeds of division, promoting demonic narratives about target states, and at the same time they leave “all options on the table,” which means traditional military action.

Finally, it behooves the peace movement to be cognizant of twenty-first century methods of imperialism. It must fashion strategies that clearly and compellingly identify and combat economic sanctions recognizing that they, indeed, are acts of war.