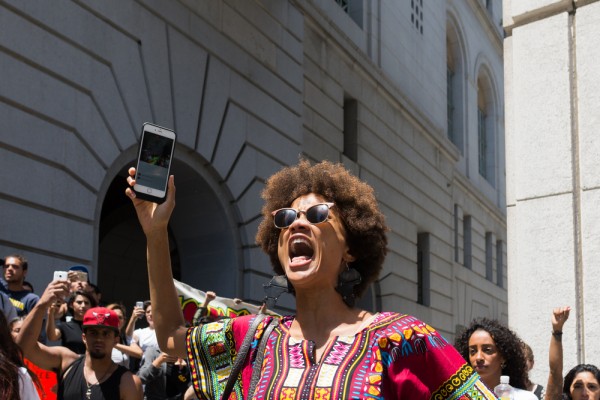 I Can’t Watch Another Police Killing

Shocking videos will come and go, but systemic police violence will continue regardless of whether we’re watching.

Philando Castile and Alton Sterling became the latest black Americans to turn into Twitter hashtags when videos of their deaths at the hands of police circulated on social media.

But I couldn’t bring myself to watch them.

I still remember the helpless frustration I felt, my stomach twisting in knots, as I watched the video of Eric Garner being choked to death while screaming “I can’t breathe.” Over and over again, I subjected myself to the emotional and psychological trauma of watching someone who could have easily been me being murdered.

Afterward, I decided that it’s not worth my wellbeing to ever watch another video like that. That’s meant taking long breaks from social media and TV news.

But it’s not like I can’t see what’s going on.

In my 23 years as a New Yorker, liberal and conservative mayors alike — from Rudy Giuliani to Bill de Blasio — have aggressively targeted struggling black and Latino communities in the city with policing.

Coupled with the war on drugs that the U.S. has been waging on poor communities of color for decades, that means poor black people are more likely to have encounters with the police. And we’ve all seen how those encounters can end.

Similar patterns play out all over the country. Despite a news cycle driven by the latest videos of black people dying at the hands of police — with individual circumstances endlessly debated each time — it’s beyond clear that the men and women who are killed aren’t just unlucky people in isolated encounters.

Instead, as Supreme Court Justice Sonya Sotomayer writes, “They are the canaries in the coal mine whose deaths, civil and literal, warn us that no one can breathe in this atmosphere.”

There’s ample data to support that the United States has a big problem with police violence and racially biased policing. According to The Guardian, nearly 600 people have been killed by the police so far this year. And young black men are 9 times likelier than other Americans to die at the hands of cops.

Shocking videos will come and go. But this violence will be present regardless of whether we’re watching. The problem is systemic, and demands a systemic solution.

That means analyzing federal, state, and local laws that drive patterns in police behavior and leave no room for accountability. This can give us specific things to rally around for change.

For example, special prosecutors, not secretive grand juries, should prosecute all police officers accused of unjustified shootings. And every department should have civilian review boards empowered to conduct independent investigations and provide oversight.

Congress should strengthen existing laws against systemic police misconduct by lowering the legal threshold for bringing civil rights lawsuits against police departments, and allowing private citizens and organizations to bring pattern-or-practice lawsuits, not just the Department of Justice.

Additionally, when departments are found to have violated people’s civil rights, instead of simply entering an agreement to reform, these departments should have their federal funding immediately suspended. And cases of abuse should be brought to trial in a federal court.

Moreover, all officers should get racial bias training, and training that emphasizes de-escalating tense situations.

Thinking systemically also means supporting community organizers and protesters working to bring the anti-blackness of policing in the United States to the forefront of our national consciousness — and applying strategic, sustained pressure on our elected officials until they do something to end police violence.

Finally, it also means keeping up on the news — while avoiding the urge to click “play” every single time there’s a new video of a police shooting.

In a country with a not-so-distant history of lynching black people and leaving their bodies hanging to terrorize entire communities, these state-sanctioned executions must never seem normal.