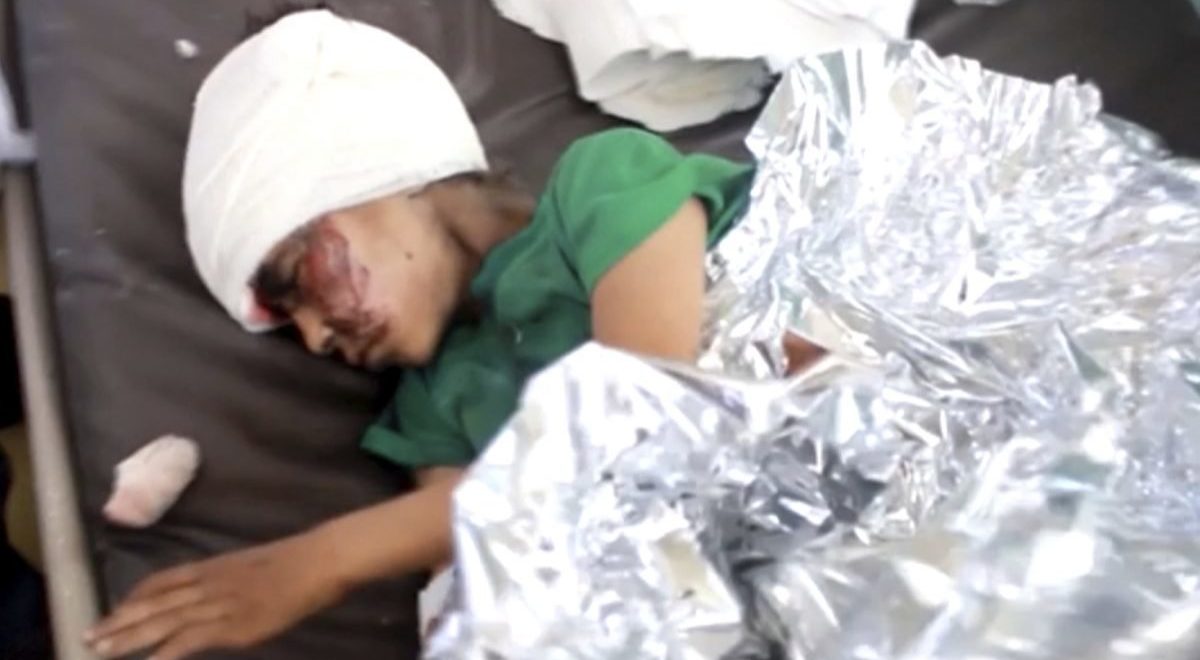 Above photo: This image made from video taken on Thursday, Aug. 9, 2018, shows a child injured in an airstrike resting at a hospital in Saada, Yemen. Yemen’s Shiite rebels are backing a United Nations’ call for an investigation into a Saudi-led coalition airstrike in the country’s north that killed dozens of people the previous day, including many children.

It must have been a moment of unspeakable shock, terror and pain. But it’s hard to know exactly what it was like at the moment last Thursday when a school bus packed with Yemeni schoolchildren — summer campers coming back from a picnic — was struck from the skies by a powerful bomb, because so few of these innocent kids survived to tell about it, and because those who did are mostly clinging to life, maimed or badly burned by the blast.

Instead, we can only gape at pictures of a twisted metal frame that hardly resembles the bus that was once filled with happy, singing children, or watch the widely circulated video of the aftermath of what happened in the market district of Saada in northern Yemen, in which a distraught, failing man raises the blue tarp of a pickup truck to reveal a tangle of young bodies as he lifts up the limp arm of one of the dead schoolkids.

At least 29 people — according to the International Committee of the Red Cross — and quite possibly 40 or 50, according to Yemeni estimates, were killed in the airstrike by jets in the Saudi-led coalition that’s been waging a brutal war against the Saudis’ next-door neighbor on the Arabian Peninsula for the last four years.

A spokesman for the Saudi coalition called it “a legitimate military operation” in its campaign against Houthi rebels that operate in northern Yemen — a claim that was scoffed at by most of the rest of the world, alarmed at the growing humanitarian crisis in the region.

“Does the world really need more innocent children’s lives to stop the cruel war on children in Yemen?” asked Geert Cappalaere, the regional director for the Middle East and Northern Africa of the aid group UNICEF. Many of the kids killed or wounded in the attack were carrying bright blue UNICEF school bags, now shredded and burned.

A collection of UNICEF school bags were in the possession of the children killed in the air raids of the US-Saudi aggression in Dahyan, #Saada, #Yemen on 09 August 2018 ??#Saada_Students_Massacre#مجزرة_طلاب_ضحيان pic.twitter.com/Jj82qVpKVF

The merciless Saudi-led war in Yemen — which has not only claimed 13,500 lives but triggered a humanitarian crisis in which some 20 million Yemenis, out of a nation of just 29 million, are scrambling for food and other basic necessities and as many as 900,000 people are suffering from cholera — is what it is today because of help from the United States.

America offers the Saudis and its allies in the region the intelligence used to carry out the nonstop airstrikes and other military operations. The planes that conduct the bombing runs are refueled by American forces in the region. And many of the bombs that have been dropped on Yemen — including those that have struck hospitals and other civilian targets — were manufactured and supplied by the United States.

It’s very likely the bomb that obliterated the school bus last week was an American bomb; a Pentagon spokesman conceded that, because of the lengths to which U.S. forces go to avoid operational knowledge of the war for which we otherwise provide such critical support, it officially doesn’t know whether we supplied these particular munitions. “We may never know if the munition [used] was one that the U.S. sold to them,” Army Maj. Josh Jacques, a spokesperson for U.S. Central Command, told Vox — a classic case of American plausible deniability. But people on the ground in Yemen say they can link American-made bombs to Thursday’s airstrike and other attacks on innocent civilians.

The remnants of the US bombs that killed Yemen children in the latest US-Saudi massare and war crime of August 9th, 2018

Thursday’s school bus bombing did accomplish one thing: The unavoidable carnage forced American media — which has all but ignored the conflict in Yemen, and our role in supporting it — to pay at least a little bit of attention, cramming a few minutes of coverage into the end of the hour, after all the latest inane tweets from the Madman Across the Fairway had been regurgitated and dissected. It shouldn’t have taken so long. There was no outcry a week earlier when a Saudi airstrike devastated one of Yemen’s largest hospitals, which houses a large cholera treatment center, or after scores of other attacks that have killed so many civilians, including — according to the UN — some 2,400 children, with an additional 3,600 who’ve been maimed for life.

This blood is on America’s hands, as long as we keep sending the bombs that kill so many Yemenis, and as long as we give the Saudis our unqualified diplomatic support in a messy regional conflict. And yet there’s been no public debate about the murky U.S. role out of this, and no clarification from the White House or the Pentagon over what we hope to accomplish by our support of the mayhem. There are, however, a few members of Congress demanding answers.

And we just bombed a SCHOOL BUS.

The Saudi/UAE/U.S. bombing campaign is getting more reckless, killing more civilians, and strengthening terrorists inside Yemen. We need to end this – NOW. https://t.co/P8V2L6Crgi

But efforts by Congress to end America’s role in the seemingly endless conflict have gone nowhere. In March, a bipartisan group of senators sought to invoke the Vietnam-era War Powers Act to limit U.S. involvement — “The Founding Fathers gave the power to authorize military conflicts to Congress, the branch most accountable to the people, Vermont Sen. Bernie Sanders declared — but were blocked on a procedural move. Senate Majority Leader Mitch McConnell insisted that American involvement is somehow limiting civilian deaths, a ridiculous claim that defies all available information, not to mention logic.

America’s entanglement in Yemen is so emblematic of the broader debacle that was once known as “the war on terror” but now has simply become the “forever war,” spanning the globe from Africa to the Middle East to Asia, with America firing missiles from drones or going on secret raids or lining up with butchering autocrats like the Saudis for nebulous and sometimes shifting aims. This all happens without legal authorization from Congress, or anything resembling an open democratic debate, and with seemingly no expiration date.

Like the rest of the “forever war,” Yemen is the fault of both parties — Democrat Barack Obama was the president who launched it, reportedly to keep the Saudis on board as he negotiated the 2015 Iran nuclear deal. Republican Donald Trump, who rabidly favors all things Saudi Arabia while opposing all things Iran, even if that risks World War III, is only escalating matters. Like other military engagements, we were told it would only last months, only to see it drag on for years.

Indeed, civilian deaths linked to U.S. involvement in the “forever war” on a variety of fronts, most notably in parts of Syria and Iraq, have spiked dramatically since Trump became president — but few Americans even know this, because there is such little news coverage of what is being done in our name.  We also don’t know how much of Team Trump’s pronounced tilt to the Saudis — including moving to kill the Iran deal — is the result of legitimate American geopolitical interests and how much is the result of corruption, given reports that an emissary of the Saudis and its close ally, the United Arab Emirates, came to Trump Tower in 2016 promising support for Trump’s campaign.

The best role for the United States in Yemen would be as honest broker for peace between the warring factions — seeking an end to a humanitarian crisis that not only could ultimately hurt American interests in the long run but which is flat-out immoral. And yet that’s the role we’ve shown zero interest in taking on.

You can judge a society on how much it cares for children — and America is failing abysmally right now. It’s impossible to look at the picture at the top of this post, of a badly wounded child in his tinfoil blanket, and not think of the hundreds of kids sleeping in cages, in those exact same blankets, in detention centers on America’s southern border. With cuts to the social safety net from Obamacare to food stamps — some proposed, some successfully carried out — we’re not doing much better by American-born kids. Saada, Yemen, may be halfway around the world, but it’s as good a place as any to stop the shameful treatment of God’s children.

We all can do better. The news media needs to do a much better job keeping American citizens informed about what’s happening in Yemen — and all the other outposts of “the forever war” — and how U.S. dollars and U.S. bombs are making these conflicts happen. The midterm candidates for Congress — from both parties — need to address this issue and tell voters how they plan to make this carnage stop, and be prepared to use the War Powers Act to block this administration from waging a war that’s not just ill-advised but which should be considered illegal. If the American people can take back control of what is being done in our name, maybe we can finally begin washing away this spreading moral stain.