I Kept All My Plastic For A Year – The 4,490 Items Forced Me To Rethink

Above Photo: Daniel Webb in front of his Mural-by-the-Sea. Photograph Ollie Harrop/Everyday Plastic

We all know, in theory, that we ought to use less plastic. We’ve all been distressed by the sight of Blue Planet II’s hawksbill turtle entangled in a plastic sack, and felt chastened as we’ve totted up our weekly tally of disposable coffee cups. But still, UK annual plastic waste is now close to 5m tonnes, including enough single-use plastic to fill 1,000 Royal Albert Halls; the government’s planned elimination of “avoidable” plastic waste by 2042 seems a quite dazzling task. It was reported this week that scientists at the University of Portsmouth have accidentally developed a plastic-eating mutant enzyme, and while we wait to see if that will save us all, for one individual the realisation of just how much plastic we use has become an intensely personal matter.

One early evening in mid-2016, Daniel Webb, 36, took a run along the coast near his home in Margate. “It was one of those evenings where the current had brought in lots of debris,” he recalls, because as Webb looked down at the beach from his route along the promenade he noticed a mass of seaweed, tangled with many pieces of plastic. “Old toys, probably 20 years old, bottles that must have been from overseas because they had all kinds of different languages on them, bread tags, which I don’t think had been used for years …” he says. “It was very nostalgic, almost archaeological. And it made me think, as a mid-30s guy, is any of my plastic out there? Had I once dropped a toy in a stream near Wolverhampton, where I’m from, and now it was out in the sea?”

Webb decided that he would start a project to keep all the plastic he used in the course of an entire year. He would not modify his plastic consumption in that time (although he had already given up buying bottled water), and each item would be carefully washed and stored in his spare room. 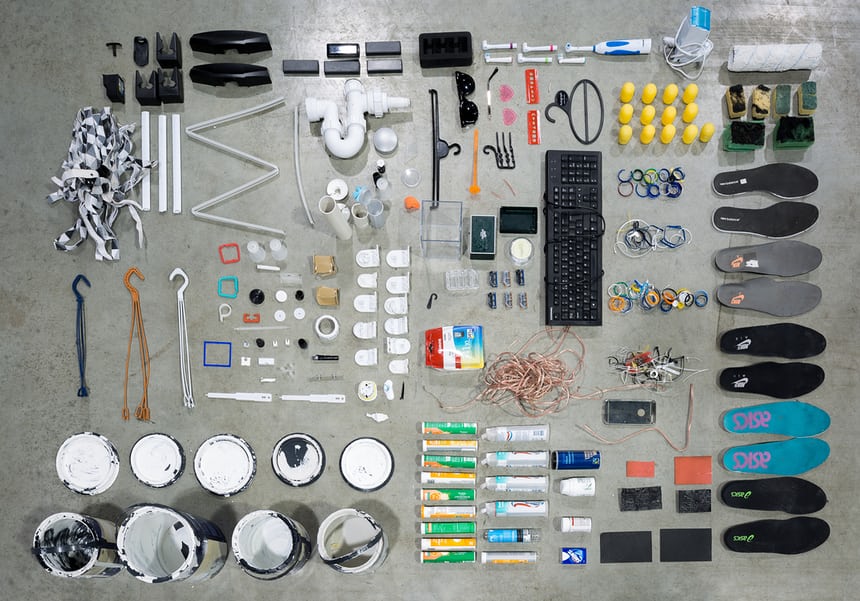 Webb is a fan of a project – prior to this he ran six half-marathons in six days – but he had little notion of what he would do with his personal plastic mountain until last summer, when he had the idea to make it into an exhibition. Earlier this month, Webb’s 12-month haul became part of the Mural-by-the-Sea project, displayed on a billboard at Margate’s Dreamland funfair, rechristened Everyday Plastic and documented by the photographer Ollie Harrop.

“Three days before the billboard went up, we started weighing and sorting and counting it all,” Webb says. “There were 4,490 pieces in the collection. If you take me as an average person and multiply it by the UK population it means we throw away 293bn plastic items a year.” But he is cautious about speaking in such terms. “As soon as you talk billions, it all becomes quite abstract,” he explains. “It’s like people talk about climate change, and you can’t get your head around it. But plastic is tangible, and if you take it back to individual items it starts to resonate.”

Of those 4,490 individual items, 60% was food packaging – largely salad and vegetable wrappers and bread bags. Ninety-three per cent was single-use plastic, and just eight items – mostly coffee lids – were made out of biodegradable material. 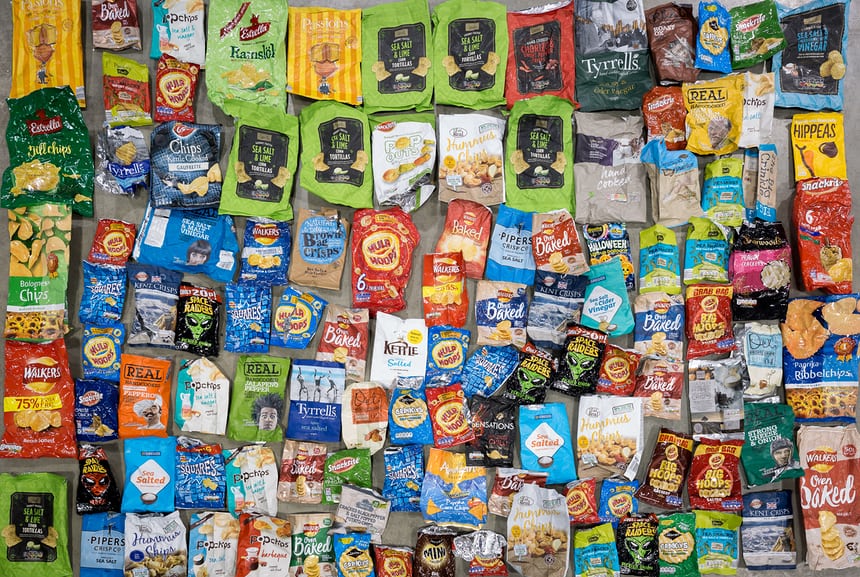 “I suppose it is a snapshot of a year in my life,” Webb says. “People look at the billboard and say, ‘Wow, you really like Hula Hoops, don’t you?’ Or they say how beautiful it looks, with all the different colours.” But it was looking at all the different-coloured items as he sifted through the plastic pile that proved the greatest revelation for Webb. “My reaction when I sorted it all into categories was quite visceral,” he says. “You get a really clear picture of what you’re consuming and you figure out that all of this stuff was just designed for you to buy it. That black plastic of meat packaging is to hide the colour of the blood, or the brown plastic of mushroom packaging makes the mushrooms look earthy.” He laughs. “I work in marketing, and I never thought I’d say this, but we really are being sold stuff we do not need. There is an epidemic of overproduction and overconsumption.”

Webb has been a Margate resident for two years, and as he made his regular visit to his local Aldi, he became increasingly aware that it was “practically impossible to go to a supermarket and come away without any plastic packaging … an aubergine comes in a plastic bag, onions come in a plastic net. And many of these things are made to be obsolete – something like a plastic bag is designed to be used for maybe just 15 minutes. People carry their shopping home in it and then they chuck it away. And it outlives all of them.”

Kerbside recycling is limited in Thanet, so prior to his Everyday Plastic project Webb diligently saved up all his bottles and paper and plastic and tins to take to the local recycling centre himself. “But when I took it to the tip, I said: ‘Excuse me, where’s the plastic recycling?’” he remembers. “And they said: ‘Mate, just stick it in the household waste.’”

Recycling, he says, is not the answer – after all, in Webb’s collection, just 56 items were made from recycled material. “And that highlights the limits of it,” he says. “Recycling is absolutely vital, and we need to invest more in recycling facilities and infrastructure. But really, we need to find ways of using less.”

“Supermarkets are lobbied hard by the packaging industry,” Webb says, talking of how he recently visited a shop in Brighton that prides itself on being plastic-free – an achievement that is, of course, laudable. But he also noted that 100g of bran flakes in the shop cost 55p – meaning an average-sized box would add up to more than £4. “We need subsidies for people doing this kind of thing,” he says.

The billboard is one element of what Webb hopes will become a bigger project. “I want to take it into schools, and I want to do an exhibition, and I’m working with Friends of the Earth and Surfers Against Sewage to take it to festivals this summer,” he says. He will also be publishing a report into the findings of his project at the end of May.

“I’m just one of millions of everyday people who have woken up to what they’re consuming,” he says. “And the aim is to speak to the awareness-laggers, making people realise that changing your whole lifestyle is difficult, but just changing one thing is still really important. I didn’t buy a water bottle last year and I might have used 300 – if everyone did that it would be saving a lot of plastic from going into the sea.”