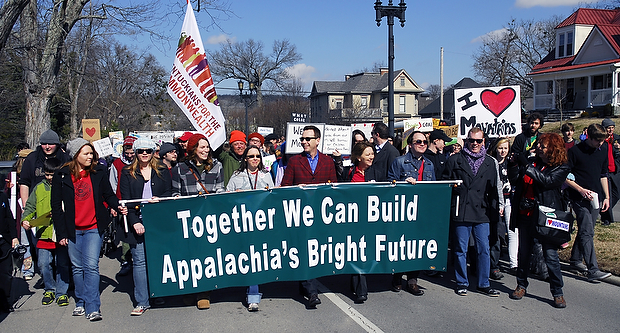 I Love Mountains March In Kentucky

Around 800 braved the snow and cold Wednesday, marching from the banks of the Kentucky River to the steps of the Kentucky State Capitol here to protest environmental pollution and the mining practice of mountaintop removal.

They listened as Sister Claire McGowan, a Dominican Sister of Peace from the St. Catherine Community in Springfield, told the crowd of her and other’s efforts to fight a proposed pipeline to carry natural gas liquids from Pennsylvania and Ohio through parts of Kentucky.

They heard songs by David and Phoebe Waggoner, Randy Wilson and nuns from the Loretto, Dominican and Charity women religious communities, all of whom have opposed the pipeline.

And they heard from Teri Blanton, of the Kentuckians for the Commonwealth, who has been a tireless advocate for cleaning up the waterways of eastern Kentucky polluted by mining runoff from mountaintop removal sites.

But as coal’s fortunes have declined recently, the “I Love Mountains Day” also took on a slightly different tone, turning more attention to other environmental issues like the pipeline than in previous years.

“Coal is on the decline, although the effect of mountaintop removal will still be with us,” said Suzanne Tallichet, KFTC chairperson from Morehead.

“But we’re not against coal,” Tallichet continued. “We’re against any extractive industry that pollutes our air and our water and the land and affects people’s health

Noted poet, essayist and novelist Wendell Berry was on hand again this year, but he said he doesn’t expect much response by Kentucky’s elected officials.

He said he’s been protesting surface mining and the effects on the land since 1964 but not much has changed.

“It has been hopeless so far,” Berry said of his decades’ long fight against strip mining. He noted the efforts by Gov. Steve Beshear and U.S. Congressman Harold “Hal” Rogers to reinvigorate the economy of eastern Kentucky – an economy that has relied for decades almost exclusively on the coal industry.

“But it is futile to try to do something for people while you let the land be destroyed beneath their feet,” Berry said.

Beshear and Rogers are stout defenders of the coal industry and both have criticized the efforts of the federal Environmental Protection Agency to regulate surface mining in eastern Kentucky. Many blame federal regulation for more and more lost mining jobs but most market analysts say competition from cheaper natural gas is the larger problem.

But Berry – for all of his disappointment about how little government has done to protect the environment says the effort to change things must continue.

“Opposing what is wrong is a necessary thing whether you defeat the wrong or not,” Berry said shortly before the rally outside the Capitol was to begin Wednesday.

Berry knows coal is a complicated subject in eastern Kentucky where many see it as the only means of livelihood and defend it fiercely.

“People are tragically caught if they have to destroy their own country in order to make a living,” he said. “You’ve got your family and your children and you’ve got to feed them if you can. But that’s a tragic choice to have to make. That’s what’s the matter with this one-economy region we’ve got up there. It’s entirely dependent on the coal industry.”