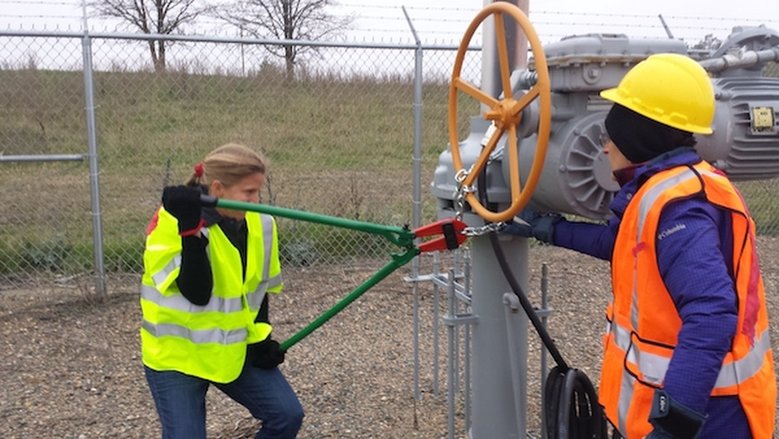 I Shut Down An Oil Pipeline

Above: Emily Johnston uses bolt cutters to break a chain that was locking down an emergency shutoff. From the Seattle Times.

Climate Change is a Ticking Bomb

A little over a year ago, four friends and I shut down all five pipelines carrying tar sands crude oil into the United States by using emergency shut-off valves. As recent months have made clear, climate change is not only an imminent threat; it is an existing catastrophe. It’s going to get worse, and tar sands oil—the dirtiest oil on Earth—is one of the reasons.

We did this very, very carefully—after talking to pipeline engineers, and doing our own research. Before we touched a thing, we called the pipeline companies twice to warn them, and let them turn off the pipelines themselves if they thought that was better; all of them did so.

We knew we were at risk for years in prison. But the nation needs to wake up now to what’s coming our way if we don’t reduce emissions boldly and fast; business as usual is now genocidal.

In shutting off the pipelines, we hoped to be part of that wake-up, to put ourselves in legal jeopardy in order to state dramatically and unambiguously that normal methods of political action and protest are simply not working with anywhere near the speed that we need them to.

One major hope of ours was to set legal precedent by using the “necessity defense” and bringing in expert witnesses to testify that because of the egregious nature of tar sands crude and the urgency of the climate crisis, we’d actually been acting in accordance with higher laws.

The classic example of a legitimate use of the necessity defense is when someone is arrested for breaking and entering after they hear a baby crying in a burning building, and rush in to save her.

Because it requires a high bar of proof—you must have tried everything else, the danger must be imminent, the action must be likely to be effective—courts seldom even allow this defense to be argued, or expert witnesses to be brought; their only concern, generally, is did you break and enter? Not why.

Three of our trials (which are in four states) had already rejected the use of the necessity defense. In North Dakota, the judge said essentially “I’m not going to let you put US energy policy on trial”. But recently, I and the other Minnesota defendants were finally granted it.

I have little doubt that the awful weather events of the last couple of months played some role in this—it’s not just scientists seeing the truth anymore: the building is indeed burning, and all the world’s babies are in it. I was struck by the North Dakota judge’s implicit understanding that letting science be spoken in her courtroom would have had the effect of putting energy policy on trial—of reversing, in effect, who was the defendant, and who the prosecutor.

We had no demagogues lined up; we had the nation’s pre-eminent climate scientist ready, as well as two people who were to speak on the effectiveness of actions such as ours (often referred to as nonviolent resistance). How far awry must a system go, before the laws of physics are forbidden in a court of law?

Yet it is indeed a dangerous thing to speak the truth sometimes—dangerous in particular to those who have been lying to us for decades, and who have gotten very, very rich by doing so. Those who are also, at the moment, running our country.

So I find myself feeling peculiarly exposed now. When I first heard the news, elated, I called and texted and emailed family and friends. I deeply regretted that my mother—who died in June—didn’t live long enough to see us do our best to change legal history.

I wish she had known that a judge had been persuaded by the legitimacy of our argument (if not yet of its rightness)—a judge, no less, in a county where the pipeline company, Enbridge, is the single largest property tax payer.

I’m heartened by the way the law can be supple—not a thing that, once set, holds that exact shape forever (or we’d still have slavery, and I couldn’t vote or marry), but a thing that responds—slowly—to our evolving understanding of what is just and true.

When it comes to climate change, there’s little enough to feel heartened by, so I’ll take it.

Emily Johnston is a poet and co-founder of 350Seattle.org. She will face trial starting 11 December on felony charges for shutting the emergency valve on the Enbridge tar sands pipeline in Leonard, Minnesota, together with her co-defendant Annette Klapstein. The charges carry maximum penalties of some 20 years in prison and fines up to $40,000.