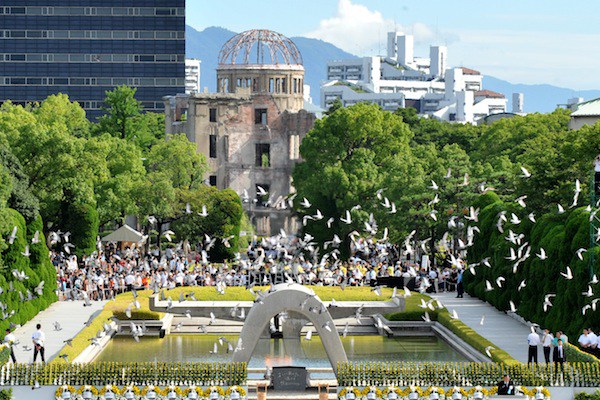 Above Photo: Doves fly over the Hiroshima Peace Memorial Park in western Japan on August 6, 2012 during a memorial ceremony to mark the 67th anniversary of the atomic bombing of Hiroshima. Tens of thousands of people marked the anniversary of the atomic bombing of Hiroshima as a rising tide of anti-nuclear sentiment swells in post-Fukushima Japan. AFP PHOTO / Kazuhiro NOGI (Photo credit should read KAZUHIRO NOGI/AFP/GettyImages)

“I survived because I was walking to a building that was behind a small hill that faced downtown. I was standing in such a way that the building was to my right and the stone garden was to my left. It was my daughter’s wedding day and I was pushing the wedding dresses in a wheelbarrow to the wedding hall. All of a sudden, for no obvious reason, I was just knocked to the ground. I never heard the bomb. . . I was about to get up when suddenly wood and debris fell from the sky and hit me on the head and back, so I stayed on the ground. . . . I couldn’t even hear the wood falling. . . . When I did start to hear, it was an odd sound. I ran to a hill area where I could look down to the city. I couldn’t believe my eyes. The whole city of Hiroshima was gone. And the noise I heard — it was people. They were moaning and walking like zombies with their arms and hands stretched out in front of them and their skin was hanging off their bones.”

Not everyone was walking. Not everyone was even so much as a prostrate corpse. Many people had been vaporized like water on a hot frying pan. They left “shadows” on the ground that in some cases still remain. But some walked or crawled. Some made it to hospitals where others could hear their exposed bones clacking on the floor like high heels. At the hospitals, maggots crawled into their wounds and their noses and ears. The maggots ate the patients alive from the inside out. The dead sounded metallic when thrown into trashcans and trucks, sometimes with their young children crying and moaning for them nearby. The black rain fell for days, raining death and horror. Those who drank water died instantly. Those who thirsted dared not drink. Those untouched by illness sometimes developed red spots and died quickly enough to watch the death seep over them. The living lived in terror. The dead were added to mountains of bones now viewed as lovely grass hills from which the smell has finally departed.

These are the stories recounted in Melinda Clarke’s small and perfect new book, Waymakers for Peace: Hiroshima and Nagasaki Survivors Speak. For non-readers, there’s video. There almost wasn’t. The U.S. Occupation Force forbid speaking of the horror from September 17, 1945 to April 1952. Film of the suffering and destruction was confiscated and stashed in the U.S. National Archives. In 1975 President Gerald Ford signed the Sunshine Law. The Hiroshima Nagasaki Publishing Company was told it would have to buy the film, raised the money, and bought it. Donations from over 100,000 people liberated the footage found in The Lost Generation (1982). Show it to anyone not working to ban nuclear weapons and war.

“I don’t blame America for the bombing,” says one survivor, who has the modern conception of war, if not the law, down pat. “When war breaks out any steps may be used, even the most severe and cruel methods to secure victory. The issue, it seems to me, isn’t That Day. The real question is war. War is the unpardonable crime against heaven and humanity. War is a disgrace to civilization.”

Clarke concludes her book with a discussion of the significance of the Kellogg-Briand Pact and the utility of what I proposed in When the World Outlawed War (2011), the celebration of August 27th as a day for peace and the abolition of war. Clarke includes a copy of a proclamation of August 27th as Kellogg-Briand Pact Day issued by the Mayor of the County of Maui in 2017, a step taken in 2013 by St. Paul, Minnesota. This upcoming August 27th is 90 years since the signing of the Peace Pact. I’ll be speaking about it that day in Kellogg’s hometown, the twin cities of Minnesota.

THE WAR ABOLITION COLLECTION:
Waymakers for Peace: Hiroshima and Nagasaki Survivors Speak by Melinda Clarke, 2018.
The Business Plan For Peace: Building a World Without War by Scilla Elworthy, 2017.
War Is Never Just by David Swanson, 2016.
A Global Security System: An Alternative to War by World Beyond War, 2015, 2016, 2017.
A Mighty Case Against War: What America Missed in U.S. History Class and What We (All) Can Do Now by Kathy Beckwith, 2015.
War: A Crime Against Humanity by Roberto Vivo, 2014.
Catholic Realism and the Abolition of War by David Carroll Cochran, 2014.
War and Delusion: A Critical Examination by Laurie Calhoun, 2013.
Shift: The Beginning of War, the Ending of War by Judith Hand, 2013.
War No More: The Case for Abolition by David Swanson, 2013.
The End of War by John Horgan, 2012.
Transition to Peace by Russell Faure-Brac, 2012.
From War to Peace: A Guide To the Next Hundred Years by Kent Shifferd, 2011.
War Is A Lie by David Swanson, 2010, 2016.
Beyond War: The Human Potential for Peace by Douglas Fry, 2009.
Living Beyond War by Winslow Myers, 2009.