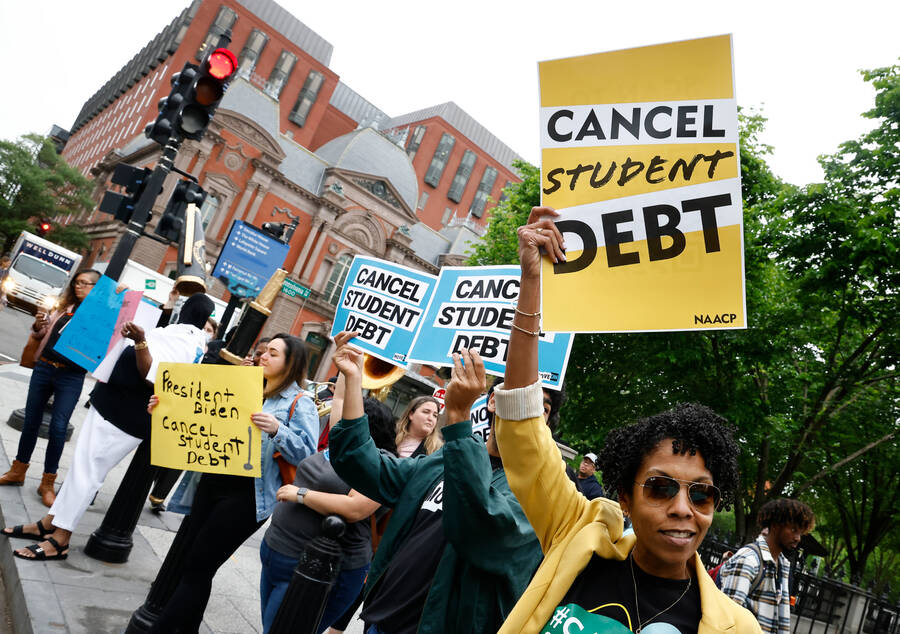 I Went On Strike To Cancel My Student Debt And Won

Above Photo: Paul Morigi / Getty Images For We, The 45 Million.

Every Debtor Deserves the Same.

This week, former students of Corinthian Colleges — a predatory for-profit school that once boasted more than 100 campuses across the country — received news that their student loans will be canceled. In an announcement, a Department of Education (DOE) press release called the move “the largest single loan discharge the Department has made in history.” As a former student of Everest College, which is a branch of Corinthian, I am overjoyed that everyone who attended the scam school will finally be made whole.

The action, announced on June 2, will impact 560,000 former Corinthian students and $5.8 billion in total student debt will be cancelled. This amounts to a stunning victory for debtors who took collective action to win relief.

But I want to set the record straight. This victory is not the result of the Biden administration’s good will. It is the outcome of a fierce organizing campaign by debtors that has been going on for almost eight years. I should know. I was part of a group of former students that launched a 7‑year long student debt strike to win loan cancellation from the federal government.

Now, as President Biden considers cancelling student loan debt more broadly, the outcome for former Corinthian students should send a clear message that the only way to resolve the issue of pernicious student loan debt is to cancel it for everybody and to do so automatically, without making borrowers individually apply.

My involvement started back in 2014 when I read an article that revealed my school was suspected of lying to and defrauding borrowers, many of whom were from low-income families. I was outraged to discover that Corinthian had been under investigation by the U.S. Senate since at least 2010 for breaking the law — all while continuing to receive billions of dollars per year in government funding. Investigators found that Corinthian lied to students about job placement rates, enrolled people who were not prepared for college-level work and offered a sub-par education. The college also provided falsified placement information to accrediting agencies in order to keep federal money flowing. Some of the evidence against Corinthian was compiled by then-California Attorney General Kamala Harris, who sued the school in 2013 for false advertising.

Furious and determined to fight back, I turned to social media and found that hundreds of former students of my school were gathering online to address the dilemma that we had found ourselves in: huge debts and worthless degrees.

Organizers from the Debt Collective, a union for debtors, had also heard about the plight of Corinthian borrowers and found our group on Facebook. They proposed that everyone who had attended the school join together to pressure the government to cancel our debts. There were few other choices: student debts cannot be erased in bankruptcy except in a few extreme circumstances. Turning our individual burdens into a collective demand was our only option.

In the winter of 2015, a group of former students met in person to plan the campaign. We were all in a similar situation. None of us had been able to find the high-paying jobs that Corinthian had promised, and none of us could afford to pay back the astronomical sums that we owed. We turned our inability to repay into a rallying cry and launched a student debt strike — the first in U.S. history — to demand the cancellation of our loans. We called ourselves the Corinthian Fifteen.

The law was on our side. We relied on an obscure legal mechanism called Borrower Defense to Repayment that required the government to cancel the debts of defrauded students. Since the DOE did not even have an application available to those who wanted to apply for relief, we worked with lawyers to design a form and then made it available on the Debt Collective’s website. By the spring of 2015, applications from former for-profit college students rolled in by the thousands.

Public opinion was also on our side. Our campaign went viral. Dozens of news outlets covered the story of the scammed borrowers who were taking on the Obama administration in March 2015. Strikers met in Washington, D.C. with officials from the Consumer Financial Protection Bureau, the Department of Education and the Treasury Department. We shared our experiences of being lied to and defrauded by Corinthian and delivered hundreds of applications for loan relief into the hands of Ted Mitchell, the Undersecretary of Education under President Obama.

Our campaign won the support of major media organizations like the New York Times editorial board and politicians like Sen. Elizabeth Warren (D‑Mass.) and Hillary Clinton. As more former for-profit college students realized they had been scammed, our numbers grew. We were joined by students who had attended other predatory schools such as ITT Technical Institutes. Our group of 15 strikers soon grew to 100. Thanks to the Debt Collective, we met with lawyers who helped us understand the consequences of not paying our debts. We knew that defaulted debtors could face wage garnishment and tax offsets. Older borrowers might have their social security benefits garnished. But we were ready for those consequences. Most of us could not afford to pay anyway and were already in default, so the strike was a way to politicize our inability to pay. We stood together for everyone in our situation across the country.

Unfortunately, the Department of Education dragged its feet. Officials claimed they cared about us and wanted to help, but rather than just canceling debts that were shattering lives and ruining futures, they set up a series of administrative processes and claimed they needed to study the issue. Little by little, a few former students who filled out the correct forms and checked the right boxes got their loans relieved. But hundreds of thousands of others waited in anguish.

I was one of the lucky ones. Finally, in 2017, I received an email from the DOE that said my loans were being canceled. My joy was tempered by the fact that thousands of others were still in debt. The news got even worse when President Donald Trump came into office. His Education Secretary, Betsy DeVos, halted the relief process that had begun slowly under Obama.

But the fight is far from over, and the stakes are higher than ever.

Back in 2010, when I enrolled at Corinthian, I didn’t know there was such a thing as for-profit education. I assumed that if the government was funding a college, it must be offering a quality education. My experience organizing a debt strike and talking to borrowers who attended colleges of all kinds has taught me that the problem is larger than scam schools. The for-profit college industry is part of a larger system of higher education that often promises the world while failing to deliver for students like me who don’t come from wealthy backgrounds.

Just like former Corinthian students won by turning our individual struggles into a collective demand, I believe we can win even more if student debtors from colleges of all kinds fight back together. We can demand a more fair and just higher education system and an end to the for-profit schools that prey on low-income students.

The change we seek can start with the flick of the president’s pen. Rather than hand-wringing over means-testing and debt caps, Biden can cancel all federal student loans via executive order. And Congress can pass a bill that makes public higher education free. These transformations are within our grasp. The Corinthian Fifteen put the issue of student debt on the national map. This week’s win for Corinthian borrowers should be extended to everyone — because no one should have to go into debt to follow their dreams.