Above Photo: ICON SPORTSWIRE VIA GETTY IMAGES. A loud cheer comes after the moments of silence at the end of the vigil at OccupyICEPDX, just in front of the ICE Portland Headquarters in SW Macadam on June 19, 2018, in Portland, Oregon.

Oregon Public Broadcasting reports:
“Demonstrators have also been camping outside the building and festooning the area with signs with slogans like “Kick out ICE” and “Will trade racists for refugees.” Two tents on Monday evening had increased to six by Tuesday morning. Twenty-four hours later, nearly 30 tents had been erected, with at least seven set up on a driveway to the building’s property. 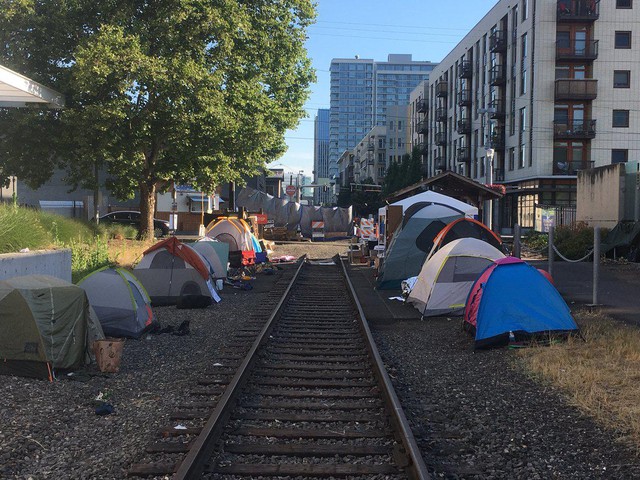 “The encampment — largely grassroots, but supported by a coalition of local groups — also has a medical tent and a kitchen area overflowing with donated water and food. A handful of tents on Wednesday sat near signs that read, ‘Family Camp. This space is for childcare and parents to rest. Please be mindful when near this space.’”

Immigration and Customs Enforcement’s Portland office temporarily shut its doors due to ongoing protests against the Trump administration’s “zero tolerance” immigration policy which leads to children being separated from their parents.

Dozens of protesters have been gathered outside the office since Sunday, holding up signs and banners (some comparing the agency to the Gestapo) and setting up tents in light of the rollout of the new policy, which has meant that every person crossing the border at an unofficial point of entry gets detained. So far, more than 2,300 children have been split up from their parents.

“We want the zero-tolerance policy to end. We want children to be released from cages,” Antonio Zamora, a demonstrator, told KATU. The news outlet reported that ICE employees were escorted out of the building by police on Tuesday.

Portland Mayor Ted Wheeler called the family separation policy “an abomination” and tweeted his support for the protesters, urging the police not to break up the demonstrations.

Meanwhile, local immigration lawyers said Wednesday that at least four children who have been separated from their parents since April have been brought to the Portland area.

Backlash continues to grow as more details ― children are being flown hundreds of miles away from their parents ― continue to be unearthed. President Donald Trump signed an executive order Wednesday that will prevent family separation going forward, but the “zero tolerance” policy will continue through a massive expansion of detention of both kids and parents.