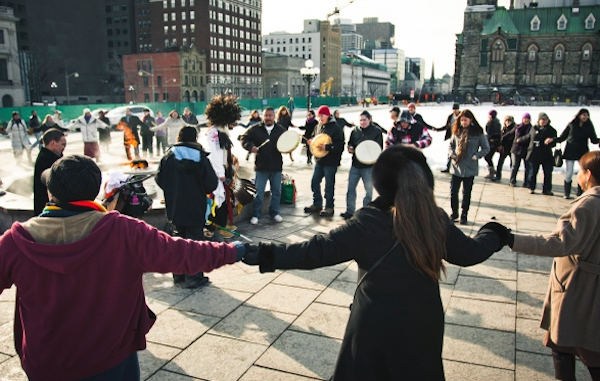 Idle No More: Where Is The Movement 2 Years Later?

These images are taken from the book The Winter We Danced. It is a collection of writing, poetry, lyrics, art and images from the beginning of the Idle No More movement. (Nadya Kwandibens/Red Works/ARP Books)

I grew up in the age of the standoffs.

For all of my formative 1990s — when I came into consciousness as an Anishinaabe and indigenous person — I witnessed communities putting their lives on the line against armed Canadians at Oka, Burnt Church, Gustfasen Lake, Ipperwash and countless other places.

The prospect of a peaceful future including Indigenous communities and Canada seemed bleak.

That is, until Nov. 2012, when a group of women in Saskatchewan held the first community teach-in about proposed omnibus federal legislation removing protection for water and proposing a sham process to lease First Nations territory — all in the interests of the Northern Gateway pipeline project.

They used the hashtag #idlenomore to help publicize the issue.

Their brave event — a mere blip on my Facebook page — turned into a campaign asking chiefs attending a National Assembly of First Nations meeting on Dec. 3 to go to Parliament and demand the bill’s removal. They did.

On Dec. 10 a national day of action was organized. On Dec. 17 a  flash mob round dance at the Cornwall Centre shopping mall in Regina attracted thousands of people in a messy, uneven but inspiring scene — and a YouTube video about it went viral that night.

I watched that video with my daughter and saw, for the first time in my life, a future path for this country.

Idle No More was the largest Canada-wide social action movement since the civil rights movement of the 1960s.

For six months — Nov. 2012 to April 2013 — the entire country was invited to an actual dialogue about how to be a good neighbour and family member, and what it means to be a country where indigenous peoples have always led, always taught and always gifted newcomers a future.

It’s two years later. Where is Idle No More now? Or, the question I get often: What was the point of the Idle No More movement? Did Canada change at all?

There is wide resistance to change, louder calls of “why can’t you people just get over it,” and a baffling prime ministerial pronouncement that nearly 1200 murdered and missing indigenous women do not show evidence of a sociological phenomenon while virtually every premier in the country says that’s wrong.

While the round dances in malls and marches have subsided, the hunger fasts on Victoria Island have ended and the calls for resistance to fast-tracked omnibus legislation has quieted, there is more collective action led by indigenous grassroots peoples throughout Canada than ever before.

Last August, the vigil to honour Tina Fontaine and Faron Hall, which saw 2000 Winnipeggers walking through the streets, was organized in four hours by people who had met during Idle No More.

The media has changed. Reporters cannot responsibly choose Ikea monkeys over indigenous peoples anymore. Canadian intellectuals and politicians like John Ralston Saul, Naomi Klein and former prime minister Paul Martin are now building careers off of the lessons they learn from indigenous peoples when writing their books and building their foundations.

Everyday Canadians are calling for treaty education, information about residential schools and then asking “why have I never been taught that this is my history?”

They are learning, often for the first time, what it means to be Canadian.

Idle No More is not a perfect movement, but name one that is. It cannot be disputed though that the direction of Canada was profoundly changed as a result of it and there is more to come.

While force is still a real possibility, Idle No More proved that Canada may be ready for another path too.