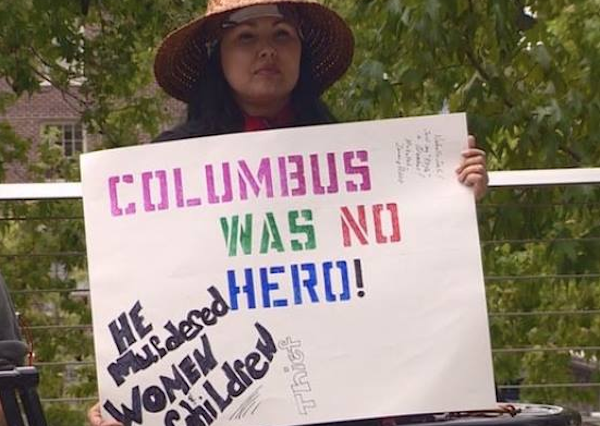 Idle No More: Why We Don’t Celebrate Christopher Columbus

We don’t celebrate Columbus Day in this house, and we never will. It’s not that we don’t enjoy holidays when they come around. We love holidays around here as much as anyone, but there are some holidays that, in my opinion, should not be celebrated.

Columbus Day is one of those holidays I believe should not be celebrated … ever!

In fact, in some places, government has started doing just that. In Dane County (Wisconsin) back in 2007, Ashok Kumar instituted Indigenous People’s Day, and did away with Columbus Day entirely. Before him back in 1992, Berkeley (California) went with Indigenous People’s Day instead of Columbus Day. In South Dakota, the entire state saw fit to rename Columbus Day with a more appropriate name, and since 1990, they’ve celebrated Native American Day.

So what’s the objection to Columbus Day, you ask?

It’s not like the holiday has been around for hundreds of years, people. It’s a relatively new holiday passed into law in some states as early as 1937. In states like Maryland, Columbus Day became a national holiday in 1971.

Up until then, nobody celebrated what Columbus had done … accidentally mistaken one continent for a completely different one altogether. Nobody celebrated the enslavement and rape of a specific cultural group. That’s right. Up until 1937, celebrating ineptitude and poor navigation wasn’t part of the American landscape, and neither was celebrating barbaric, inhumane acts.

And up until 1937, how many holidays were dedicated to someone who audaciously and erroneously claimed to have discovered an entire continent when millions of others already knew about that continent’s existence … because they lived there? Are we to believe that those who lived here were somehow non-humans inhabiting the land like the bears and the deer and the antelope and on and on and on?

And as long as we’re reading about people claiming to have discovered this continent, for years now, there’s been growing evidence that Chinese explorer, Zheng He landed on the shores of what became North America 70 years before Columbus did.

But still, why is it that we don’t celebrate Columbus Day in our house?

Because we don’t believe in celebrating a day that glorifies genocide. Genocide, you might repeat, shocked by the word. Surely that word only applies to the survivors of the Nazi camps of World War II, right?

How many of you know that before Christopher Columbus and his brother, Bartholomew, left to return to Europe in 1496, that they agreed to murder 1.1 million people because they were angry they hadn’t been able to humiliate the Taino into being subservient animals?

How many of you know that on Columbus’s second trip to San Salvador, that he and his crew enslaved thousands of indigenous peoples and exported them to countries such as France and Spain to be treated as beasts of burden? Did you know that those who weren’t shipped back as product were kept for the sexual gratification of Columbus and his crew?

Let’s not go down the road of believing that Columbus deserves a day of recognition because of his nautical genius. The man was lost at sea and history proves that his crew were ready to mutiny when they accidentally found land ho!

Isn’t it time we took a page from another country’s book and did the right thing by refusing to continue with celebrating Columbus Day? After all, no one celebrates Adolph Hitler Day in Germany using the argument that because he rescued the German economy, there should be a national holiday in his name.

So why do Americans celebrate Columbus Day?

One thing I can assure you is this:  Columbus Day will never be celebrated in this house!