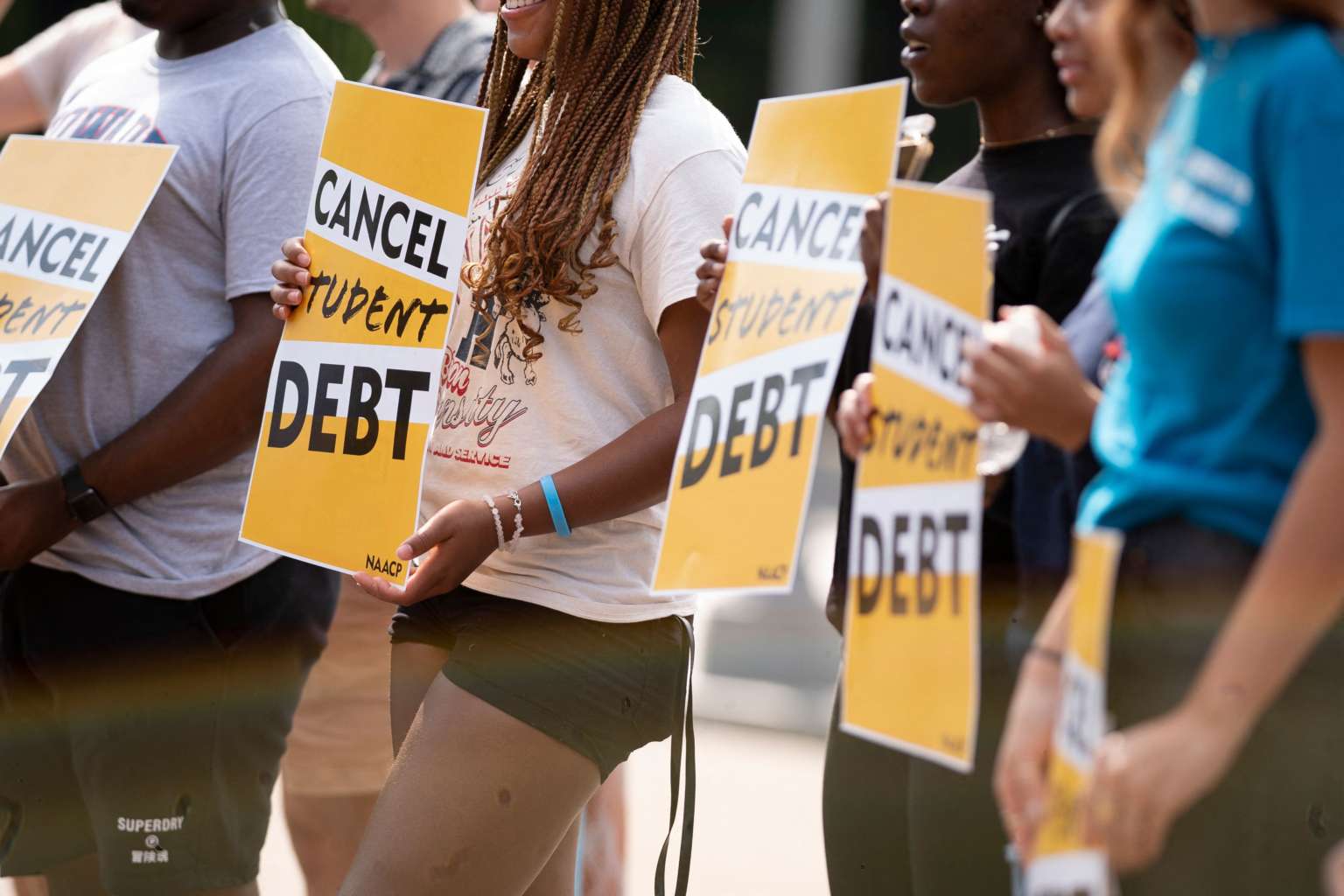 Above Photo: Activists hold cancel student debt signs as they gather to rally in front of the White House in Washington, D.C., on August 25, 2022. Stefani Reynolds / Afp Via Getty Images.

“I cosigned for 70K in loans to put my disabled grandchild through a private college that would meet his specific needs,” said a 70-year-old debtor I met during the Debt Collective’s virtual older debtors’ assembly in mid-August. “I don’t think I’ll be able to pay off these loans in my lifetime,” another debtor told me.

As I listened to these stories in a Zoom breakout room, I couldn’t help but feel overwhelmed by the conclusion that debt controls the lives of millions of people in the U.S., especially our most vulnerable. The Debt Collective, the nation’s first debtors’ union, is known for opening and facilitating powerful forums for conversation that enable folks to release the burden of shame and talk about how debt has impacted their lives. I’ve been organizing with Debt Collective for a year and I have come away with the same conclusion each time I leave an assembly: Americans desperately need full cancellation, and they need it now.

On August 24, President Biden announced a ground-breaking decision to cancel $10,000 of student debt for all borrowers who make under $125,000 annually. Americans who received a Pell Grant will qualify for $20,000 in cancellation, a move that is meant to target the most vulnerable. The administration’s decision to cancel up to $20,000 in student loan debt, including graduate and Parent Plus loans, will transform the lives of millions of Americans. Additionally, the moratorium will be extended through December 31st, Income Driven Repayment plans payments will drop to 5% of discretionary income, and changes will be made to the Public Student Loan Forgiveness program. About 20 million borrowers will have their debt entirely erased, which will give them more space to pay for everyday bills such as rent, food and utilities. But for the other 25 million Americans who will only have a portion of their loans canceled, will this plan be enough to have a significant, long-lasting impact? For most, the answer is no.

For many people, canceling $10,000 will not even make a dent in their balance. Borrowers with high debt-to-income ratios — those who live paycheck to paycheck, who worry about making rent after their loan payments each month, who find it difficult to imagine ever being able to purchase a home — will barely feel the relief this policy was meant to offer. This particularly holds true for Black borrowers.

Ben Miller, currently at the Department of Education, wrote in 2019, “That means borrowers who are on IDR [income-driven repayment] for long periods of time making low payments will likely see their balance grow. This is particularly worrisome because past analyses already showed significant gaps by race in the share of original loan balance repaid by borrowers over time.”

Moreover, Biden’s goal is to make it easier for people to keep up with their monthly payments by providing an IDR plan that cuts the total amount due in half. This is not the first time we have heard the promise that a new income-driven repayment plan will solve this crisis. In every case this has been a broken promise and a spectacular failure. For example, out of the 70,300 applications potentially eligible for income-driven repayment forgiveness in September 2020, only 157 had been approved by June 2021.

Adding an income cap of $125,000 will leave millions unqualified for cancellation. The income cap was adopted to protect against Republican pushback saying student debt cancellation benefits the rich, a claim that has been disproven. This decision ignores the inequities and complexities of financial life in this country by treating all who earn over that benchmark of $125,000 as wealthy graduates who should be able to pay back their loans. But income is not that same as wealth. Due to the racial wealth gap, which prevents people from different racial groups from beginning at the same starting place, instituting this cap leaves out Black borrowers who might make a higher income but have negative net wealth (where one’s debts exceed their assets due to systemic racism) and who are far more likely to have immediate family members in need of financial support.

Experts, and even officials inside the Department of Education, have warned for months that requiring an application will undermine relief by creating obstacles for the very people who need it most. We’ve seen this play out with Public Service Loan Forgiveness (PSLF), a flawed program with a massive administrative burden. Those who work long hours, those dealing with illness or disability, elderly folks who are not tech savvy, and those without reliable access to the internet will be at a disadvantage.

The decision to means-test this measly forgiveness and also turn payments back on at the beginning of 2023 is a disaster waiting to happen. When Biden announced his cancellation plan last week, the Federal Student Aid website crashed due to the high volume of debtors rushing to find out whether they had received Pell Grants. Servicers and other bureaucratic agencies are simply not prepared to navigate the nuances of this proposed plan, which strengthens the argument for automatic cancellation. Absurdly, the Department of Education has not even released the application that borrowers will need to use to begin the cancellation process.

If the president can cancel some of the debt, the president can cancel all of the debt. Biden has the authority to fundamentally change the lives of every single borrower, but refused not to use it to its full capacity. (Let’s also not forget Biden’s presidential campaign promised a more robust cancellation — $10,000 for everyone and full cancellation for all who attended public universities or Historically Black Colleges and Universities and make under $125,000). But despite the plan’s limitations, it nonetheless sets a precedent for future jubilees and underscores an important win for debtors. Presidential administrations and cancellation naysayers will never again be able to pretend there is no pathway to full student debt relief through executive powers.

After the announcement, my mind immediately went to the older debtors who can’t wait years for more cancellation to come. Older borrowers have given the Department of Education so much of their money — and more than that, they’ve given up their time, their energy, their dreams. Let’s not put the next generation of Americans through the same struggle.