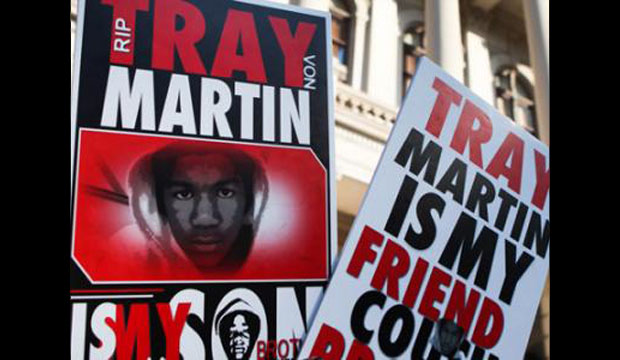 Trayvon Martin was murdered by George Zimmerman on February 26, 2012. The 17-year-old was visiting his father in Sanford, Florida and left his home to buy junk food at a local store. This simple act made him the target of George Zimmerman, a 21st century vigilante of the old slavery era patroller school.

The Zimmermans of this country have a very long history. The much debated Second Amendment to the Constitution gave the 18th century vigilante the right to control the enslaved and Native American populations. The “well regulated militia” was nothing more than a means of making sure that the white population had every other group under control with the threat and use of violence. Slavery was a perfect means of doing that. When it ended, Jim Crow and lynch law ruled. As we previously pointed out in Black Agenda Report, lynch law has never been repealed. Trayvon Martin is just the most famous victim of recent times.

George Zimmerman is now on trial for Martin’s murder and expert legal observers agree that a guilty verdict on the charge of murder is far from assured. The case ought to be open and shut. Martin was minding his own business and breaking no laws as he returned to his father’s house. The unarmed Martin was attacked by Zimmerman and a physical altercation followed. Trayvon Martin had a right to defend himself from being assaulted and there was no reason for Zimmerman to have ever approached him. Zimmerman ought to be found guilty and pay the heaviest penalty possible under Florida law. Instead he stands a good chance of going free because the deceased and any other black person who speaks for him has been put on trial in the court and in the court of public opinion.

“Trayvon Martin had a right to defend himself from being assaulted and there was no reason for Zimmerman to have ever approached him.”

The defense claims that the man without a gun threatened the life of the man who did have a gun. Rachel Jeantel, the friend who spoke to Martin before he was attacked was herself attacked in and out of the court room. It couldn’t be otherwise because her words should be enough to put Zimmerman behind bars for a long time.

If not for the courageous persistence of Trayvon’s parents Sabryna Fulton and Tracy Martin, Zimmerman would never have been charged. The local police didn’t arrest Zimmerman who they said acted properly under Florida’s “stand your ground” laws, an updated version of the 18th century militia. Stand your ground laws have been repeated in many venues across the country. At first glance they seem just silly, a solution in search of a problem. They are in fact quite serious, giving white people the right to shoot anyone for almost any reason. There are long standing and universally observed self-defense statutes which made stand your ground unnecessary. But if one group of people is to successfully maintain its power over others, no means of control can be over looked.

From the beginning, the victim was made out to be the criminal. Martin’s body was tested for drugs. Zimmerman was not. Martin’s grades in school, his facebook postings and his temporary suspension from school were and are still made an issue. Zimmerman’s history, education and deportment were never issues to law enforcement, or to the media for the simple reason that they don’t think he did anything wrong when he killed Trayvon Martin.

“The deceased and any other black person who speaks for him has been put on trial.”

In 2012 the Macolm X Grass Roots Movement published a report which detailed the extra judicial killings of black people by the police, security guards and self-appointed law enforcers like Zimmerman. In the first half of that year they reported that 120 black people were murdered in this manner, one death every 36 hours. That report was report was recently updated to show that modern day lynch law takes place every 28 hours.

If Zimmerman goes free how will black people respond? There will surely be public expressions of anger and anguish, but there is a larger question. As a group, how will we react to the denial of justice for Trayvon Martin and the hundreds of others whose names we don’t even know? It wouldn’t be enough to tell people not to be violent, or to march in silent protest.

There must be very public, very outspoken acknowledgement that our system demands that black people be victimized by those in authority on a regular basis. A volunteer security guard qualifies as an authority if he kills a black person. The songs, parades and kumbayahs should be kept to a minimum. Anyone who speaks about the case should be unafraid to tell the ugly truth about the many ways in which black people are targeted in this country.

The well paid pundits and black misleaders should be called out if they aren’t willing to speak openly about why Trayvon Martin was killed. If the Malcolm X Grassroots Movement is correct, some 300 black people have died in the same manner since the day Trayvon was killed. Their names need to be known and there should be a frank discussion about why they died. Mealy mouthed platitudes urging us to “talk about race” and silly questions about why black and white people see things differently are an affront to intelligence and to justice.

Trayvon Martin is dead because lynch law still lives. If George Zimmerman is acquitted that simple fact ought to be spoken loudly and often. If it isn’t then the injustice is magnified for Trayvon Martin and the hundreds of other unknown victims.

Margaret Kimberley’s Freedom Rider column appears weekly in BAR, and is widely reprinted elsewhere. She maintains a frequently updated blog as well as at http://freedomrider.blogspot.com. Ms. Kimberley lives in New York City, and can be reached via e-Mail at Margaret.Kimberley(at)BlackAgendaReport.com.