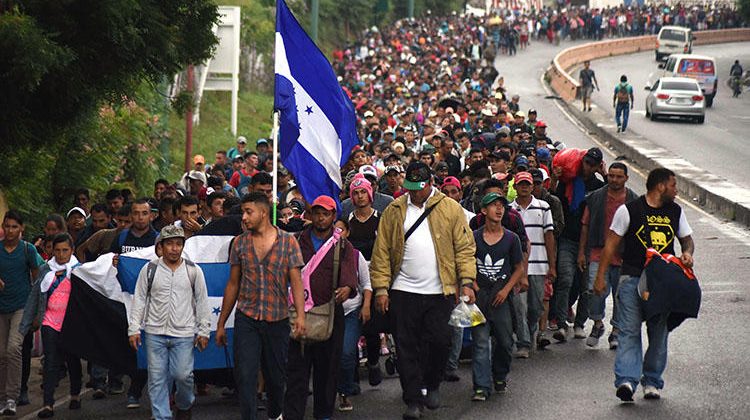 If It Were A Narco Lab, It Would Be Working

On the day he was inaugurated, Joe Biden halted the construction of Trump’s Mexican border wall. A few days earlier, 1500 miles to the south, a new ‘caravan’ of at least eight thousand Honduran migrants had set off northwards, partly in the hope that by the time they tried to cross into Texas, Biden’s promised softening of immigration policy might have taken effect.

Obstacles left by Trump still stand in their way. Agreements he made with Honduras and Guatemala led to police attacking and dispersing the refugees. Scattered groups are still heading towards the Mexican frontier at Chiapas – according to one Trump-era official, ‘now our southern border’ – where they will face Mexican troops. If they eventually reach the Rio Grande, they’ll join 25,000 asylum seekers in camps, waiting to be processed by US border officials. Roberta Jacobson, Biden’s official charged with forming his new ‘secure, managed and humane’ migration policy, has asked them to be patient and pleaded for no new arrivals.

Why do people take these risks? The truth is that Honduras is a failed state and, unless US policy towards it changes radically, many thousands more will head north. Since the military coup in 2009 there have been three corrupt elections. The last, in 2017, which saw Juan Orlando Hernández (JOH) re-elected when he had clearly lost, led to even more repression. Persecution of human rights defenders is unceasing, even after international condemnation of the murder of Berta Cáceres five years ago. Seven were killed in 2020, and four young leaders from Garifuna communities, abducted in a single night seven months ago, are still missing.

Curfews during the Covid-19 pandemic appear to have worsened the day-to-day violence: eleven corpses were found in the street in one week in January; bodies are being chopped up and left wrapped in plastic. Perhaps the most emotive case occurred earlier this month: a doctor and student nurse, who had been working with Covid patients, were arrested for breaching the 9 p.m. curfew. The doctor was freed, but the nurse died in police custody. Protests erupted. Five people were arrested, tortured by the police and forced to confess to crimes they didn’t commit.

In November, two hurricanes hit a country totally unprepared for them, destroying 6000 homes and seriously damaging 85,000 more. By December, JOH was touring financial institutions in Washington looking for money. He collected more than $3 billion in aid for hurricane victims, despite well-publicised corruption in the disbursement of funds donated earlier to tackle Covid-19. Shortly after his visit, federal prosecutors in New York –who a year ago established that JOH had created a narco-state – filed documents in a new drugs case. After quoting JOH saying he would ‘shove the drugs right up the noses of the gringos’ by flooding the US with cocaine, they accuse him of ‘embezzling aid money provided by the United States through fraudulent non-governmental organisations’. A Honduran narcotics lab, protected by the military on JOH’s orders, had been sending hundreds of kilos of cocaine to Miami every month.

The massive disruption caused by the storms provoked a fresh peak of Covid-19 infections: 1100 new cases on a single day in mid-January, the highest so far. Weakened by corruption and underfunding, the health service is overwhelmed. At least 75 doctors and dozens of nurses have died, many as a result of overcrowded wards and poor equipment. ‘We have to wait until someone dies to give their bed to someone else,’ a doctor said. To fill the gaps, seven mobile hospitals were ordered last March but only two are working properly. The head of the agency which made the $47 million deal, accused of corruption, was sacked. People protested under the banner: ‘If it were a narco lab, it would be working.’

Biden’s immigration policy includes spending $4 billion in El Salvador, Guatemala and Honduras to address the problems that spur migration. It should be obvious, not least from the evidence accumulated by New York prosecutors, that the ruling party in Tegucigalpa is unfit to govern, even if JOH is replaced in elections in November. But the problems go much deeper than that: the whole governing system serves the needs of big business – often North American companies – as it exploits both the land and the workforce, destroying the environment and maintaining the second biggest gap between rich and poor in Latin America. Throwing money at the problems could simply make them worse unless Biden makes the fundamental changes in US policy that both Obama and his secretary of state Hillary Clinton refused to contemplate. Perhaps aware that this won’t be achieved quickly or easily, Biden officials appear to have quietly asked Mexico and its neighbours to continue to deter migrant caravans, even as a new one is said to be forming.

JOH meanwhile faces not only political rejection but possible extradition if the US turns against him. He’s reported to be ‘trying to figure out how to refashion himself from a Trump ally into a Biden one’. He tweeted a photo of himself with Biden in 2015: ‘I hope we can work together,’ he wrote, ‘like in the past.’