“If Poor People Knew How Rich Rich People Are, There Would Be Riots In The Streets”

Chris Rock may be right. Still, Americans are well aware that economic inequality in their country is obscene, even though they often underestimate the growing gap between the poor and the rich.

But it’s Frank Rich, who conducted the interview with the American comedian, who made the more perceptive observation:

For all the current conversation about income inequality, class is still sort of the elephant in the room.

All the experts agree—from Thomas Piketty and the other members of the World Inequality Lab team to John C. Weicher of the conservative Hudson Institute—that inequality in the United States, especially the unequal distribution of wealth, has been worsening for decades now. Both before and after the crash of 2007-08. And there’s no sign that things are going to get better anytime soon, unless radical changes are made.

But, as it turns out, even the experts underestimate the degree of inequality in the United States. The usual numbers that are produced and disseminated indicate that, in 2014 (the last year for which data are available), the top 1 percent of Americans owned one third (35 percent) of total household wealth while the bottom 90 percent had less than half (45.3 percent) of the wealth. 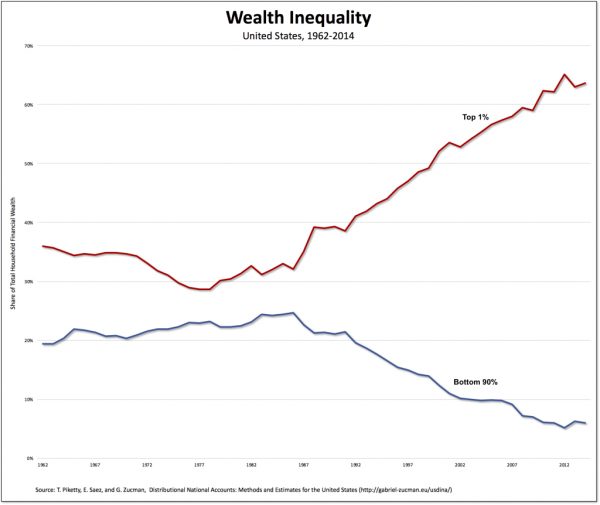 According to my calculations, illustrated in the chart above, the situation in the United States is much worse. In 2014, the top 1 percent (red line) owned almost two thirds of the financial or business wealth, while the bottom 90 percent (blue line) had only six percent. That represents an enormous change from the already-unequal situation in 1978, when the shares were much closer (28.6 percent for the top 1 percent and 23.2 percent for the bottom 90 percent).

Why the large difference between my numbers and theirs? It all depends on how wealth is defined. Both the World Inequality Lab and the Federal Reserve (in the Survey of Consumer Finances) include housing and retirement pensions in household wealth—and those two categories comprise most of the so-called wealth of most Americans. They just don’t own much in the way of financial or business wealth. They live in their houses and they retire based on contributions from their wages and salaries over the course of their work lives. They produce but don’t take home any of the surplus; therefore, they just don’t have the ability to amass any real wealth.

For the small group at the top, things are quite different. They do get a cut of the surplus, which they use, not only to purchase housing and put aside in their pensions, but to accumulate real wealth, for themselves and their families. If we take out housing and pensions and calculate just the shares of financial or business wealth—and, thus, equities, fixed-income claims, and business assets—the degree of inequality is much, much worse.

Yes, rich people in the United States are very rich—even more than either regular Americans or the experts believe.

But that’s not the real elephant in the room. The big issue that everyone is aware of, but nobody wants to talk about, is class. And that’s the reason there should be, if not riots, at least a sustained political movement to transform the existing economic and social structures in the United States.