If You Care Nothing Of Starvation, You Are Not A Socialist

Sentiments whip back and forth – a museum with ancient artefacts burns to the ground in Brazil as India’s Supreme Court decriminalises homosexuality.

The first – the fire in Brazil – should never have happened (as the journalist Mário Augusto Jakobskind notes) but did – partly because the government has neglected the infrastructure needed by fire-fighters (hydrants near the 200-year-old museum were dry, which is why Rio’s fire chief Roberto Robadey said, ‘Yesterday was one of the saddest days of my career’). The burnt museum is a metaphor for the political events in Brazil, where the ‘judicial coup’ against the people continues. Lula has been barred from being on the ballot for the October 7 presidential election. The struggle remains charged. These are tense times for the fragile remnants of Brazilian democracy.

The second – the court decision in India – should also never have been necessary. In 1861, the colonial authorities had copied their ancient English laws and foisted it on the Indian people. The ban against homosexuality enshrined in Section 377 of the Indian Penal Code was a barbaric verdict against humanity; it should have been cast aside when India adopted its Constitution in 1950. But it was not. Now, the Indian Supreme Court quite rightly (and unanimously) said, ‘Section 377 is irrational, arbitrary and incomprehensible as it fetters the right to equality for the LGBT community’.

There is a reason to frown and a reason to smile. That is the motor of our human struggle. 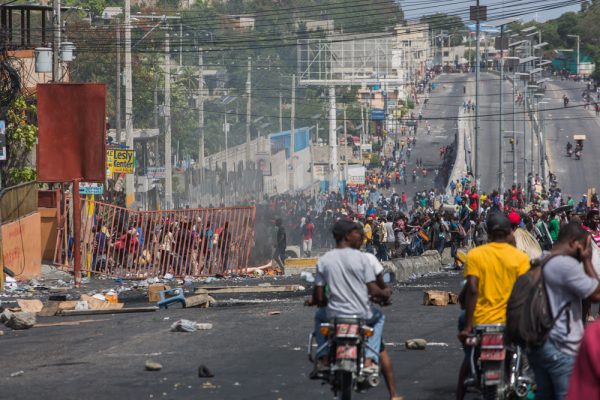 The word of our time is ‘cut’. Cut this, cut that, cut everything that makes human life possible for billions of people. The cuts dried up the hydrants in Brazil, and the cuts in fuel subsidies provoked the uprising in Haiti. News of the Haitian uprising or uprooting (dechoukaj) has largely vanished because of the short-attention span of the news media. From Haiti, the Jean Jacques Dessalines Solidarity Brigade – made up of members of Brazil’s Landless Workers Movement (MST) and of Argentina’s Patria Grande – sent us their report of the events on the ground. Our Tricontinental: Institute for Social Research dossier no. 8 is based on their report. It covers the long history of the uprooting, one that begins with the Haitian Revolution of 1791 and that continues to this day. We are mindful of the keen assessment of the Trinidadian Marxist C. L. R. James that revolutionary movements consist ‘of a series of uncoordinated periods of drift, punctuated by spurts, leaps and catastrophes’. But, as James wrote, ‘the inherent movement is clear and strong’. Please read our latest dossier, which you can download freely; please make sure to share it as widely as possible. The pictures in the dossier come from the Kolektif 2 Dimansyon, with the photograph above taken by its member Edine Celestin.

Cuts are what motivated hundreds of thousands of agricultural and industrial workers as well as farmers to come to the streets of Delhi for two major marches in early September – the first, on the 4th, a march for women, and the second, on the 5th, a march for the workers. The picture above is from the second march – giving a vivid illustration of the overlap between the two days in terms of the issues raised by the people and of the people who marched through the capital city: women were present in large numbers at both demonstrations. Issues of livelihood were central – vanished supports for farmers and agricultural workers, increased precariousness for workers in both the informal and formal sector. In their useful summary of the second march, Subodh Verma (of Newsclick) and Prashant R (of People’s Dispatch) quote a steel worker who looked at the rain clouds above and the red flags around him and then said, ‘These swirling dark clouds and this sea of red is a challenge thrown to the Modi government’.

The protests were organised by the All-India Democratic Women’s Association (which has a new website), the Centre of Indian Trade Unions, the All-India Kisan Sabha and the All-India Agricultural Workers Union. You have here the unity of the entire working-class and peasantry, a political unity that looks to strengthen the working-people of the country for a long struggle but also a show of force against the Modi government that comes up for election next year. The farmers and agricultural workers prepare to return to Delhi on November 28-30 for a three-day occupation of the capital (a strategy written about by our Senior Fellow P. Sainath). The workers prepare for a nation-wide industrial action early in 2019. 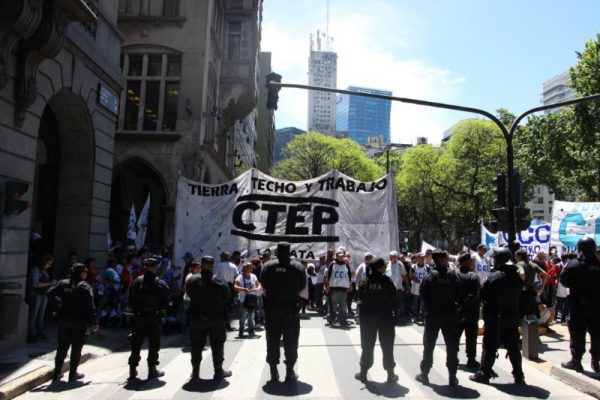 India’s Rupee struggles against the US Dollar – now at its lowest point. Much the same remains the case in Argentina, with the Peso unable to recover ground lost in the past few weeks. Turbulence in the currency markets mirrors the lack of sovereignty that these countries have over their economic policy and, their ability to manage the social needs of their population. In a poem written in his youth, W. H. Auden captured what it means when a country or a continent or an entire swathe of the world grows ‘anxious’ about its health,

The social outcome of this was the epidemic of hunger.

You might find these words familiar, words that speak of ‘a boom in sorrow’. One in eight people on our planet go to bed with hunger in their stomachs. In Argentina, I met small farmers who told me how hard it is for them to make a living, which is why they face two simple choices: desolation or struggle. The ones I met, who are part of the Movement of Excluded Workers, have chosen to struggle. Here is my report on the crisis of Argentina’s economy and on the imagination of Argentina’s growing Left.

Being in Argentina’s farmland reminded me of meeting migrant workers from Bihar in Gujarat a few years ago. One of them told me something that has haunted me ever since: ‘hunger is a constant sound inside my head’. It is where I begin my column this week, a column that ends with this admonition, ‘human beings who can come to terms with the prevalence of hunger have lost their humanity’.

Lula’s government in Brazil had created a policy – Fome Zero (Zero Hunger) – to eradicate hunger and poverty. The programme made great strides and almost achieved its goal. Now, Lula is in prison, the current right-wing government’s austerity policies have cut such programmes as Fome Zero and hunger rates rise in Brazil. The theology of GDP drives policy, which should be driven – as our friend Professor Amiya Kumar Bagchi writes in a recent review– by ‘sympathy, sociability, and willingness to engage in collective action’.

The farmers and agricultural workers who march in India and Argentina grow food, but they find it hard to eat. The grip of monopoly firms is hard to unravel. Three monopoly firms control the world seed market – DuPont, Monsanto and Syngenta. Ten firms own every single major food brand – Associated British Foods, Coca-Cola, Danone, General Mills, Kellogg’s, Mars, Mondelez, Nestlé, PepsiCo and Unilever. At the New Frame, Raj Patel writes about food sovereignty as the key to a just future. If you haven’t read it, I recommend you read Raj’s book Stuffed and Starved. From Farm to Fork: The Hidden Battle for the World Food System (2013). In this recent article, Raj writes that food sovereignty does not mean cheaper food – which often leads to unhealthy food and an impoverished workforce – but ‘higher wages, better welfare entitlement and comprehensive agrarian reform, which means land reform in rural and urban areas. It’s an approach that values everyone’s voice equally, which also means gender equality’. This is an agenda that would make sense to the farmers who have been on the march this week.

It is an agenda that would have made sense to the Communist leader Godavari Parulekar (1907-1996) – who we honour this week in our #TricontinentalTBT (see below). Godutai was a major leader of the peasant and Adivasi struggle in western India. Her work and its legacy is documented by Archana Prasad in Red Flag of the Warlis. History of an Ongoing Struggle. At the Agricultural Institute in Kosbad (Maharashtra), there was a large banyan tree from which one could have a commanding view of the Arabian Sea. Godutai held many meetings under that tree. All Adivasi farmers who came to a meeting there carried a stone from their villages. They would put the stones in a pile beside the tree. The size of the pile represented their strength. We are still carrying our stones to our meetings.