If You Oppose US Imperialism, This Is The Place To Be

We are still writing to you from the Venezuelan Embassy in Washington, DC where we are here as the Embassy Protection Collective with the full permission of the Venezuelan government. We have the grave responsibility to hold this space from takeover by the opposition, which would happen with the assistance of US law enforcement, until the Venezuelan government can complete negotiations with the United States over the status of their respective embassies.

What hangs in the balance is the possibility of a peaceful and orderly resolution to the end of diplomatic relations, and perhaps an entry to further negotiations, or, an escalation of aggression between the United States and Venezuela that could spiral into greater global conflict. Every moment, we are doing what we can to maintain a strong physical presence at the embassy, create a positive image of our collective and counter opposition tactics.

Support the Embassy Protection Collective by signing the Declaration, volunteering to participate, and/or donating money or supplies. You can contact us at info@popularresistance.org. 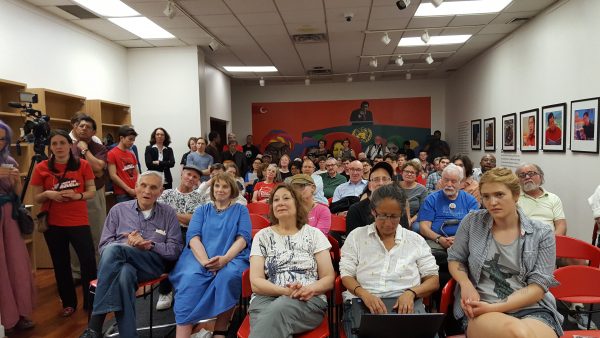 The Embassy Protectors are here with permission from the elected Venezuelan government, which is the government in power. On Wednesday, Carlos Ron, the Vice Foreign Minister, sent us a video message of support. Thursday, we held a virtual event with the Foreign Minister, Jorge Arreaza, and the United Nations Representative Samuel Moncado, who were in New York City. They also expressed their full support. The next day, Arreaza was sanctioned by the United States. On Friday, we received a message of solidarity from President Nicolas Maduro.

We are making it clear to the State Department that we are in the embassy with the full knowledge and support of the Venezuelan government. If they or the opposition enter the building, they will be trespassing  in violation of the law. Further, as we have been living and working from the embassy for more than two weeks, we have established tenancy. In Washington, DC, building owners are not allowed to evict tenants without due process.

Although we are on the lawful side of this situation, we recognize that doesn’t necessarily matter to the US ruling class. We are one impediment to their plans to install a puppet government and plunder the rich assets of Venezuela. We know how that turns out. Look at the Congo or Afghanistan, among other targets of US imperialism. We are training regularly in nonviolence and have pledged to stay here peacefully to hold this space until the Venezuelan government finds a permanent protectorate for the building. 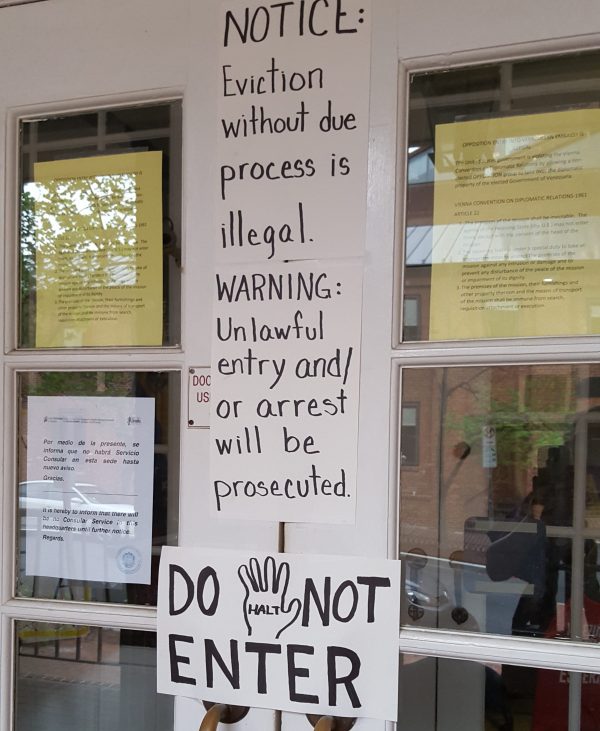 Front door of the Venezuelan embassy, by Margaret Flowers.

The United States and Venezuela ended diplomatic relations because of persistent US interference in Venezuela. The US has been working overtime to replace the government that supports the Bolivarian Process and both end that as a possible example of what it looks like when a country prioritizes the needs of the poor and to gain access to Venezuela’s reserves of oil, gold, diamonds and more.

When US efforts to de-legitimize the 2018 presidential election failed, the US government attempted to assassinate President Maduro and failed. The US then led a coup effort starting in January of this year, which also failed. However, the US government, and its proxies such as the Organization of American States (OAS), refuse to acknowledge their failure and are recognizing opposition leader Juan Guaido as the president. The US has given Guaido access to Venezuela’s financial assets that are in the US and turned over the Venezuelan consulate in New York and two military attaché offices in Washington, DC. The opposition now has its eyes set on the Venezuelan embassy in Washington, DC.

If the Venezuelan embassy in Washington is taken over by the opposition, it will have disastrous results. The Venezuelan government declared that if this happens, they will take the US embassy in Caracas. The US will view this as an act of aggression, and because it is already looking for an excuse to do so, could attack Venezuela. Because Russia and China are close allies of Venezuela, this could spark a global conflict.

On the other hand, there is a path of peace. The US negotiated an agreement with Switzerland to serve as a protectorate for the US embassy in Caracas, but this requires approval by the Venezuelan government. Venezuela is in negotiations to find a country willing to serve as a protectorate for its embassy. If that occurs, the two countries could reach a mutual agreement.

This might start a process to further negotiations to end the coercive measures and threats of military attacks by the US against Venezuela. We are serving as interim protectorates until negotiations are complete. We hope we can hold this space until that occurs, but the threat of the Secret Service coming into the embassy, arresting us and turning it over to the opposition looms over us. 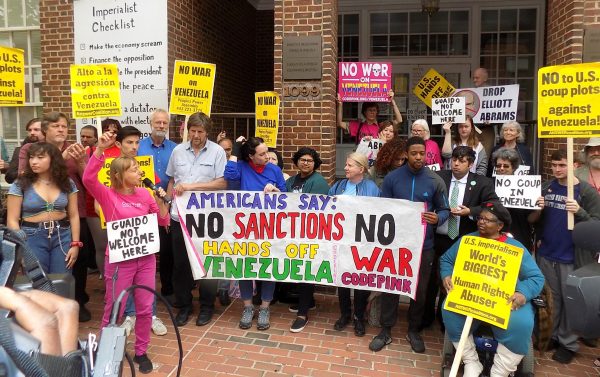 From The Georgetowner, by Robert Devaney.

We began the Embassy Protection Collective with CODEPINK and the ANSWER Coalition, on April 10, the day after the OAS changed its rules and recognized Juan Guaido as the ‘president’ of Venezuela. Guaido wants to place Gustavo Tarre as the OAS diplomat in the embassy, a man who served in the Venezuelan Congress in the 1970s to 1990s, the period before the Bolivarian revolution, and a long time player in the Washington Consensus.

For our first week in the embassy, we spoke to many lawyers about possible legal options to prevent the takeover of the embassy. It became clear, though, there are none because of a doctrine of non-judiciability, which basically means this is a political question, not a judicial one.

After that we turned to a strategy of bringing as many Embassy Protectors and as much attention to the embassy as possible. The response has been tremendous with large groups of people working and living here. But, the reality is that we have to hold this space for weeks or possibly months, cooking, cleaning, creating media and providing our own security.

The top need we have is for more volunteers. If you are interested, fill out the contact form here and we will be in touch. Some people come here to work during the day. Others sleep here and go to work r school in the morning. We also hold public events every evening – speakers and cultural events. The more people that are here, the better. And all ages are welcome. On Saturday, people from three months to 106 years joined us.

This is a historic moment. We have an opportunity, and a responsibility, to prevent our government from the illegal seizure of the Venezuelan embassy, an act that would violate the 1961 Vienna Convention and set a dangerous precedent for further violations. It doesn’t matter what you think of President Maduro, although personally we have great respect for him, what matters is that we as people in the US must demand our government respect the sovereignty and self-determination of other peoples to choose their leaders and decide their fates. 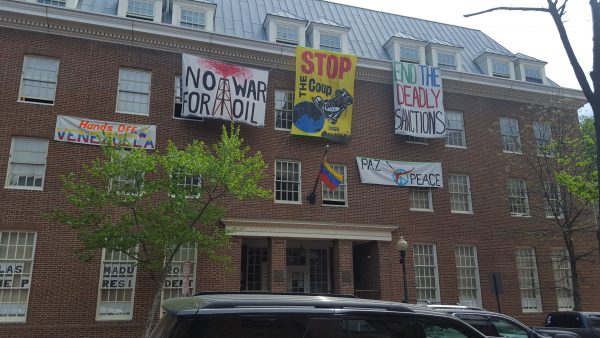 The Venezuelan embassy, by Margaret Flowers