If You Think Education Is Expensive, Try Ignorance

Such important news from the Korean peninsula. The heads of government of North and South Korea have agreed not only that ‘the era of no war has started’, but they have come up with a series of proposals to strengthen ties across the peninsula. Military drills will end, missile sites will close down, mines will be dug up, road and rail lines will link the two halves of Korea, and North and South Korea will put in a joint bid to host the 2032 Summer Olympic Games.

No-one could have anticipated the speed of these developments. Hovering around these talks is China, which has encouraged North Korea to make its concessions (and has promised to invest heavily on its border with North Korea – an area that is China’s own rustbelt). The United States – on the other hand – has not been as clear, with mixed-signals about its desire to retain its massive military footprint in South Korea (30,000 US troops) and in Japan (50,000 US troops). The United States is the main impediment to peace in the peninsula. China, cleverly, has said that the future of the peace negotiations rests with North Korea, South Korea and the United States. Since the two Koreas agree about demilitarisation, the burden is now with the United States.

When the two Germanys reunited in 1990, the USSR was on the verge of collapse and East Germany effectively became a colony of West Germany. No such situation prevails on the Korean peninsula today. China has encouraged North Korea from a position of strength. It is unlikely that North Korea will slip into being a step-child of the South (the first dossier – in March 2018 – from Tricontinental: Institute for Social Research was on the crisis on the Korean peninsula).

The picture above – Family 2 – is by the Korean printmaker Oh Yoon (1946-1986). It was made in 1982 when South Korea was ruled by a military dictatorship. Could it be that the artist hoped someday for the reunification of Korea? During the dictatorship the South Korean students emerged as a leading force for change, demanding an end to military rule (as in the 1987 Great June Democratic Struggle) and helping build the new trade union movement. These struggles put the question of the reunification of the peninsula on the table. The students must be thanked for the political work they have done to bring us to this point.

So too must the Korean people. If anyone is to win a Nobel Peace Prize, let it be the people of Korea who have suffered as virtual hostages during this long Cold War. 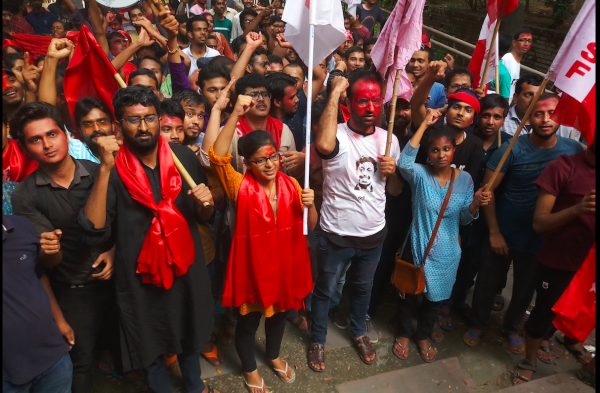 No question that the student movements in our various countries have played important roles in deepening democratisation in our societies. The Natural Disorder of Youth – as the revolutionary French students wrote in 1968 – allows young people to imagine other ways of social organisation, to dream of a better world than that which they have inherited from their parents. But, globally, the attack on public education and on the freedom of students has been sharp. The spear here has been the World Bank, the International Monetary Fund and other such institutions which have pushed to dismantle public education and to destroy the function of learning – which should be to grow the mind, not to prepare young people to be workers.

My report this week begins in the midst of the protests by students in Paris (France) and Mexico City (Mexico) and Bogotá (Colombia). Violence against students has become so common. At Jawaharlal Nehru University (New Delhi, India), the United Left slate won the student elections by a considerable majority. The students of the fascistic bloc came onto campus and beat the students of the Left with viciousness (including our Tricontinental: Institute for Social Research scholar Satarupa Chakraborty). It is to the shame of the ruling Indian government that the Minister of Defence Nirmala Sitharaman could suggest that the students were ‘waging war against India’. To dream of a better society is not to wage war against one’s country; it is the essence of patriotism. There is something ugly about such language used against students.

Ugly too to dismiss the hopes of the students and constrain them by cutting public funding and increasing the incentives for the privatisation of education. My report asks, ‘What does it mean in our time to be young and hopeful? Where can young people talk about ideas and imagine better worlds? Public spaces have increasingly been taken over by corporations, while colleges have been transformed into job factories. This is the enclosure of the mind, the suffocation of humanity. More needs to be fought for—more colleges, more imagination—the natural disorder of youth, a yearning for a world without want’.

A progressive attitude towards education insists that students are not just taught skills (as in vocational education), but that they are allowed to grow in mind and heart – that they engage their society, understand its limitations and contradictions and develop their experiments to overcome these constraints.

If you think education is expensive, think about the expense of ignorance.

The government of Kerala’s Planning Board has set up a website to collect your suggestions about what education could look like – they would like you to share your imaginative thoughts that perch beyond the horizon of what can be seen now. The Planning Board wants your ‘innovative, sustainable and practical ideas/solutions’ that will address the challenges faced by Kerala and the rest of us.

Last month, in Buenos Aires (Argentina), I watched the students and teachers fight to defend their right to education. Argentina is one of a handful of countries where education from nursery to university is paid for by the accumulated social wealth. There are, nonetheless, immense problems with the educational system, with the quality of education in severe need of improvement. Set upon by an economic crisis that is the responsibility of Argentina’s elites rather than its workers, it was the latter who were being asked to pay the bill by cuts in public education. That was unthinkable for the students and their families. Weeks of strikes challenged the government’s poor economics and insisted that alternative strategies be found.

My report at Newsclick tracks these developments. So does the Tricontinental: Institute for Social Research team in Buenos Aires, whose Coordinator is pictured above with his students in an outdoor classroom in the Plaza de Mayo. The team will produce a dossier that is on the IMF-driven agenda that threatens to drain Argentina’s public finances. It will be out in November.

Typical of a right-wing state to ignore the pressing questions of education and social harmony and to emphasise xenophobic ideas. The Argentinian state, which dismissed the students, continues to torment the most vulnerable workers – most recently Senegalese hawkers, many of whom sold the green bandanas used by Argentina’s millions to demonstrate their support for the abortion law. The leadership of the Movement for Excluded Workers (MTE) went out on the streets to defend these workers and were themselves arrested.

This is a common ploy of the right-wing: 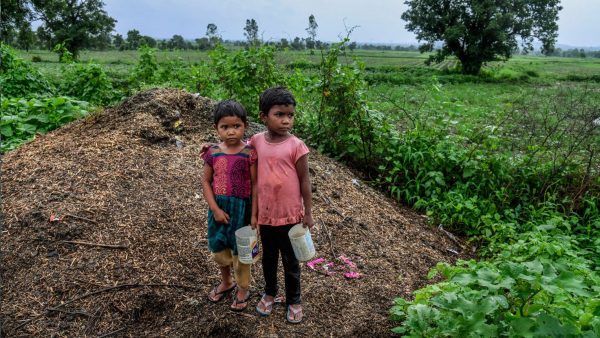 Tricontinental: Institute for Social Research’s Senior Fellow P. Sainath has been writing about the atrocity in Yavatmal (Maharashtra), where the farmers are faced with a chemical assault from insecticides. One account of the nastiness was documented by Jaideep Hardikar’s hard-hitting three-part investigative report at the People’s Archive of Rural India from March of this year. The poison is exported to places like India by the Swiss firm Syngenta. It is also exported to Brazil, where eleven people die per day by its poisons. The UN says that 200,000 people die per year due to these ‘obsolete pesticides’ (such as paraquat). Last year, two UN Special Rapporteurs – for the right to food (Hilal Elver) and on toxics (Baskut Tuncak) called for a Global Treaty on Toxics – especially on poisonous pesticides and fertilizers.

This week, the Switzerland-based investigative group Public Eye has released a report on the chemical warfare against the farmers of Maharashtra. Public Eye suggests that Syngenta should be held accountable for the sale of this harsh chemical fertilizer. The fertilizer not only poisons the environment, but it is also used by farmers to commit suicide when they fall into impossible debt.

There is a photograph in the report that stopped me. It is of a ledger kept when the farmer buys the fertilizer. When the farmer indicates understanding of its dangers, a signature is required. An obscene number of farmers cannot read and write. They mark the ledger with their thumb print. The state is no longer concerned about literacy. Farmers are at the mercy of the dominant castes, many of who use their own literacy as the means to take advantage of illiterate agricultural workers and small farmers from the sale of calves to the purchase of crops. The agricultural workers and small farmers are at the mercy of the large landholders, the moneylenders and the monopoly agri-business firms. Keep in mind that in the West, Syngenta runs a Summer Fellowship Programme for eager youth who want a career in agricultural science. No such fellowship or education for the farmers.

Pressure is on in Switzerland. The last line of the report is clear – ‘the sale of the product must be discontinued’.

The picture above is from the Public Eye report. It shows two children in an open field. ‘Once the pesticides have been used’, the report documents, ‘the containers they were sold in are recycled for other purposes. They’re often used for transporting drinking or washing water. We see children using pesticide containers with red warning triangles to wash themselves in the open air. We see containers used for toxic pesticides hanging on latrine doorways and in kitchens. They’re everywhere’.

The farmers in Yavatmal take out loans to buy this poison. They are – as a class – in debt. Many farmers commit suicide. Others die from the toxins. Syngenta is worth $43 billion. 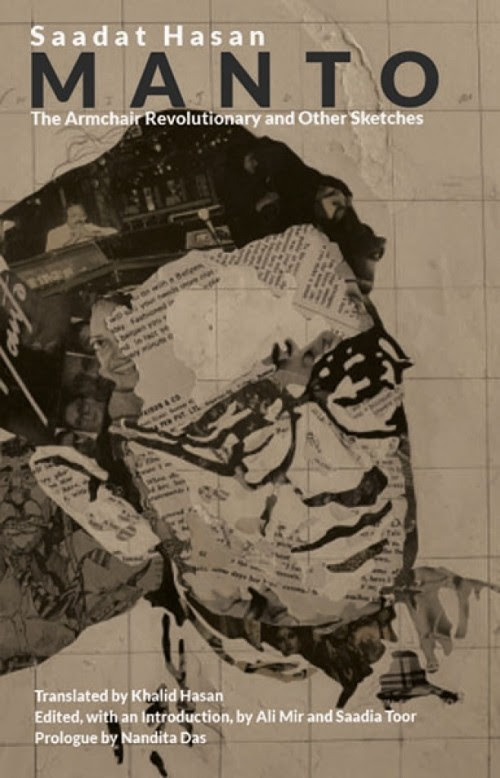 Today – September 21 – Nandita Das releases her new film – Manto – based on the life and literature of the great writer Saadat Hasan Manto (1912-1955). At the LeftWord Books blog, Nandita answers some questions about her film. Two years ago, Nandita helped us with a book we had done of Manto’s writings on socialism and film. We wish Nandita luck with her film and hope that those of you who have not read Manto will take this opportunity to do so.

Our picture this week – below – is of the Mexican muralist, Communist and founder of the League of Revolutionary Writers: Aurora Reyes Flores (1908-1985). This brilliant artist understood clearly the importance of education. She fought for the children of schoolteachers to have day care centres, so that their parents would not worry about them as they taught the children of others. This is the 50th anniversary of the Mexican student rebellion of 1968. Aurora Reyes was an active participant in that uprising, for which she was sought by the police. She hid in a psychiatric hospital. 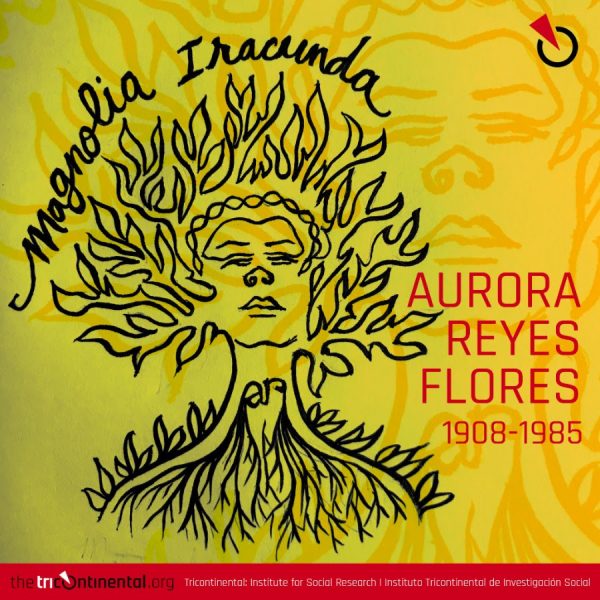