Above photo: Sign at Rally in Portland-November 17, 2011 from Our Curriculum Matters.

A Response to Ralph Nader

We do the work.

Well-known political commentator and activist Ralph Nader was recently featured in a Truthdig article titled, “Why Aren’t the 99% Revolting?”. The points made in the article sharply illustrate the scale of growing crisis and conflict across the US and globally. It covered issues as wide-ranging as medical care, climate change, and the titanic disparity of global wealth distribution. It concluded with the following, hollow statement. “I could go on and on. Pick up the pace, readers. Senator Elizabeth Warren has correctly called for “big structural changes.”

Of course, we are all asking ourselves the same thing. How bad does it have to get before widespread rebellion? How many unarmed people of color will be gunned down by police? How many civil rights are going to be stripped? How rich can the elites get off of our labor? How much pain do we all need to feel before we rise up? It’s a natural question to ask by anyone suffering the nature of US capitalism. Unfortunately, Nader’s article rings tone-deaf. Like so many liberal arguments, it places the burden of rebellion on working class people while ignoring the mechanisms that kill revolt wherever and whenever it threatens to spark into life.

Although the elements that prevent substantial rebellion are many, they really boil down to just three. They are the not for profit industry, the leaders of what is currently mislabeled as, “The union movement”, and the Democratic Party. These three elements, all loyal to each other and working in unison, act as the front-line protective mechanism for US capitalism and the political class that serves it.

Many of you will be tempted to flail at this stage of the discussion. Aren’t the Republicans so much worse? Why would anyone attack the forces that are on our side after all they have done, even if they have some traits we may disagree with? The answer is quite simple. These forces are not allied with the types of changes our world desperately needs. They are not there to build, nor even prepare the ground for those types of changes. They act, instead, as the professional brokers of negotiated surrender for communities, workforces, and the environment. They are not building movements; they are preventing them.

What is a Movement?

What is a movement anyway? We hear the term tossed about as often as references to Martin Luther King Jr in every venue from the election of politicians to online petitioning. Although movements have changed the course of US politics for centuries, the essential qualities of movements are nearly forgotten today. In the 50 years that have passed since the civil rights and antiwar movements of the 1960s, the definition of “movement” has become the possession of the same institutions that have been most consistent in keeping new movements from forming.

Let’s look at some basic qualities of movements throughout history:

All of these qualities, synonymous with victories and grassroots power historically, are omitted from the dominant and promoted activism of today. Let’s take a look at who is writing the current narrative.

The Not For Profit Industrial Complex

Alongside any injustice taking place nationally, a cottage industry of professional activists and organizations arises. This occurs as soon as any outrage, protest, or other grassroots formation builds to the point of exerting even a minor amount of uncontrolled political power. As soon as sufficient people and attention are involved, not for profit organizations will be dispatched to commandeer, tame, and control the process. The not for profits are funded by foundations, dark money donors, or otherwise politically connected individuals. It’s easy to see why communities or other efforts fall into their influence. They have staff, networks, and resources that we don’t normally possess at the grassroots level. But in the end, they will lead people into the predictable forms of activism that have been the hallmark of the last 50 years of retreat before Wall Street and Washington D.C. The not for profits help you feel better about negotiating the terms of your defeat. They will not lead an effort, however, that threatens the political and economic elites in any meaningful way.

The US working class has been on a downward spiral for generations. Once a power that shook the ground and terrified the rich, and sent their politicians scrambling for ways to save US capitalism, the unions have seen decades of defeated strikes and retreat. Today, despite historic popularity, unions continue to lose strikes and membership, all the while handing hundreds of millions of dollars of hard-earned dues money over to politicians. What happened to the thunderous power of the labor movement? Was this what rank and file workers wanted?

After record-setting strikes in the 1930s and 1940s, US financial interests were able to gain dominant influence within union leadership. Throughout the 1950s revolutionaries were expelled from locals as the labor bureaucracy strengthened its ties and acceptance of the generalized dominance of the rich and powerful. The unions became a force that negotiated better conditions of exploitation and traded their power for a comfortable relationship with the bosses and political class. It became so dominant of a strategy that union officials coined the Orwellian term, the “Team Concept”, which promotes the idea that CEOs and workers can overcome their opposing interests and work together. It has meant ruin for the American working class and an unparalleled race to the bottom for workers globally.

Today the strategies of major victory are all carefully avoided within the union hierarchy. Even when places like Puerto Rico show definitively the effectiveness of efforts like a general strike, any discussion around such an idea is opposed by union leaders in the US. Why? Because it would risk the relationship of the union leaders and the owners of industry and government.

The result is that 13 million union members, who could collectively bring the functioning of the largest capitalist economy to a halt, have been reduced to scripted measures and political spectatorship.

All resources, assets, time, labor, money, ideas, organizing and initiative are offered to and consumed by this dominant organization of US business interests. The Democratic Party, we are informed, is the alpha and omega of our efforts to organize for justice. The power of the Democratic Party is so accepted that conventional activism has come to mean a simplified lobby effort aimed to influence their operations or talking points. No movement in history started out with the hope that electing the right politicians would save us. No movement ever exploded onto the world stage with the position that powerful interests were open to moral persuasion. But this is the promoted conclusion and focus leveraged upon all grassroots formulations.

When we accept this conclusion, that we can’t build a movement independent of the Democratic or Republican parties, by what force do we expect that they will change? And, even more, if we accept that the Democratic Party is our only political path forward, what specifically are the costs of maintaining that relationship? Given the nature of the Democratic Party, its owners, its ability to co-opt and control entire populations, what is the opportunity cost to staying within its good graces? It can only be one thing: The disarming of our power and any real threat of revolt. That is the price to ride.

The consequences of this are not academic nor intellectual. Simply look at the state of the environment, the conditions in any major city, the US prison population, the decline of the working class, the wars, systemic racism, poverty and deepening crisis everywhere and you will see the objective consequences of a people outsourcing our power to politicians.

The potential for forceful and effective revolt will be defined by its relationship to these three political forces. The more ties that exist between threatened rebellion and these forces, the more predictable and inert that rebellion will become.

Is There Any Other Way Forward?

Yes. Organized revolt has built occupations, urban insurrections, general strikes, and formed politically-independent organizations throughout history. The labor movement, the abolitionists, and the civil rights struggles all created political power sufficient to throw the system onto its heels and compel deep changes to government and industry. The examples aren’t confined to history either. In places like Kentucky and Virginia, rank and file teachers defied all convention and organized statewide strikes resulting in historic wage increases. Within the last five years, rebellion against racism and police brutality erupted in cities after the killing of Mike Brown in Ferguson. Standing Rock saw a historic assembly of First Nations to protect the water of the Missouri River from the Dakota Access Pipeline. Just this year a general strike in Puerto Rico removed Gov. Ricardo Rosselló from power. And let’s not forget that the work stoppage of rank and file airline attendants that defeated Trump’s attempt to keep the US government closed. It took all of 48 hours for that victory.

In every moment throughout history, forces from below threaten to find expression. It means the system has had to develop elaborate mechanisms to keep these forces in check, predictable, and historically inert. The role of regular people then, the working class, has to be to recognize how we are being maneuvered and by whom, and to overcome those mechanisms so we can build something powerful, independent and existentially threatening to the old order. If we can achieve that, revolt is only a moment away. And when it happens, it will rise to the level of the crisis that compelled it.

Ralph Nader: Why Isn’t the 99% Revolting? 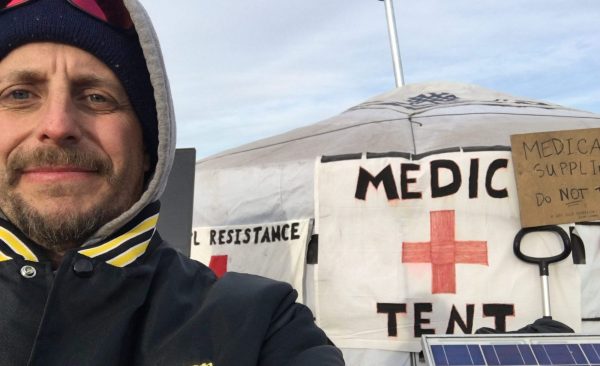 Cliff Willmeng is a registered nurse, writer, and activist in grassroots labor and environmental struggles. Born in Chicago, Cliff co-founded the Chicago Direct Action Network after participating in the historic uprising against the World Trade Organization in Seattle, 1999. As a union carpenter in UBC Local 1, he was in the leading body of Carpenters For a Rank and File Union which organized successful fights for building trades members across Chicago. After moving to Colorado, Cliff was at the center of the fight against oil and gas drilling known as “fracking”, and helped to found Labor For Standing Rock in 1996. He ran for Boulder County Commissioner as an independent socialist and union official in 2018, receiving nearly 13,000 votes. Cliff lives with his wife and two children today in Minneapolis, Minnesota.