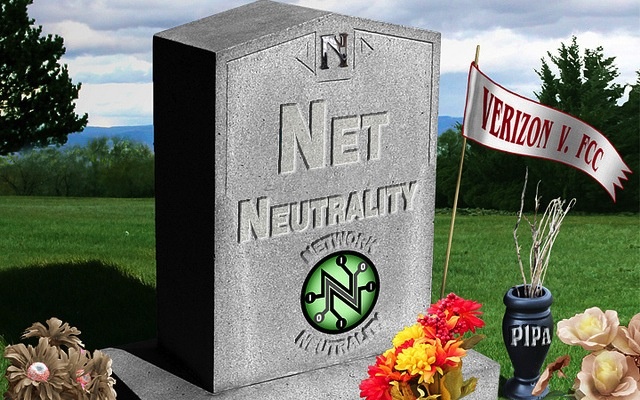 Former Comcast and Verizon attorneys now manage the FCC and are about to kill the internet.

Above photo: A tombstone for Internet freedom. Photo via Flickr user DonkeyHotey

The open Internet may soon become a thing of the past.

Earlier this week, the Wall Street Journal dropped something of a bombshell with leaked news that the Federal Communications Commission is planning to abandon so-called “net neutrality” regulations—rules to ensure that Internet providers are prevented from discriminating based on content. Under the new proposed system, companies such as Comcast or Verizon will be able to create a tiered Internet, in which websites will have to pay more money for faster speeds, a change that observers predict will curb free speech, stifle innovation and increase costs for consumers.

Like so many problems in American government, the policy shift may relate to the pernicious corruption of the revolving door. The FCC is stocked with staffers who have recently worked for Internet Service Providers (ISP) that stand to benefit tremendously from the defeat of net neutrality.

The backgrounds of the new FCC staff have not been reported until now.

Take Daniel Alvarez, an attorney who has long represented Comcast through the law firm Willkie Farr & Gallagher LLP. In 2010, Alvarez wrote a letter to the FCC on behalf of Comcast protesting net neutrality rules, arguing that regulators failed to appreciate “socially beneficial discrimination.” The proposed rules, Alvarez wrote in the letter co-authored with a top Comcast lobbyist named Joe Waz, should be reconsidered.

Today, someone in Comcast’s Philadelphia headquarters is probably smiling. Alvarez is now on the other side, working among a small group of legal advisors hired directly under Tom Wheeler, the new FCC Commissioner who began his job in November.

As soon as Wheeler came into office, he also announced the hiring of former Ambassador Philip Verveer as his senior counselor. A records request reveals that Verveer also worked for Comcast in the last year. In addition, he was retained by two industry groups that have worked to block net neutrality, the Wireless Association (CTIA) and the National Cable and Telecommunications Association.

In February, Matthew DelNero was brought into the agency to work specifically on net neutrality. DelNero has previously worked as an attorney for TDS Telecom, an Internet service provider that has lobbied on net neutrality, according to filings.

Around the time of Delnero’s hiring, FCC Commissioner Ajit Pai, a former associate general counsel at Verizon, announced a new advisor by the name of Brendan Carr. Pai, a Republican, has criticized the open Internet regulations, calling them a “problem in search of a solution.” It should be of little surprise that Carr, Pai’s new legal hand, has worked for years as an attorney to AT&T, CenturyLink, Verizon, and the U.S. Telecom Association, a trade group that has waged war in Washington against net neutrality since 2006. A trail of online documents show that Carr worked specifically to monitor net neutrality regulations on behalf of some of his industry clients.

Many have expressed shock that the Obama administration would walk back one of its biggest promises. On the campaign trail, Barack Obama said that he is a strong supporter of net neutrality. During a question and answer forum in Iowa, Obama explained, “What you’ve been seeing is some lobbying that says that the servers and the various portals through which you’re getting information over the Internet should be able to be gatekeepers and to charge different rates to different Web sites … And that I think destroys one of the best things about the Internet—which is that there is this incredible equality there.”

In his first term, Obama’s administration proposed net neutrality rules, but in January of this year, a federal court tossed the regulations in a case brought by Verizon. The decision left open the possibility of new rules, but only if the FCC were to reclassify the Internet as a utility. The Wall Street Journal story with details about the FCC’s leaked plans claims the agency will not be reclassifying broadband as a utility. The revised rules to be announced by the FCC will allow ISPs to “give preferential treatment to traffic from some content providers, as long as such arrangements are available on ‘commercially reasonable’ terms,” reports journalist Gautham Nagesh.

Critics have been quick to highlight the fact that chairman Wheeler, the new head of the FCC, is a former lobbyist with close ties to the telecommunications industry. In March, telecom companies—including Comcast, Verizon, and the US Telecom Association—filled the sponsor list for a reception to toast Wheeler and other commissioners. Many of these companies have been furiously lobbying Wheeler and other FCC officials on the expected rule since the Verizon ruling.

Notably, though the FCC staff tilts heavily in the direction of telecoms, Gigi Sohn, Wheeler’s advisor on external affairs, is the former CEO of Public Knowledge, an advocacy group that supports net neutrality.

But overall, the FCC is one of many agencies that have fallen victim to regulatory capture. Beyond campaign contributions and other more visible aspects of the influence trade in Washington, moneyed special interest groups control the regulatory process by placing their representatives into public office, while dangling lucrative salaries to those in office who are considering retirement. The incentives, with pay often rising to seven and eight figure salaries on K Street, are enough to give large corporations effective control over the rule-making process.

Of course, ISPs have many tools for shaping policy at their disposal. Giving cash to third party groups is another avenue for influence. Americans for Prosperity, the Koch brothers-funded non-profit political shop, aired deceptive advertisements claiming that net neutrality is somehow a plot by bureaucrats “to takeover the Internet.” Asian American civil rights group OCA was one of several nonprofits caught accepting telecom money while penning a letter to the FCC in opposition to net neutrality.

The revolving door, however, provides a clear and semi-legal way for businesses to directly give unlimited cash and gifts to officials who act in their favor. One of the most famous examples of this dynamic is the case of Meredith Attwell Baker, an FCC Commissioner who left her job right after voting in favor of the Comcast merger with NBC. Her next career move? She became a high-level lobbyist for Comcast, the company she had just blessed. Earlier this week, she announced her next gig, as president of CTIA, the primary wireless industry trade group. She’ll have her work cut out for her in lobbying her former colleagues. CTIA has already warned the FCC from taking up any new net neutrality regulations.

Lee Fang, a San Francisco-based journalist, is an Investigative Fellow at The Nation Institute and co-founder of Republic Report.