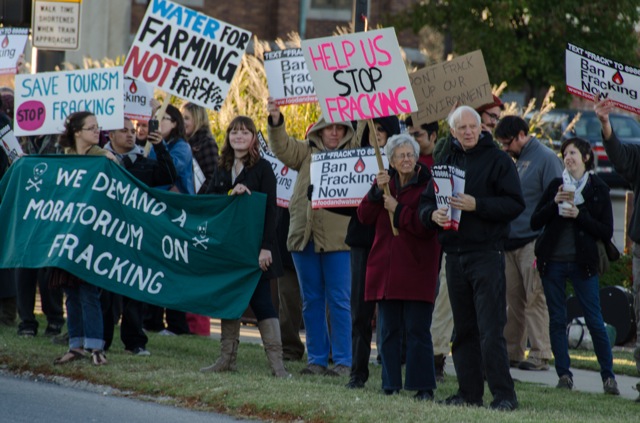 SAFE (Southern Illinoisans Against Fracturing Our Environment) is horrified at the decision of the Illinois General Assembly, and Governor Quinn, to put the water, air, soil, health, and economic future of Southern and Central Illinois at risk from horizontal fracking.  In the words of Tabitha Tripp of SAFE, ‘It’s a very sad time for Illinois. We have to fight our own government to keep our children and grandchildren safe from harm.’

SB1715 was negotiated behind closed doors, and was not based on scientific study, but rather on the question of what was politically possible, regardless of science.  The resulting bill is woefully inadequate to protect Illinois residents from the known harms horizontal fracking has brought to residents across America.  It also represents a denial of basic democracy for the residents of Illinois.

Josh Fox, in a House Executive Committee Hearing on May 21, pleaded with Illinois legislators to visit Pennsylvania to see what horizontal fracking has done to families there.  IL legislators refused this extremely reasonable, common sense request. Not one elected official has ever visited a fracking site.

SAFE strongly opposes fracking, and will continue to work with other groups opposed to fracking, advocate for victims, and push for a ban, until the practice is banned. We will pursue every avenue possible and will never, never stop fighting for a ban.

SAFE worked tirelessly to promote a fracking moratorium so that scientific studies could be considered, along with water usage & local issues. The Illinois General Assembly refused to consider this common sense approach. Obviously, campaign contributions are more important than the health and safety of the people they serve. It is a sad day for democracy, and for the future of Illinois.

from Sandra Steingraber and the people of Illinois to the nation

We know that high-volume horizontal hydraulic fracking, or HVHF, is an accident-prone, inherently dangerous industrial process with risks that include catastrophic and irremediable damage to our health and environment.

We know that HVHF and its attendant technologies:

We know these problems cannot be prevented by any set of rules or government office, let alone state agencies like those in Illinois, which have been cut to the bone by budget cuts and cannot be counted on for regulatory enforcement.

We have heard the warnings of our brothers and sisters living in the gas fields of Pennsylvania and Ohio, whose children, pets, and livestock are sick, whose property values are ruined, whose water is undrinkable.

We have heard the pleas of our neighbors in Wisconsin, Iowa, and Minnesota, where strip-mining for “ frac sand” has devastated communities, destroyed landscapes, and filled the air with carcinogenic silica dust. We are aware that our own beloved Starved Rock State Park is already threatened by industrial mining of silica sand used for fracking operations and that the pressure to strip-mine Illinois for sand will only increase with every well that is drilled and fracked.

We assert that fracking is a moral crisis. In a time of climate emergency, it is wrong to further deepen our dependency on fossil fuels. In a state such as Illinois, where chronic drought and water shortages are already forecast for our children’s future, it is wrong to destroy fresh water resources in order to bring new sources of climate-killing gas and oil out of the ground.

We reject the legitimacy of Illinois’ fracking regulatory bill, which was the result of closed-door negotiations between industry representatives and compromise-oriented environmental organizations. Responsible only to their funders and their members, these environmental groups do not represent us nor are they empowered to negotiate on our behalf. We consider the fracking regulatory bill to be a subversion of both science and democracy. Throughout its creation, no comprehensive health study or environmental impact study was ever commissioned. No public hearings or public comment periods ever took place. And yet it is the public that is being compelled to live with the risks sanctioned by this bill. It is an unjust law.

As such, no longer shall national environmental organizations based far from impacted realities make decisions that will have life-changing impacts on the people living in impacted zones. We will call out organizations that betray core values and integrity. We will openly inform their membership and their funders and reveal the truth of where they stand and at whose expense.

We call for a mobilization that brings fracking realities to the rest of the nation. If our elected officials refuse to visit the fracking fields, then we will bring the fracking fields to them—in the form of science, stories, photographs, film, lectures, hearings, and journalism. If elected officials refuse to defend our land, water, air, and health against those who would despoil them for their own profit, then we will do it ourselves, using peaceful, nonviolent methods.

We hereby commit ourselves to building a powerful movement that will protect Illinois’ children—and safeguard the living ecosystem on which their lives depend—for generations to come. In short, we declare our intent to take the future into our hands. And that future is unfractured.