I’m On Hunger Strike In Guantánamo

I Dream of Cooking for My Family.

There are very few freedoms at Guantánamo Bay prison, where I have been held without charge or trial — referred to as Guantánamo ISN 1461 — for over 16 years. The right to starve myself is one of them, but even then, they force-feed me, to spare themselves the embarrassment of my death.

Back in Pakistan, before I was kidnapped and tortured and flown halfway around the world in chains, I loved cooking. There is nothing more satisfying than preparing a hot meal for your family and sharing it with them. Here, I am allowed to cook for my fellow prisoners, but only in a microwave, and the guards could take even that away at any time. I never eat the food myself. I have been on hunger strike for seven years in protest at my indefinite detention. When everything else has been taken from you, this small measure of self-determination means a lot. 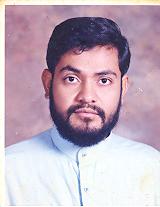 This photograph shows Ahmed Rabbani in Karachi, Pakistan, before he was sold to the U.S. for a bounty in 2002.

I was abducted from my home on September 10, 2002, and sold to the U.S. for a bounty, with the false story that I was a terrorist called Hassan Ghul. As a result of that, I was taken to the Dark Prison in Kabul, and tortured for 540 days. I refused to say I was Hassan Ghul because I wasn’t. Eventually the U.S. captured Ghul, and because he was deemed “cooperative,” they let him go. He went back to his old ways, and was killed by a drone in 2012.

I was rendered to Guantánamo in September 2004. I tried to obey the prison’s foolish rules for a long time before I gave up. I began hunger striking in earnest in 2013 when my patience finally ran out. Twice a day, they strap me into their torture chair and force a 110-centimeter tube up my nose.

My lawyers have now created a website where, as I approach 3,000 days on strike, you can follow my gradual disappearance. I was 170 pounds when they first seized me, and I am now down to 80 pounds. This means that 53 percent of me has “escaped” from this prison. It can’t go on forever of course, and I hope that I don’t get shipped home in a coffin — but I have to do something to peacefully protest.

This would be hard enough for anyone, but for a man like me who loves to cook and eat, it is even worse. Can you begin to imagine the torture when I make meals for my brethren here, but do not eat myself?

All I have to sustain me are dreams. When I get out of here, I dream of opening a restaurant where I will cook only the most original food from our society, food that has existed for centuries. I will give you one example which perhaps you would like to try.

I call it a “Rabbani” as it is my own take on an ancient tradition: I am ethnically Rohingya, but I am a Pakistani citizen and lived for many years in Saudi Arabia. The name of a similar dish among Arabs is “harisa” or “hareesa” and it is very spicy. My wife used to make it the Pakistani way: It is called “haleem” and has lentils with less spice. My innovation was to blend the cultures, using the spice of Arabia and the lentil flavor of Pakistan.

Take whole wheat and soak it all night, with half as much weight in lentils. The next morning boil the wheat and lentils together in water for at least one hour, adding some spices — whole spices, not powder — plenty of cinnamon, cardamom and cloves.

Meanwhile, fry some onion — cut very thin — in oil to begin with, but I generally add butter or organic ghee as they soften. Then add pepper and ginger.

Now the meat. Lamb was my favorite, with a bit of fat. It should have been boiled beforehand until tender.

Then mix everything for many minutes. It must be done by hand with a spoon, over the fire — never use a machine for this. Adding a little milk will lighten the color.

Here at Guantánamo, I don’t have the ingredients for a Rabbani, so when I cook for the other men, I must make do with lentils. Last night I soaked some so that they would be ready after my call with my lawyer. One day, when I go back to my wife and family in Karachi, I hope to be able to make the dish properly once again.