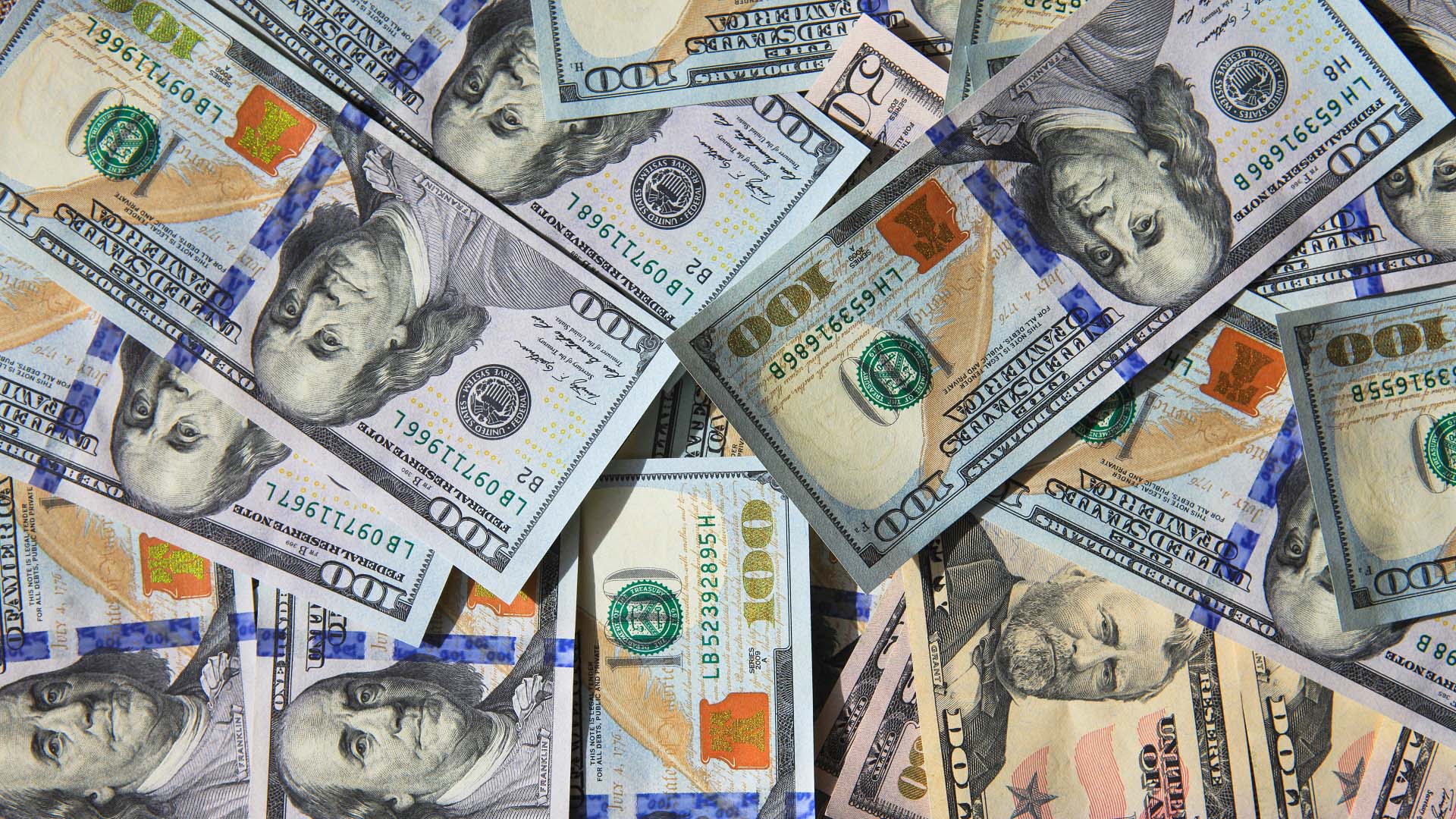 Due To Rise Of Chinese Yuan, Sanctions On Russia.

The US-dominated International Monetary Fund (IMF) has acknowledged that the hegemony of the dollar is in noticeable decline.

At the same time, the Chinese currency, the yuan or renminbi, is slowly growing in influence, along with other currencies, according to the IMF.

Meanwhile, the IMF noted that there is a rise in “nontraditional currencies” from smaller countries being held in international reserves.

The United States has veto power over IMF decisions, and the institution is notorious for acting as an instrument of US political influence.

Economist Michael Hudson has explained that “the IMF was created as an arm of US foreign policy,” and that Washington has historically weaponized the fund “to use debt leverage to force other countries to impose austerity on their populations, and to essentially say we will control what government you have, because if your government does something that the United States officials don’t like, we’re just going to raid your currency, force of austerity on you, and you’ll be voted out of power.”

The IMF has helped maintain the US dollar as the de facto global reserve currency since the fund was created in the 1944 Bretton Woods Agreement.

Hudson showed in his book “Super Imperialism: The Economic Strategy of American Empire” that Washington has used the power of this global reserve currency status to essentially make other countries pay for its wars.

But the dollar’s power is eroding, and even the IMF has begun to publicly acknowledge this fact.

The International Monetary Fund published a working paper on March 24 titled “The Stealth Erosion of Dollar Dominance: Active Diversifiers and the Rise of Nontraditional Reserve Currencies.”

The report documents “a decline in the dollar share of international reserves since the turn of the century,” with central banks around the world increasingly diversifying their holdings.

The study notes that this “decline in the dollar’s share has not been accompanied by an increase in the shares of the pound sterling, yen and euro, other long-standing reserve currencies and units that, along with the dollar, have historically comprised the IMF’s Special Drawing Rights.”

Instead, “the shift out of dollars has been in two directions: a quarter into the Chinese renminbi, and three quarters into the currencies of smaller countries that have played a more limited role as reserve currencies.”

The researchers describe this “evolution of the international reserve system in the last 20 years” as a “gradual movement away from the dollar.” 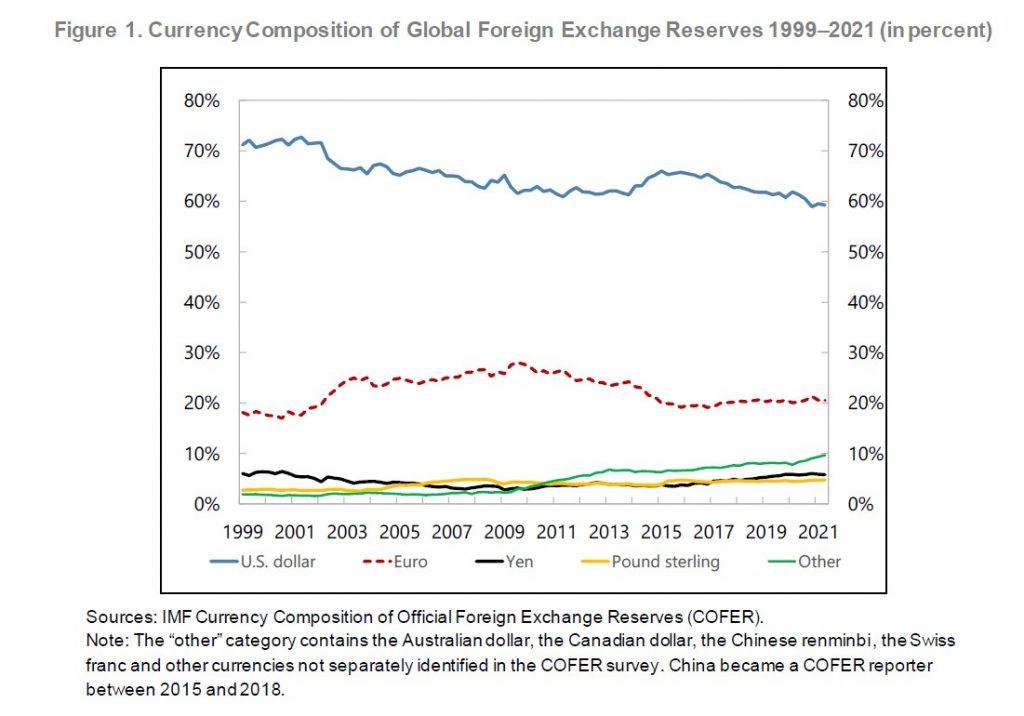 The IMF working paper explained that “the decline in the dollar’s share has been matched by a rise in the share of what we refer to as nontraditional reserve currencies, defined as currencies other than the US dollar, euro, Japanese yen and British pound sterling.”

In addition to the Chinese yuan, some of these “nontraditional currencies” that are becoming more prominent include the Canadian dollar, Australian dollar, Korean won, Singapore dollar, and Swedish krona.

But as of 2021, the share of nontraditional currencies had shot up to 10% – and there is every indication that this figure will only keep growing. 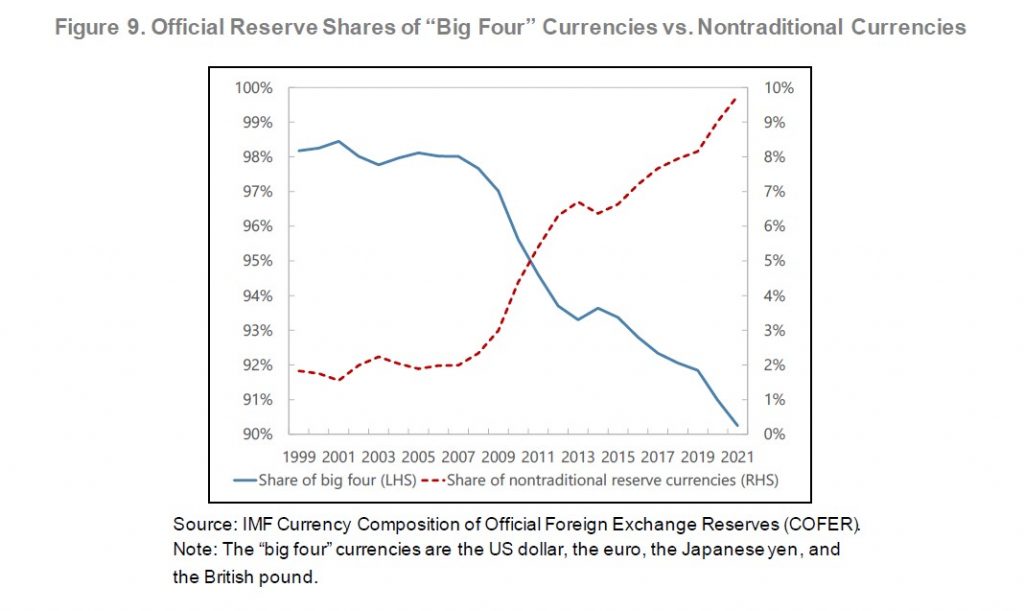 The IMF report noted that this “shift is broad based,” identifying 46 central banks that have been diversifying their holdings with nontraditional currencies.

The euro is unlikely to challenge US dollar hegemony. The article pointed out that the “euro has gained little ground as a reserve currency since its creation in 1999,” remaining relatively static at around 20% of global reserves.

Yet “while the renminbi has gained some ground, it remains leagues behind the dollar as a form of international reserves,” the researchers added, on a cautious note.

The working paper was authored by Barry Eichengreen, a professor of economics at the University of California, Berkeley, along with IMF economists Chima Simpson-Bell and Serkan Arslanalp.

Their study concludes that, while the dominance of the US dollar is far from over, and certainly will not end overnight, its power is waning.

A top official at the International Monetary Fund made remarks reflecting this historic shift, in a report by the Financial Times, titled “Russia sanctions threaten to chip away at dominance of US dollar, says IMF.”

The mainstream British newspaper interviewed the IMF’s first deputy managing director, Gita Gopinath, and wrote that the crushing Western sanctions imposed on Russia over its invasion of Ukraine, “including restrictions on its central bank, could encourage the emergence of small currency blocs based on trade between separate groups of countries.”

The senior IMF official conceded that “fragmentation at a smaller level is certainly quite possible,” although she added that the US “dollar would remain the major global currency even in that landscape.”

The IMF executive acknowledged that the world “might see some slow-moving trends towards other currencies playing a bigger role [in reserve assets]” held by countries’ central banks.

“We are already seeing that with some countries renegotiating the currency in which they get paid for trade,” Gopinath added.

Western sanctions on Russia – one of the world’s largest exporters of oil, gas, wheat, and fertilizers – have forced Moscow’s trading partners to seek alternative payment mechanisms.

Despite the sanctions, the European Union still gets 40% of its natural gas from Russia. And the Kremlin has demanded that Europe pay for this gas in Russian rubles.

China and Russia have also moved toward boosting their bilateral trade in each other’s currencies. Western sanctions pushed Russian financial institutions, including both state-owned and private banks, to encourage clients to open accounts in Chinese yuan. Bangladesh has said it is considering using yuan to evade sanctions and continue trading with Russia. Even India, which has a right-wing, pro-US government, has created an alternative payment mechanism using rupees and rubles, to get around Washington’s sanctions. The IMF has been careful, however, not to overstate the drop in US dollar holdings in international reserves. Gopinath, the IMF official, predicted that “the dollar’s dominance will stay for a while.” While US dollar hegemony is not going to suddenly disappear, it is facing more and more challengers.