IMF Is Choking Tunisia. No Wonder People Are Protesting

Above Photo: ‘As long as Tunisia continues these deals with the IMF, we will continue our struggle.’ Protesters clash with police on the streets of Tunis earlier this month. Photograph: Zoubeir Souissi/Reuters

Since the 2011 uprising, the IMF – backed by the G8 – has imposed economic reforms on Tunisia, at a cost to ordinary people

Tunisia has been facing protests across the country at price and tax rises since 3 January – the anniversary of the “bread riots” which occurred in 1984 under the Habib Bourguiba regime. As with the current unrest, that uprising was triggered by an intervention into the country’s affairs by international financial institutions, and the subsequent shock to the livelihoods of Tunisians – specifically, an increase in bread and grain prices following the adoption of an IMF plan.

It is impossible to understand these latest protests without understanding the role of international financial institutions, especially the IMF, in imposing austerity on Tunisia since the popular uprising of January 2011. In the months after the revolution, western governments and institutions were looking for a way to prevent countries from questioning the neoliberal model. They found a solution at the G8 summit in Deauville, France in May 2011.

With the Deauville Partnership with Arab Countries in Transition, a coalition comprising the G8 countries, Turkey, the Gulf countries, the IMF and World Bank established a deal to address the revolutionary processes that were unfolding in Arab countries at the time. Huge loans were offered to Tunisia, Morocco, Jordan, Yemen, Egypt – “Arab countries in transition” – in exchange for pushing through a host of neoliberal institutional reforms. The IMF and others took advantage of the unstable situation and the weaknesses of those countries to force through the moves.

Tunisia had little ability to renegotiate the terms it was being offered. The Deauville Partnership has been a cornerstone of the economic reforms adopted in my country during the transition period, but also in other Arab countries like Morocco, Egypt and Jordan, with the IMF acting as the main driver.

The results of Deauville go a long way to explaining the protests happening today. Since 2011, Tunisia’s foreign public debt has increased substantially – 41% of GDP in 2010 has become 71% in 2018. Since 2017, Tunisia’s debt payments have ballooned, with all the loans from foreign lenders who had granted grace periods after the revolution now requiring repayment. In 2018, debt service payments will reach a record 22% of the country’s budget.

Tunisia has needed two more IMF loans in the intervening period, in 2012 and 2016, which came with further strings attached – including reducing the budget deficit and implementing austerity measures which increased prices further. 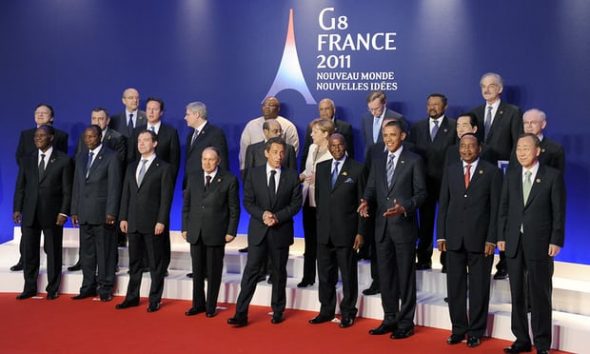 ‘In the months after the revolution, western governments and institutions were looking for a way to prevent countries from questioning the neoliberal model. They found a solution at the G8 summit in Deauville, France in May 2011.’ Photograph: Jewel Samad/AFP/Getty Images

With the second loan, the IMF exerted sustained pressure on Tunisia, and more specifically on the Tunisian Central Bank, to stop intervening in the currency markets to defend the value of the Tunisian dinar. The result of the dinar’s (imposed) depreciation has been to increase imports at a time when the main exports (phosphates and tourism) are in crisis and cannot offset these new costs. Tunisia is a net import country, so this measure contributes highly to price increases, raising public debt ratios and external debt service.

This all culminated in a new law, which came into effect in early January, and which sparked the protests. To reduce the budget deficit, the government was asked to reduce spending through recruitment freezes, early retirement and wage freezes in the public sector, and increase state revenues through indirect expenditure taxes. Price increases have been deepened by a rise in VAT and consumption taxes – the most unprogressive forms of taxation, paid by everybody no matter what they earn.

This has meant less money in the pockets of the poorest as well as the middle classes who bear the tax burden. The most vulnerable in our society are suffering, the middle classes are impoverished – and the brain drain has been accelerated by the dinar depreciation. A sense of injustice is growing, fed by the unfair distribution of the tax burden, the absence of a real effort to tackle tax fraud and evasion, the high unemployment level and the inequality of wealth in the country.

The current context for change is less favourable than in 2011, but the growing protests are clearly a signal that the economic situation is no longer sustainable. Read the words of Warda Atig, a Tunis-based protest organiser: “As long as Tunisia continues these deals with the IMF, we will continue our struggle. We believe that the IMF and the interests of people are contradictory.” An escape from the submission to the IMF, which has brought Tunisia to its knees and strangled the economy, is a prerequisite to bring about any real change.