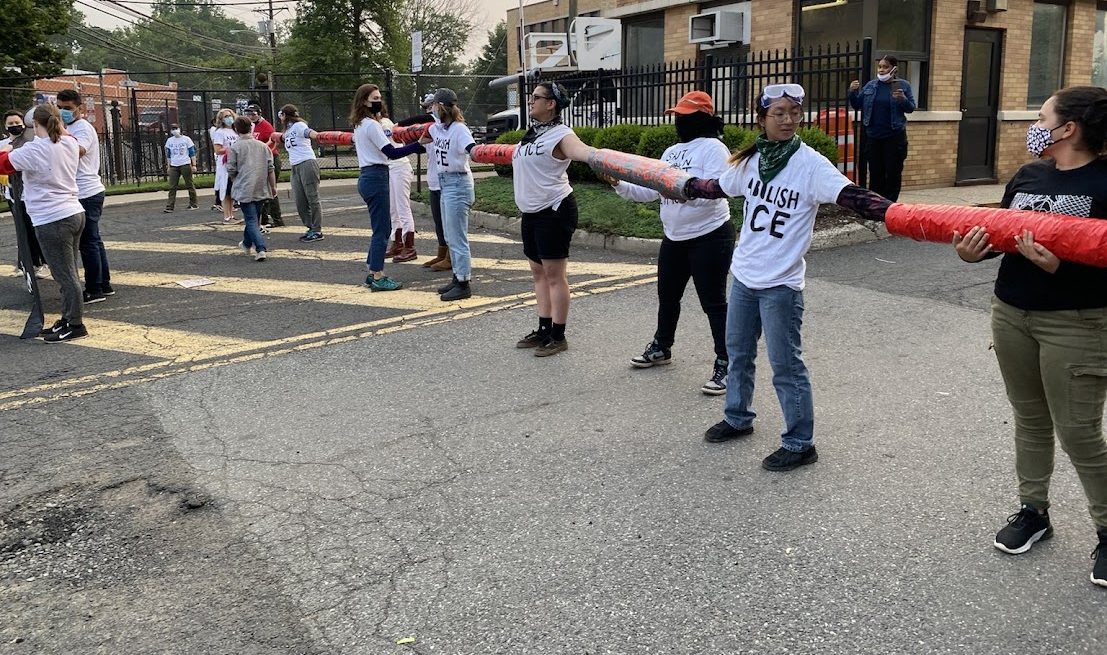 Newark, NJ — Immigrant leaders and immigration justice organizers chained themselves together and blockaded the entrance of the Newark SAC office in response to escalating abuses by ICE. Protesters are calling this unidentified office located in a desolate industrial neighborhood in Newark, NJ an “ICE black site”; and are demanding #ReleasesNotTransfers as detainees continue to be transferred out of New Jersey jails to detention centers across the country and away from their families. Advocates say this Homeland Security Investigations office is where unmarked vans bring detainees and ICE processes all deportations and transfers in the state, a “transfer roulette” brought to a halt by the blockade today.

“Every day ICE abducts people from their homes, their workplaces, their communities. Every day ICE transfers people in detention in the dead of night from one location to another, without telling people why or where they are going, without notifying family or lawyers. Every day ICE deports people to their possible deaths, to permanent exile away from their families and communities. In New Jersey, all of this ICE terror is organized through this office and we are here to expose it,” said Haydi Torres, an organizer with Movimiento Cosecha.

While grassroots pressure forced Essex County to announce in April it was ending its contract with ICE, advocates are seeing detainees be transferred rather than released. Bergen and Hudson County Jails are facing similar pressure and people statewide have organized to introduce and pass a bill that bans future ICE contracts, yet advocates fear transfers will continue and are demanding the release of all people in detention in New Jersey and across the country. Detainees have organized multiple hunger strikes in the last two years, protesting horrific conditions, the lack of COVID safety measures, and the abusive nature of the transfers themselves. People inside, like Patrick Julney, say that the transfers are also a method ICE uses to retaliate against people who organize and demand freedom. “Transfers are a weapon,” Julney says.

Alex Kamara’s transfer from the Bergen detention center to Arizona on July 13 is graphic illustration of just how brutal that weapon is. “From Frelinghuysen Avenue [the site of today’s action], they forced us to sign papers,” he said. “About six guys jumped us, slammed us to the road. And after that we got chained hands and feet and they drove us over to Newark airport.” Kamara has been outspoken against ICE tactics to repress hunger strikers and Black people detained by ICE.

“I live in fear every day,” Laura Julney said, “fear that that they will transfer my husband and I will not be able to see him anymore.” Laura’s husband Patrick has been detained by ICE at Bergen County Jail for over two years. “It’s the only time we truly have peace, when we can see each other smile and laugh, and find a moment of escape in each other’s eyes.”

Immigrant leaders and organizers are demanding an end to ICE transfers and called for the immediate release of people in detention. They are also urging Gov. Murphy to sign S3361, a bill the would ban future ICE contracts in the state, and for New Jersey and New York’s senators to put pressure on DHS and the White House to stop the transfers and release people in detention. With the Biden administration and Democratic leadership talking about the opportunities in the budget reconciliation bill and being outspoken in support of Dreamers after the latest DACA decision; advocates are questioning how the current administration can be so public about its support of immigrants but continue to terrorize and kidnap people to these unmarked locations.

“We have to remember that Democrats deport, too. We’re tired of living in a culture of mass deportations, deportations that happen under both Democratic and Republican administrations,” Torres said, emphasizing the role of immigration detention in the larger mass incarceration system. “It’s all a pipeline that feeds the system with new bodies to profit from. The jails can end their ICE contracts, but they are replacing the empty beds by criminalizing others. The criminalization of people of color, whether in ICE detention or county jails, is a single system. We cannot celebrate the closure of detention centers if comes at the expense of criminalizing and caging others.”